Chaser convergence- getting even worse.

Sean Ramsey said:
Mangum and Eads were darn near unchasable because you couldn't keep up with the storms (due to wrecks).
Click to expand...

I would definitely beg to differ.

Ben Holcomb said:
I would definitely beg to differ.
Click to expand...

Well, it seems we are all done getting our panties in an uproar about chaser convergence for 2019. Hello Northern plains summer pattern. See you again May of 2020!!

I have started a new thread for a post-mortem on this season's traffic issues:

OK, now that the bulk of the "mainstream" chase season is over, let me make sure I'm correct. I like to quantify these things into hard facts which I will be including on my chaser traffic web page. We had three (3) events this year where chaser traffic reached critical levels...

Ron Cross said:
Way to many "THRILL SEEKERS." Who do nothing but get in the way. Oklahoma has SB 1126 I believe this may help greatly to reduce the thrill seekers who get in the way of Emergency Management.
Click to expand...

I read that bill. It has some good stuff in it. Did Oklahoma pass it?

Dennis Hammers said:
I read that bill. It has some good stuff in it. Did Oklahoma pass it?
Click to expand...

All that i can find is that it died and still is.
Not coming up again for voting.
Reactions: Dennis Hammers

The bill was introduced but died. I caution everyone on such laws. If they were to pass, I seriously doubt they could be enforced. If for some unimaginable reason they were enforced, even partially, then the only individuals on the road would be the chasing "elite." It's not going to happen.

It is apparently dead, with no action taken since last winter. It didn't even get out of committee for a full vote. However, the wording as proposed is nebulous anyhow. It allowed EM to "monitor and coordinate" volunteer efforts, but it doesn't specifically prohibit chasing either. I'm sure they realized it was largely unenforceable, since anyone can use a public right-of-way unless the road is simply shut down.

It is possible to avoid the crowds sometimes ... this was my view all day on the 21st in Colorado. It's those weekend high risk days that are hard but easier if you stay ahead of the storm. Once a storm hits people it only takes one to slow up the parade. I just try to stay away and only use paved roads if it is a must. 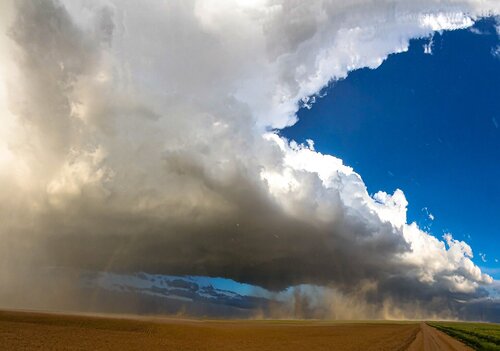 This kind of seems to be a May/Southern Plains problem

I’ve never seen chaos in the north. 5/17 in NE was thick, but I thought it was very manageable.

I've seen convergence later in the year farther north. I recall several chases with convergence in June 2014 in Nebraska and not just Pilger.

It does get worse to the south in May, but I do strongly favor the Northern Plains. If June was more reliable and I had better flexibility in my scheduling, at this point, I think I would favor a chasecation in June over mid/late May. One of the main reasons is avoiding chaser convergence, but it's also that June tends to feature slower moving storms and broader, more diverse target areas.

I will say this, chaser convergence has dropped off sharply since May ended, even though some would argue the pattern has also dropped off, aside from a bit of an uptick last week.
Reactions: Brian Noble
You must log in or register to reply here.
Share:
Facebook Twitter Reddit Email Link
Top Bottom