Warren Faidley said:
It would be interesting to go back and evaluate long-range model accuracy for this odd season. Glancing through the posts in this thread, several of the long range predictions were in error. I'm still waiting for the "amazing" season Accu-wx predicted. Maybe they were talking about the monsoon? lol
Click to expand...

Without looking at objective verification stats, I'd argue the worst subjective flaw in medium-to-S2S range modeling this year was the month-long stretch from early April to early May when there was always a classic Plains severe weather pattern in the offing at days 10-20. Of course, it never materialized in any form or fashion. (Yes, there was a stretch of chase opportunities from about May 15-25, but they came admist a pattern that was far from textbook and bore little resemblance to aggressive medium range predictions earlier in the season). Since the second week of May or so, NWP depictions of the big picture for the 1-2 week range have seemed to settle down and have performed reasonably well. In fact, nightly GEFS runs even nailed the nauseating, detestable June that's now all but locked in.

The 00z GEFS now integrates out to 840 hours (35 days, for those keeping count at home), and essentially every run asymptotes toward an upper high over Chihuahua and trough over Quebec as the primary NA features at 500 mb throughout weeks 3-5.
Click to expand...

Bear any resemblance to the 500 mb analysis the past week, or the 500 mb forecast for any snapshot from any ensemble run you can pick over the next two?

The fact that seasonal modeling from 6+ months out, along with the GEFS 4-5 weeks out, had such strong signals for this kind of outcome is something I can't get off my mind. With the usual disclaimer that I have no formal background in climate or even S2S modeling, it stands to reason there's something in the boundary conditions (meaning SSTs, land/soil state, polar sea ice, etc.) that made this predictable, even as certain teleconnections at times argued for classically active periods this spring. The burning question for all of us, of course, is how persistent the cause(s) may or may not be as we move years into the future.
Reactions: JamesCaruso, Warren Faidley and Andy Wehrle


https://twitter.com/i/web/status/1402705688762236943
I seem to recall 2005 was regarded as a pretty bad year for chasing, and yet this happened in June. In good years during that stretch, a day like this would be relegated to the "honorable mentions" section of someone's year-end highlight reel.

Had something like this happened in 2021 (May 26th was close, but not the same), you'd have people with this facial expression the entire time they were typing their REPORTS thread post:
View attachment 21836
Click to expand...

I really do think the obvious lowering of standards, both for forecast events and post-events, is a good, holistic marker of how things have changed over the past 10-15 years. There are plenty of non-meteorological factors that may contribute, but still.

A few times over the past week, I've loaded the latest ensembles and quickly found myself an ill advised click away from a social media tirade that wouldn't be worth the blowback... so I've decided to redirect that saltiness toward pushing along some ERA5-based season scoring efforts I dabbled in last summer. Here's a tease illustrating just how far the month of June has fallen: 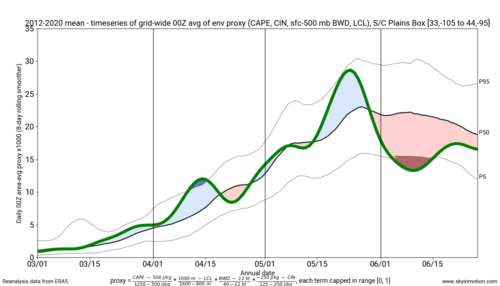 In short, this suggests that between 2012-2020, the entire month of June underperformed 1950-2020 climo as a whole by a large margin WRT coverage of reasonably favorable Plains environments. For early-mid June, 2012-2020 mean coverage is frequently under the 5th percentile for what you'd expect of random 10-year draws from the full 60-year distribution. Also plainly evident is the mid-late May spike in favorable environments, corresponding to what many of us have called the "compressed seasons" of recent years. Basically, it's been a good period to chasecation within the traditional May 15-30 window, but middling to awful outside of that. In fairness, early-mid April have also offered favorable environments significantly more often than the 60-year climo as a whole, although the absolute payoff to chasers so early in the year is fairly limited.

Now consider that when I'm able to add 2021 in a few weeks, the 10-year running coverage for June will very likely -- astoundingly -- fall even further. For all the talk of the sky falling and climate change wiping out all convection that can at times have an irrational, knee-jerk component, June is the segment of the core Plains season I'm really worried about going forward. This run the past 10 years is appalling from just about any perspective. When you combine the empirical data on environments over the past decade with fairly uncontroversial impacts from AGW, including warming Gulf SSTs (e.g., the NHC talking about moving the official start of Atlantic hurricane season to mid-May), there's a lot to unpack.
Reactions: Brett Nickeson, JeremyS, Jeff House and 5 others

I'm always out more or less the last 2 weeks of May. This year I had some success in eastern CO and also caught Selden. Of course, I made some mistakes. Leaving the storm near Kim in particular stings. But there is always more to learn.

Nice, if depressing, work there @Brett Roberts . This suggests an objective decline in recent chase season quality, at least for June, independent of an individual chasers' luck/skill in timing their vacation/scoring on localized/"mesoscale accident" setups.

In 2015-16 I timed my vacation for the first week of June because it historically has been a good period for the C/N Plains and upper Midwest. Obviously this was not a good period of time to do that.

Your note about warming Gulf SSTs is interesting because I had hopes that would help ameliorate early season moisture issues. However it doesn't seem to be the case, or else other negative factors are overwhelming it, because we have seen three of the past four springs (2018, '20 and '21) plagued by moisture quality/depth issues even deep into May.

Alex Elmore said:
I have a somewhat rosier look on this season than others, but my bar has always been pretty low. I started chasing in 2012, and with the exception of 2020, I've chased every year since. I don't believe I've ever been on the storm or tornado "of the year/season" due to not living in the Plains and being restricted by work or, for several years, school. Given how frustrating 2019 was and that 2020 was non-existent for me, my bar may have been set a little lower this year, but I feel that my view of this season comes from a more probabilistic mindset when it comes to forecasting and chasing. Additionally, I've gotten more into photography, so I'm happy just seeing a well-composed, beautiful scene and don't need the "THE MOST [ADJECTIVE] [ADJECTIVE] [ADJECTIVE] STORM/TORNADO EVER" to consider a chase a success. I saw a couple of tornadoes, a couple of good storms, new places, and in general experienced new things, so I'm content with my spring 2021.

Through my 11 day period (May 18 - May28) out in the Plains, it seems like the most of the storms of the day were low-probability, high-reward targets that even in hindsight, I'm not sure if I would have gone after. And I'd argue that the "high-reward" mostly comes from seeing something almost completely by yourself while nearly everyone else is on the main target a couple hundred miles away. I've chased plenty of setups like that before and ended up with a blue sky or complete crap of a storm while the main target verifies nicely. While I understand they're low-probability so they're not going to verify often, it's just not worth it to me to go after anymore.

I'm fairly happy with the targets I picked, with the exception being May 26. The environment was definitely conducive in SW/W Kansas where I sat most of the day, but from what I recall, the CAMs were more consistent with convection in the TX Panhandle and along the KS/NE border in the days leading up, and then central KS the morning of...all locations that experienced supercells and tornadoes that day. I was able to salvage the day by heading north and catching some structure as the sun set, but it was a frustrating day that I started dreading when I woke up. The bigger the hype, the harder the fall.

While not living in the Plains greatly limits chasing potential, and putting all your eggs in one basket by picking a week or two each year can be risky, I do like the idea of making the trip and basically being "forced" to chase. I'm not going to drive 12 hours from home to chase a marginal setup in CO, but if I'm already out in the Plains, then why not. I've gotten some great storms on marginal setups. With that logic and that this year was a bit of a redemption after the last couple crappy years, I'll give 2022 a spin.
Click to expand...

This is almost exactly where I am coming from. A bad day chasing is better than a good day working!
Reactions: Alex Elmore

Jeff Duda said:
Had something like this happened in 2021 (May 26th was close, but not the same), you'd have people with this facial expression the entire time they were typing their REPORTS thread post:
View attachment 21836
Click to expand...

I think that is how I looked on Monday while sitting in my car outside of my hotel in Longmont enjoying some Colorado items when I looked over and saw a tornado.
Reactions: Alex Elmore, Paul Lemery, Brett Nickeson and 3 others

Ben Holcomb said:
I think that is how I looked on Monday while sitting in my car outside of my hotel in Longmont enjoying some Colorado items when I looked over and saw a tornado.
Click to expand...

Now consider that when I'm able to add 2021 in a few weeks, the 10-year running coverage for June will very likely -- astoundingly -- fall even further. For all the talk of the sky falling and climate change wiping out all convection that can at times have an irrational, knee-jerk component, June is the segment of the core Plains season I'm really worried about going forward. This run the past 10 years is appalling from just about any perspective. When you combine the empirical data on environments over the past decade with fairly uncontroversial impacts from AGW, including warming Gulf SSTs (e.g., the NHC talking about moving the official start of Atlantic hurricane season to mid-May), there's a lot to unpack.
Click to expand...

Extremely interesting stuff, Brett. Pretty much confirms our anecdotal speculation that the season is growing shorter and June chasing is all but a distant memory. Outrageously depressing for those of us north of I-70 that depend on the month of June for most of our setups. The best chasing of the year used to happen about this time, when crowds and storm speeds are taken into account.
Reactions: Dean Baron and Paul Lemery

Brett, I'm curious, can you do the same analysis on Dixie alley? Like western MS over to central GA between Tennessee and a Hattiesburg-Dothan-Valdosta line? It seems to me that Dixie has been ramping up a bit more, tornadoes used to be a bit rarer in Georgia it seems, but I was also paying much less attention until recently.
Reactions: Michael Norris
You must log in or register to reply here.
Share:
Facebook Twitter Reddit Email Link
Top Bottom