Mike Olbinski and his vehicle/group reported having their windows busted out by intense winds and hail last night near Wallace, KS.

I’m not passing immediate judgment, but I thought this might be of interest, with it involving a well-known chaser and him saying it was a “surprise” incident.

I'd believe him. Their main goal is time lapse photography and they usually keep a farther distance from that type of stuff. From what I heard, there were several other chasers who lost their windows there as well and most were just gassing up at the end of their day. I don't think any of them expected it to be THAT intense, but its always a possibility!
Reactions: Greg Ansel

Apparently it was little pebbles as much as hail that broke windows.
Reactions: Greg Ansel

I was one of the chasers who was in that wind/hail/pebble fest. While not surprised at the speed of the wind (the storms were moving east quite fast +45 mph and had rotation and strong very cold inflow and outflow), it was the amount and type of debris that caught us off guard. Lots of small rocks, pebbles, and small hail shattered all of the chasers west facing windows. I have hail guards on my windows with 1” grids, but the small size coupled with the speed and direction the stones were traveling (pretty much horizontally), most windows didn’t have a chance. If you watch Chris Collura’s Facebook video, you can see the event. There was an initial strong wind/sand only event that lasted about 10-15 seconds, followed by about a minute of calm. Then came the strong straight line winds/pebbles/hail for almost 10 minutes which did most of the damage. Tornado sirens went off and the power went out around the gas station we were at. I have since replaced those broken windows on my vehicle with lexan. Crazy storm.
Reactions: Shawn Schaefer, JohnHuntington, David Williams and 3 others

I followed the storm for a long while and got in the winds many times. The surprise to me was how much it intensified and how quickly. I faced my truck into the wind as I got hit by the storm. The winds snapped two power poles beside me and I saw some power flashes.

Here is a couple videos ... First is the front dash cam. Notice after most of it passed I turn and there is power flashes and the snapped poles on the left. The second video is the rear cam with sound.

My truck after getting hit by the storm 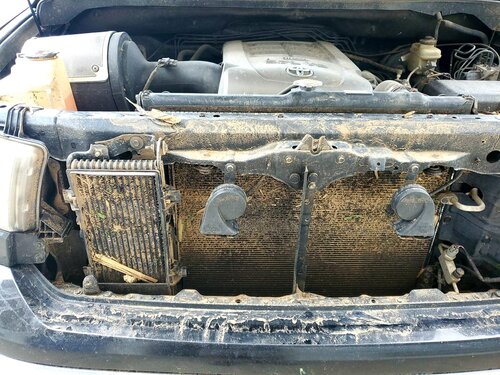 Just another one of the many risks we take when we venture out into storms. It's intensified when people who don't know much about the storms start taking people out like they are an expert. Why would you be surprised by a downburst? The 12z DDC sounding from Friday had 1800 DCAPE on it with nearly dry adiabatic lapse rates from 850mb-500mb. They unfortunately did not launch a 00Z sounding it looks like, but nonetheless it would seem likely to have large hail and downbursts in that kind of environment considering how dry the air was.

But the HRRR didn't show downbursts on the updraft helicity tracks so how would we even know?
Reactions: Nick Dewhirst, Ethan Schisler, Alex Elmore and 1 other person

"Surprise" means "an unexpected or astonishing event, fact, or thing." A microburst in a decaying story is not an astonishing event, but I'm sure Mike wasn't expecting it. I've been caught in a microburst before and I can tell you one radar paint things look fine and the next minute you can't see 1 foot in front of your windshield. Looking back at the event I should have expected it, as signs where there, but hindsight is always 20/20.

I don't see this as being negligent or reckless. We need to be careful not to go over the top whenever something like this happens. I was caught up in a multiple fatality dust storm accident two years ago when a seemingly-benign, outflow caused instant zero visibility. I was fortunate enough to know how to handle the situation and survive while others did not.
Reactions: Timothy Schaffer and Tarmo Tanilsoo

Colin Davis and I were also on this cell, but we were fortunate enough to find a single-bay concrete car wash at the intersection of US 40 and Main Street in Sharon Springs just as the storm was coming into town. Here's a brief video of what we saw from that vantage point. We were unable to film the initial severe gust because we were getting sandblasted just outside of the car, but we managed to catch the second, more prolonged one:


At this point I'm not sure that it was in fact a downburst that was responsible for the damage some chasers experienced in Sharon Springs and Wallace. NWS Goodland repeatedly made mention of 80+ mph winds in their severe thunderstorm warnings for this storm, and they later found a consistent path of wind damage that stretched from Cheyenne Wells, CO (95 mph gust reported) through Weskan, KS to Sharon Springs (100 mph gust reported). Wouldn't damage from a downburst be much more geographically localized? Regardless, it was a doozy of a storm, and we were lucky to find shelter before it hit.
Reactions: James Wilson and Ethan Schisler
You must log in or register to reply here.
Share:
Facebook Twitter Reddit Email Link
Top Bottom