Seems like no one did any report on this (surprisingly). As for me, I just got around to posting this ... This is my chase log for hurricane Ida in SE Louisiana (Terrebonne Parishes / Houma). Details are below...

Summary: Hurricane Ida was a devastating high-end category 4 hurricane that slammed into southeastern Louisiana on August 29, 2021 - Marking a 16 year anniversary of hurricane Katrina (16 years prior) in 2005 on the same date.

The system intensified into a tropical storm, and eventually a minimal hurricane, while southeast of western Cuba, on August 27. The storm crossed over western Cuba, and re-emerged over the southern Gulf of Mexico.

Once back over water, Ida began rapidly intensifying on August 28, crossing a warm eddy in the Gulf of Mexico "loop" current. This rapid intensification spree continued all the way up until landfall on August 29, where it came ashore near Port Fourchon as a high-end category 4 hurricane, with maximum sustained winds of 150 to 155 MPH.

Sporting a double-eyewall structure, hurricane Ida continued northwest, with only gradual weakening, and devastated the areas near Houma, Raceland, and Golden Meadow (among others). My area in Houma was clipped by the western portion of the eye, and fully exposed to the violent inner eyewall of hurricane Ida.

The storm jogged east as it began weakening, and moved more north - Crossing near Baton Rough during the night of August 29 / 30. Rapidly weakening, hurricane Ida weakened to a tropical storm during August 30, and eventually a tropical depression by August 31 near northwestern Alabama.

After that, Ida continued east and northeast as a remnant / post-tropical low, and across the northeastern USA, and dissipated thereafter. Observations of hurricane Ida were made mainly in Houma, Louisiana, which took a direct hit from th core of this hurricane.

This chase involved flying out of Long Beach, California to Houston, Texas on August 28, and driving east to Lafayette, Louisiana for that night. The following day, August 29, I headed to the mail target area of Houma, Louisiana - Which had a parking garage near the government center for observing the core of the hurricane.

On August 30, I made my way carefally out of Houma, which was devastated by the storm, and back through Lafayette and west into Texas and was back in Houston by the evening. I spent a few days in Houston, mainly working on my IT job there remotely, and flew back to Long Beach, California on September 2. Total mileage was 683 miles.

Hurricane Ida did over 50 billion dollars in damages and at least 115 deaths during its rampage across the Caribbean and southern to northeastern United States. In the NE USA, deadly flooding became the destructive force, not wind, mainly from the extratropical stage / remnants of Ida. 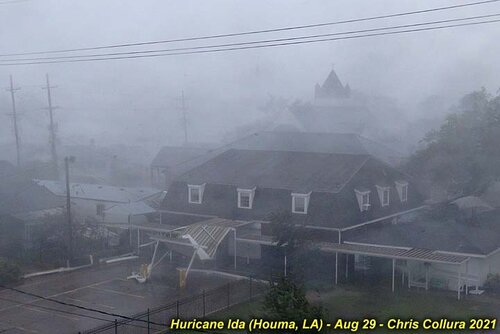 Above: The eyewall conditions of a catastrophic, major hurricane, rears its devastating and ugly head over Houma, Louisiana during the afternoon of August 29, 2021. Ironically this was the 16th anniversary of hurricane Katrina, which devastated eastern Louisiana and Mississippi in 2005. In the picture above, the double eyewall falls across Houma, Louisiana, which took a direct hit from the hurricane core. Even worse, points farther east suffered even stronger winds, which gusted around 170 MPH. The eye of the storm came ashore near Port Fourchan, with sustained winds of 150 MPH, and moved northwestward towards Houma and Raceland several hours later. Louisiana has had very bad luck with these powerful hurricanes in 2020 and 2021. 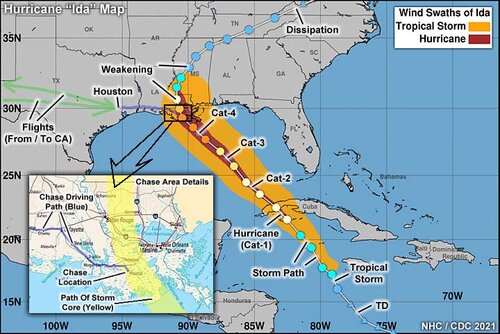 Above: This is a composite graphic using maps from the National Hurricane Center and NOAA as well as a map of the Louisiana coast in the inset image. The NHC map shows the winds swaths of tropical storm and hurricane forced winds, in orange and red, respectively. The track overlay itself is from NOAA and shows the storm intensity (warmer colors representing a strong storm, such as red for category-4 winds, and cooler colors a weaker storm). The chase (driving) paths appear in blue, and flights (going from California to Houston, and back) are in green. In the inset, the chase location was mainly in Houma, Louisiana, with the path of the storm core (inner eyewall and eye) depicted by the yellow swath.

Full video of Hurricane Ida is below... 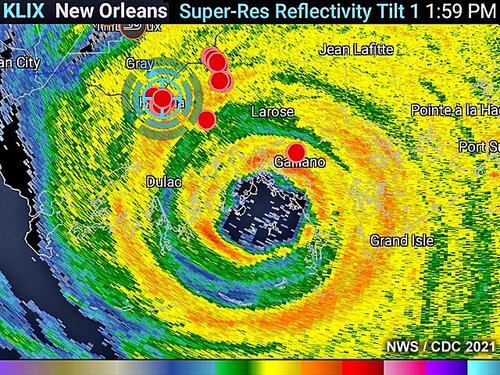 Above: This is a radar image (base reflectivity) from New Orleans from roughly 2 PM CDT as hurricane Ida was moving NW then jogging north near Houma and Raceland, Louisiana on August 29, 2021. The blue cross-hairs are my position in Houma, which was clipped by the western portion of the eye. The red dots are positions of other spotters and storm chasers (from the Spotter Network). Note the impressive double eyewall structure of the hurricane. 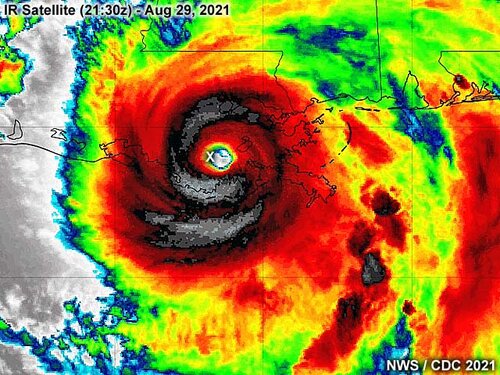 Above: This is an infrared satellite image of hurricane Ida after it came ashore in Louisiana at roughly 21:30z. For several hours, the storm maintained an intense core structure, with symmetrical eye and eyewall, quite possible due to what is called the "brown ocean" effect. This is where the storm does not weaken over land, since coastal Louisiana is mostly marshland and low lying estuaries, and continues to "feed" the storm with warm and moist air, despite it being over land. The cloud tops are extremely cold, lower than -80 degrees C, colder than dry ice, reaching 60,000 feet! The small "X" marks my position in Houma at the time I was chasing this hurricane. 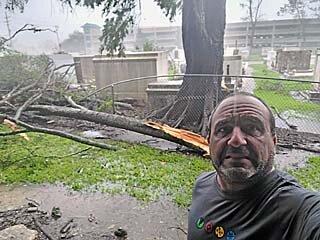 Above: Myself standing next to a fallen tree by the cemetery next to the parking structure late in the afternoon. 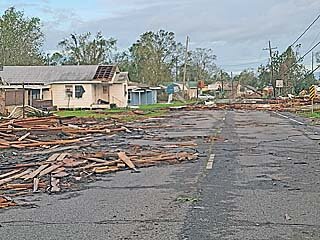 Above: Damage and blocked road in Houma with destroyed homes and residences. Not the water mark too (left side of picture), as the storm surge actually made it this far inland (15 miles)!