5/23/2010 is definitely an underrated tornado day and setup that has not been given the respect that it deserves. In this thread, I will be briefly discussing the overall setup on both large-scale and meso levels leading up to the severe weather; providing photos, witness accounts, archived weather analysis plots/models, radar, etc. I will also discuss why this event and overall setup is very underrated within the storm chasing community.

Before I get into the meteorological synopsis and mesoanalysis of this event, I will discuss the general overview of this specific severe weather outbreak. I will also like to thank Bary Nusz for providing outstanding high-quality documentation of this svr wx event, which inspired me to create this thread! 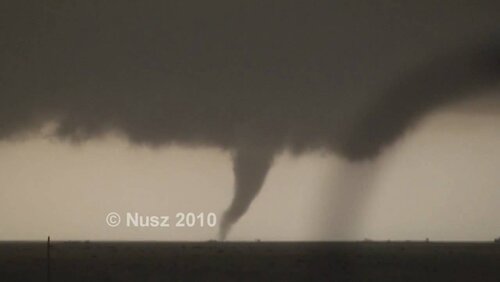 This severe weather outbreak was mainly focused on the western plains of the United-States. Although severe weather covered a large swath of this region, most of the tornadic storms were emphasized on the NW TX panhandle and NE NM border(16 tornado reports). A major aspect of this event encompassed multiple training semi-classic supercells over a small localized area of the TX, OK panhandles and NE New Mexico that ultimately produced many tornados(a couple significant). Most of the tornado tracks went directly between the towns of Clayton, NM, and Texline, TX, in which at some points these towns were saved of a direct hit by just a few miles. Fortunately, many videos/pictures and records exist of this tornado/severe weather event that can be easily accessed and viewed. Despite many confirmed tornado reports via professional storm spotters, damage was mostly limited with no injuries! NOW LET'S GET TO THE GOOD PART!!.


Although the setup of 05/23/2010 was not as impressive as the Bowdle, SD event the prior day, there are many notable meteorological factors that contributed to the localized tornado outbreak. In my synopsis of the 05/23/2010 severe weather event, I will first discuss large scale ingredients and eventually work my way down to the meso/sfc levels that composed this event. 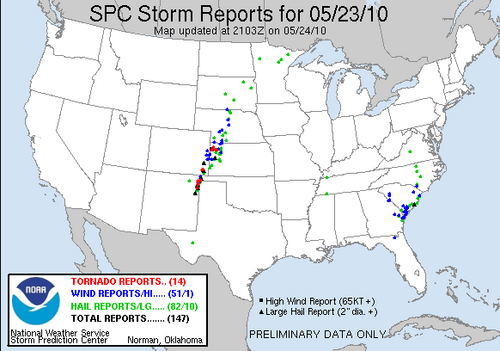 SO FIRST LETS TALK ABOUT THE UPPER LEVELS!
The 2010 spring was noted by consistent troughing in the western U.S. that was responsible for multiple severe weather outbreaks, especially across the S. plains. May 23, 2010, was no exception, with a large mid/upper-level shortwave trough dominating the W. U.S. For a classic TX panhandle severe event, the trough's axis usually is centered on four corners region of the U.S., but this 500mb low was located farther west over S. California and Nevada. The troughs far west position likely contributed to the unusually backed thunderstorm development on the TX/NM border. A small sliver of 50-60knt 500mb flow existed across the tornado outbreak area with a sharp south SW direction that provided the warm sector with ample directional shear. Throughout the day the upper-level trough's orientation became increasingly negative as it slugged closer, which emphasized both vertical velocity and large-scale vorticity in the severe wx area. Just as notable as the impressive trough/vort max, the large ridge to the east was also had a large role by providing seasonably warm and moist conditions into the warm sector. A major limiting factor of this event was the borderline uni-directional shear in conjunction with the lower levels, in which the supercells quickly began to merge and interfere with each other. Also note the large spread of the iso-bars over the svr wx area which contributed to strong upper-level lift.

Similar to the Upper-levels, the meso and sfc levels were also very impressive. On this day, the dryline was a little farther back than expected, which caused the SPC to adapt the slight risk to include NE NM. The thermodynamic environment across the Texas panhandle and New Mexico was substantial and more than enough to support a significant svr wx event. The area was characterized with strong S/SE sfc winds and low to mid 60 dewpoints at the surface in relation to upper 70s to low 80s temperatures that contributed to a highly unstable environment and sfc based storm mode. Reflective of the high temp and dewpoints, the sfc CAPE ranged from 2000-4000. Although the instability was high, the temp/dewpoint spread contributed to high storm bases at first, but it wasn't a problem for very long as the evening progressed. The sfc based lifted index was also notably high with values upwards of -9 based on the ample instability, upper-level influences, and a sharp dryline. A prevalent cap was centered over the area throughout the day, which prevented any storms from forming until eventually eroding from the high temperatures. This cap prevented pre-mature storms from forming and other overcast clouds in which only furthered the instability. A strong low-level 850mb jet existed across the area which in conjunction with the strong 500mb flow contributed to high surface relative helicity values upwards of 400 and ample low-level shear. On satellite, you can clearly see the large clearing area with a prominent cumulus field that eventually grew to become a line of supercells! With all these ingredients together lead to extreme EHI values and supercell composite parameters. 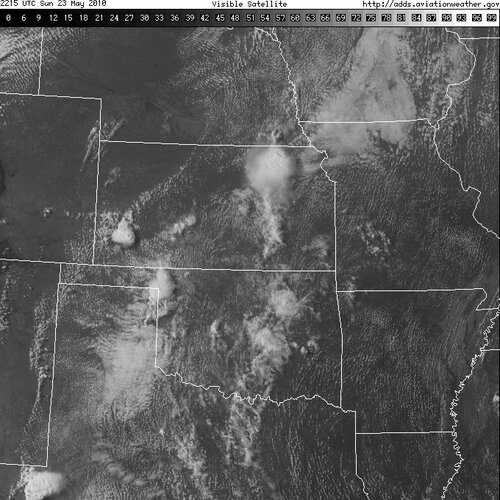 I wish I could provide more pictures and archived weather data, but I'm only limited to 8 pictures


Radar/reports
In the late evening of 5/23/2010, a line of semi-discrete supercells began developing along the TX/NM border; Many supercells trained over the same area for hrs.

Videos
Barry Nusz has exceptional documentation of this event. I highly recommend you check out his youtube channel: links to his Youtube videos below