Be careful of the image your chase vehicle presents

Funny sideline to all this. I had an FBI friend years ago who once told me they used a "storm chaser" disguise for an investigation. He would not give me any details.
Reactions: Mark Blue

Once thing we teach at the academy is situational awareness. Know where you are and what/who is around and routes of escape.

What we cannot teach is common sense.

So when I see the wacker vehicles here and on the road, sometimes you have to wonder what kind of police/fire/EMS/Twister/AAA fantasy and image they are trying to project.

On the emergency services side, in states that allow POV responses (and for that matter those that don’t) we have our share of “over the top” vehicles and we try to internally limit that.

With the Internet/Galls and then eBay of the late 90’s, equipment became more freely available so those who prob shouldn’t have it now have easier access to it.

That being said, we are seeing more unstable people with it and it’s legitimacy of seeing certain vehicles and people is rapidly declining. Remember all the roadside fake cop rapes of the 90’s and early 2000’s? There you go.

There is a new trend we are seeing with all these AAA/Roadside assistance wannbe’s. Kids and adults are lightning up their vehicles with lights and stopping along the roadways to play AAA for disabled vehicles. You can see risk there already.

Even amber lights, behind a clear or colored lens - still projects an image to the general public (for good or for bad intent).

Now, those who want to deck their vehicles out and want to look copish so that people are intimidated to move out of their way - also know that as stated previously - the bad guys who are emboldened today will not be looking at your license plates - stickers or the 99 ham radio saves lives stickers.

they see a crown Vic or other fleet vehicle looking car and will damage and challenge you.

My ride ispersonally owned and used in public safety. I have non-government plates that reflects the fire serivce. Outside of that, it easily looks like a LE low profile vehicle.

When I’m out chasing, I look at where itmay be ending, check the area of town and make apporiate descisions on lodging fuel and food.

Also with credentials I do carry and have appropriate locking devices and/or items removed from the vehicle.

The choice is yours - practice common sense and don’t look and act like a tool - know where you are.

Still waiting for someone to legitly tell me that the 35 traffic arrows on the rear of their Honda Civic made the tornado move around them when the tornado saw the arrow pointing left...
Reactions: Andy Wehrle

No hard feelings, really, but the PJH schtick got old by 2008, 2009 or so. The dead horse has been getting beaten for at least a decade.

If someone has the proper credentials, who cares what they drive, or how it's outfitted? So, they have more warning lights than someone would like? Meh.

If they don't, let the law sort it out.

And let the rule of the jungle sort it out. If someone isn't smart enough to have situational awareness, I've never understood how that's anyone's business other than the people who lack it themselves.

I just don't see having the energy to care so much, for so long.

That’s the beauty of living in a free country. Everyone is different and to each their own. I choose to go low-profile but others might not and that’s fine with me. Those who have been mistaken for LEOs have another feather in their cap that makes for good conversation IMHO. I just go my own way and hope to see others I might know in the field for a chance meeting. It actually unnerves local communities to see ‘chasers’ show up on severe weather days. We’re part of an unmistakable outfit so people are naturally interested in what we do, why we’re there, their near-term personal safety, and are fascinated by our vehicles, equipment, and gear.
Reactions: Todd Lemery and Jeff House

Knock it off. I don’t know who died and appointed you guys the radar police but enough already. We have a long haul until next Spring and I’m not going to spend it listening to people who enjoy attacking others just because they do things differently than you.
Reactions: Marc R. O'Leary

One very well know chaser drove a surplus police car for a few years (he drove something else in 2020 when I say him), and he told me that he did that "so fewer people messed with him". I didn't get to inquire about what he meant. Although in 2020, I have to wonder if being in a surplus police car might cause more people to mess with you. It might depend on where you are at.
Reactions: Mark Blue

I chase incognito. Chances are you have passed by me on a chase before and had no idea who it was, especially pre-2017.

After my baseball-hail-smashing chase near Ada, OK in March 2017, my vehicle may be slightly more recognizable as a chaser vehicle given the extensive hail dents, but still...I don't use markings, and for the very reasons many others have stated. Also, I don't use CB radios or anything like that. I do not see my duty out there to be first response or reporting (nowadays, I never chase an event that doesn't have dozens of others also on it who are more eager to send reports). Should I ever find myself on a chase in which I felt like I was one of the only ones around, I would certainly make an effort to report what I see. However, I have felt those days are long gone, and hence it has eased any pressure on me. I prefer to just enjoy the sky without dealing with crowds or enthusiasts. That said, I certainly am willing to converse with others who are stopped nearby. 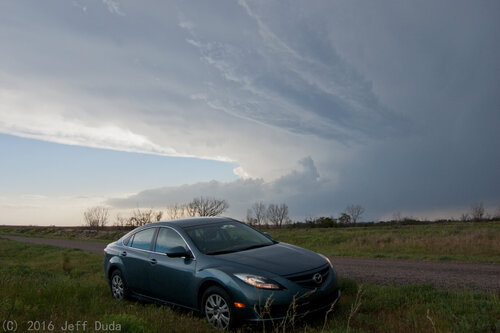 If i see a dented blue Mazda, I'll stop and say hi!

I will likely get away from the "black" vehicle theme and change things up for my next vehicle. I'd love to go hybrid, but nothing right now (mid-size SUV) has the off-road requirements to get the job done (tornado, lightning and hurricane chasing environments with 250+ hp). The 2021 Rav-4 Prime would be great, but it's not an off-road vehicle. I'm looking at the Ford Bronco Sport in Cyber Orange for 2021 if I can come up with the money. I have a big casino heist coming up next week in Vegas with 10 other chasers. 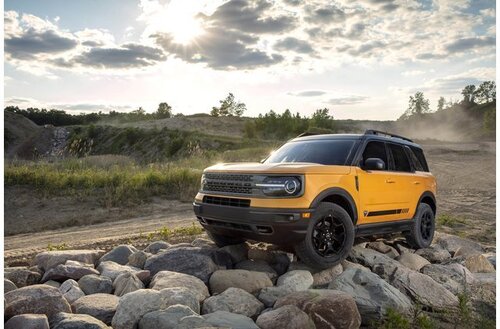 Might still be, depending on availability and dealer markup.

I got a feeling this thread got started because of me. I understand that I looked reckless driving dangerous old POS's across the country. 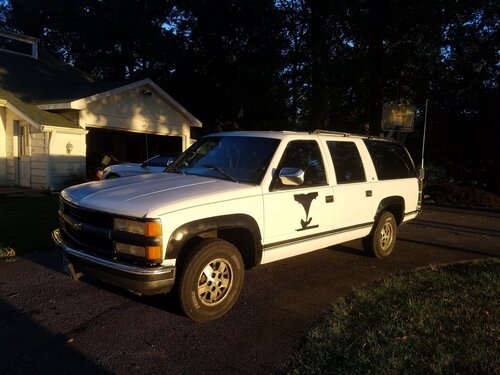 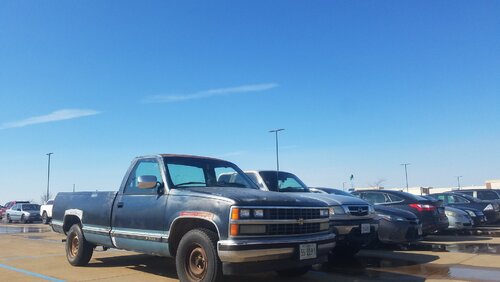 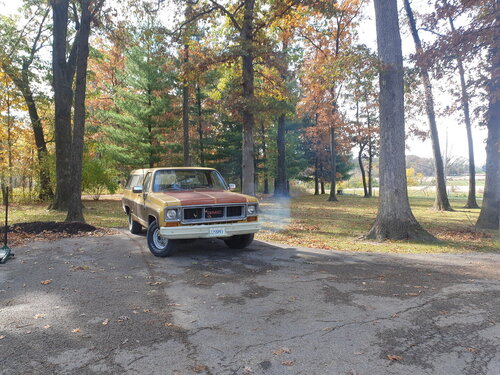 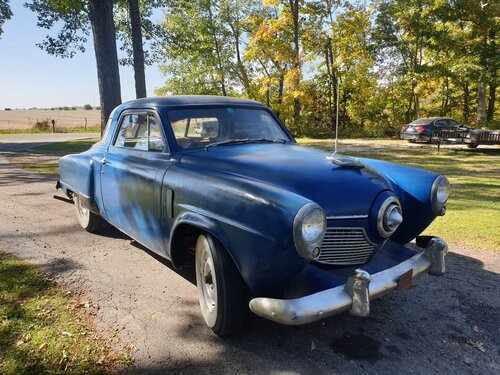 I don't believe so, Jack. It was cautionary, regarding people's attitudes toward law enforcement, and peoples seeming inability to tell what is and isn't a police vehicle anymore.

Then someone who has been railing about police lookalikes on the internet since before you were born chimed in. This wasn't you.
Reactions: Mark Blue

Warren started the thread based on his experience driving a black SUV and being assumed to be a cop, despite it not being a make of vehicle that is purchased by government agencies. In the current environment, that could be an issue, and he wanted people to be aware.

I chased in an old beat up Suburban myself for many years, albeit unmarked, so I don't believe anything in this thread was directed towards you.
Reactions: Mark Blue
You must log in or register to reply here.
Share:
Facebook Twitter Reddit Email Link
Top Bottom