Who needs Twister 2 when we can have a Baldwin?!? The epic disaster movie is the first title from a non-exclusive first look deal between Highland Film Group and Short Porch Pictures.

I haven't been this excited in a while.
Reactions: J West, Verne Carlson and Andy Wehrle

Cool! Perfect that Baldwin is the "bad guy".

I was kinda hoping the next tornado movie might actually be good but I'm still very excited for this cheese.

“...deep into the eye of the most dangerous supercell ever seen”

Is this the one where the tour guide gets too close and the vans flip over??
Reactions: Ken Perrin, Mike Z, J West and 7 others

JamesCaruso said:
Is this the one where the tour guide gets too close and the vans flip over??
Click to expand...

I hope somebody good plays me. (I'm picturing a young Brando.)

JamesCaruso said:
“...deep into the eye of the most dangerous supercell ever seen”

Is this the one where the tour guide gets too close and the vans flip over??
Click to expand...

Exactly. Don't you think that headshot of Alec Baldwin just slightly kinda sorta seems to maybe look like someone related to this???
Reactions: Jason Boggs, JamesCaruso and Todd Lemery

I wonder where in the world they got this idea? They really missed a golden opportunity with a sub plot featuring fake scientists. It will no doubt increase tornado tourism, just like "Into Thin Air" did for Everest adventures.
Reactions: Todd Lemery The film, which will be available to buyers at the virtual Cannes market, stars Baldwin in the eye of the most dangerous storm ever seen: "I haven't been that dirty in quite a while."

Does anyone know where the movie is being shot?

Mike Smith said:
Does anyone know where the movie is being shot?
Click to expand... Sounds like an ultra-low budget film. There's no guarantee it will ever be released theatricality. Making a film is one thing, but the successful distribution is another. Many end up as PPV. These types of films are sometimes released when industry insiders learn of a larger, similar film in the works. (Maybe Twister-2). When I worked with Twister, there were 2-3 other productions being planned by lower budget film-makers. None of those projects were ever produced.
Reactions: Ken Perrin

From Baldwin’s response to an interview question, in the hollywoodreporter.com interview posted above:

“Samaras died in what apparently was some horrible anomaly where two funnels are combining to make a supercell and then you don’t see the other funnel out of corner of your eye.”

JamesCaruso said:
“Samaras died in what apparently was some horrible anomaly where two funnels are combining to make a supercell and then you don’t see the other funnel out of corner of your eye.”
Click to expand...

Pretty good for a Hollywood actor who probably spent a couple days prepping for a week long shoot before he's off to the next thing. As a total non-weather person, he had to try to explain to other non-weather people the documentaries he watched for background info in which quickly developing and merging subvortices (funnels) are moving about the MVMC (supercell).

Not that I have to defend this, and I am super biased. I was invited to appear in the film in a bit part. It was a chance to do something fun and different, and I jumped on it. And indeed it was a blast. I was there for a couple days in Montana this May, and was really impressed with everything I saw. The crew seemed passionate and dedicated to their craft. The actors and production staff were outgoing and put in a ton of effort. Even Baldwin was friendly and engaging with the other chasers that were there, asking questions about Samaras, his work with his Turtle probes, and the El Reno storm.

The gust front of an elevated storm hit the location the first day I was there. I thought it was pretty awesome. But the crew, not so much. The outflow wreaked havoc on the props, rigging, and lights.

Although it's a small budget indie project, the effects are going to be mostly practical while combining real storm footage (ala Hollingshead's shots in Take Shelter I hope). The effects and compositing I got to see looked really good. I hope it translates well to the screen as opposed to other films that drop millions on computer animation only to come off looking cartoony. Even if this turns out more like Tornado! than Twister, there are a bunch of nods to the real world history of storm chasing and meteorology (including Stormtrack), so hopefully the chaser crowd gets a kick a out of it just as Twister has become an endearing classic despite being an over the top (sometimes cheesy) thrill ride. I can't wait to see what they do with the final product.

Me with the director, Jamie Winterstern, and the lead Daniel Diemer: 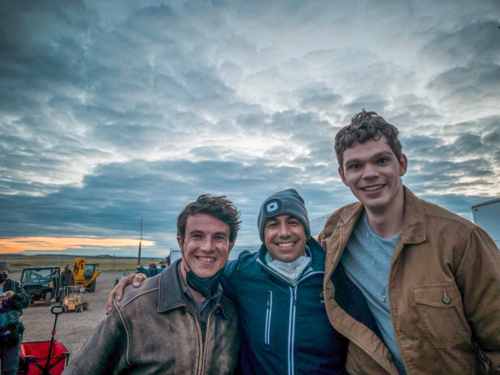 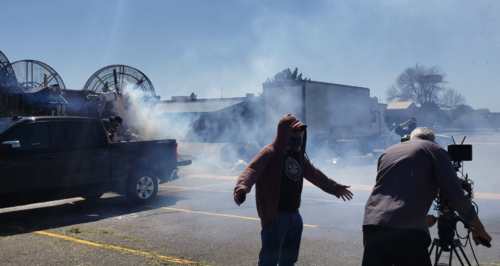 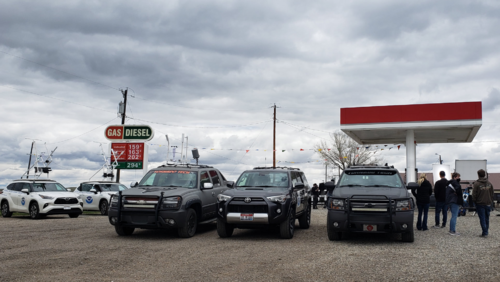 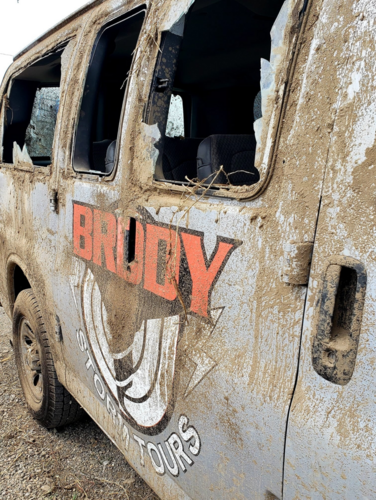