A supercell or not?

This is my first post here. I hope I've chosen the right forum.

In the afternoon of September 18, 2019, a rather powerful hailstorm hit the town of Volgodonsk, Rostov oblast, Russia. Spiky hailstones measuring up to 3-4 cm in diameter were reported. 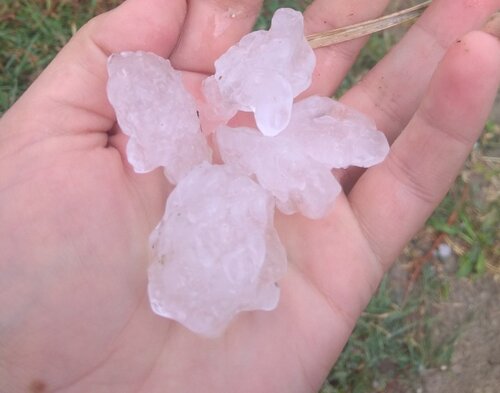 ​
I'd like to know if the storm was supercellular or not. Unfortunately, no radar data or photos are available. The only source of data is satellite imagery. It shows a long-lived convective process deviating slightly to the right of the mean flow. The development of new cells on the storm's trailing side is more discrete rather than continuous, suggesting a multicell structure.

This is the satellite imagery of the storm at the time it hit Volgodonsk: Satellit HD-Bild vom 18.09.2019, 14:45 Uhr - Rostow am Don. "Animation" in 5-min increments can be done manually by clicking at "back" and "forward" time navigation buttons.

Local self-taught weather experts insist that it was a "pulsing" LP supercell. I've never encountered "pulsing LP supercells" in the literature, and I'm perfectly aware that it's often hard to identify a supercell only by looking at satellite and photos of hailstones. However, what are the chances that it really was a supercell? Thanks in advance for your answers.

I'm sorry for my bad English.

Do you have any idea of whether there was a path along which the hail was noted? As supercells, by definition, have a persistent mesocyclone, they often result in hail swathes (or, a somewhat longer duration hailstorm if the storm is stationary). In my experience, hail >3-4cms tends to be associated with organised thunderstorms, either powerful multicells, but quite often, supercells.

In the end, without radar information it's very hard to say...or, at least, some kind of visuals of the storm from ground level.
Reactions: Todd Lemery

Paul Knightley said:
Do you have any idea of whether there was a path along which the hail was noted?
Click to expand...

I've finally analyzed radar imagery of this storm. Unfortunately, the resolution is very low - only 4 km/pixel. The Russian hail detection algorithm (based on maximum reflectivity in vertical column and the height of >45 dBZ echo above 0 deg C isotherm) identifies a continuous 120-130 km hail path with hailstone diameters exceeding 2 cm. The hailstorm moved with very high speeds of 80-90 km/h, so the large hail phase persisted for about 1,5 hours.

1 km AGL reflectivity persisted in the range of 55-60 dBZ for these 1,5 hours, and even peaked above 60 dBZ for a half an hour.

Based solely on these, I'd lean towards a supercell, but the development mode seen on satellite is discrete.
Perhaps it could be a "weak evolution" hailstorm, where feeding updraft towers are not as discrete as they are in the organized multicell storms, but the propagation is still not quasi-steady as in supercells.

A few words about the environment. The hailstorm occurred before the passage of a cold front. CAPE was low - around 600-800 J/kg and 8 km EL. The shear was unidirectional, but very strong by local standards - 20-25 m/s in 0-4 km layer, 30 m/s in 0-6 km layer. BRN was around or slightly lower than 10, suggesting shear-dominated conditions.

I've attached a GFS forecast skew-t. The parcel's mixing ratio should be 10 g/kg, not 8 g/kg as calculated by the GFS. 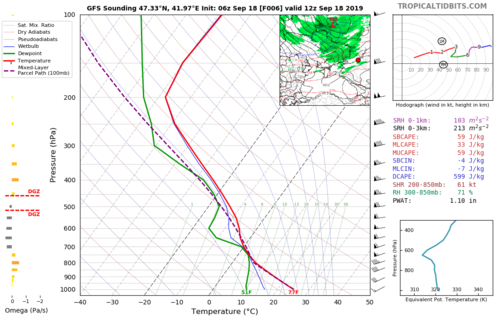 That forecast sounding shows more than enough shear for supercells. Also, if the storm had observed deviant motion from the large-scale mean flow, that implies that internal storm dynamics typical of supercells was at play (although that is not the only reason that storms can have deviant motion, but if the storm was a discrete cell rather than linear in morphology, that almost completely closes the door on alternate theories). Combine all that with your other description of reflectivity evolution and the odds are probably something like

Jeff Duda said:
That forecast sounding shows more than enough shear for supercells. Also, if the storm had observed deviant motion from the large-scale mean flow, that implies that internal storm dynamics typical of supercells was at play (although that is not the only reason that storms can have deviant motion, but if the storm was a discrete cell rather than linear in morphology, that almost completely closes the door on alternate theories).
Click to expand...

Jeff, thank you for the answer. I wouldn't have had much doubt about the supercellular character of this storm if I hadn't seen satellite imagery. It's satellite that shows discrete development of new cells, as 4 km radar resolution is not enough to capture the details. The anvil is reformed several (3-4) times, with cold top remnants being blown away by the jet stream and new anvils forming upshear. I've never seen a supercell to behave like this.

What is the location and time frame of the actual hail event? The satellite loop covers a huge time interval and doesn't give much information at all. Discrete anvil is not equivalent to discrete cells. Many cells in a complex will contribute to the same high-level cloud shield observed on satellite. Extreme unidirectional shear will typically support wide ranging mix of storm modes... multicell, supercell, and linear... so likely there are many different storms with different propagation modes occurring at different times and locations, not all producing large hail or severe weather. It's not possible to distinguish between modes based on low-res satellite imagery. Multicell pulses will not necessarily be distinguishable at all.
Last edited: Nov 7, 2019

Finally I have some spare time to analyze the event one more time.

A short description of the radar product presented below: it is called "weather phenomena" and is based on the vertical distribution of reflectivity. Green corresponds to stratiform precipitation, blue means showery precipitation, red means thunderstorms and brown stands for hail. The darker the color, the stronger the phenomena. The darkest brown shade means 2+ cm hail which is identified when max. column reflectivity is > 65 dBz, and a number of secondary reflectivity-echo top height criteria are met.

Unfortunately, the resolution of the radar is only 4 km.


On the radar snapshot below, Volgodonsk (or "Wolgodonsk" as it is named on the map) is hit by the hailstorm. 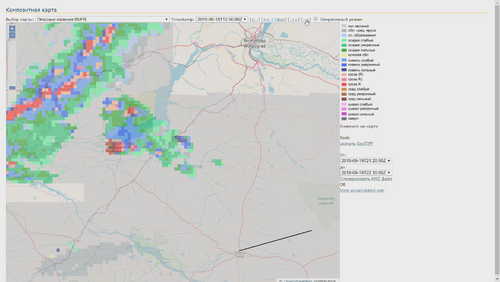 A HRV satellite loop might tell more details than the coarse IR. 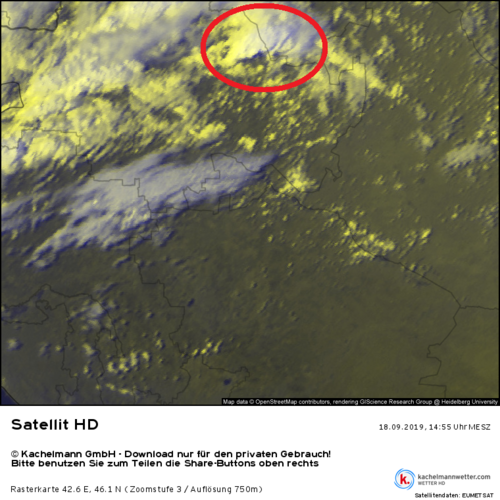 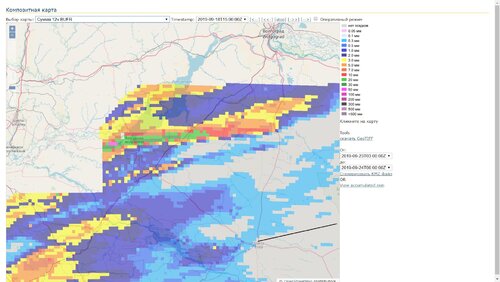 It's interesting that 10-20 minutes after the storm hit Volgodonsk, the old hail core seemed to move to the rear of the storm and die, and a new core formed immediately to the SE of the old one. This process happened at least one time again later. Slight "jumps" of the max. radar rainfall accumulations support this conclusion.