The contest period is now over. Several months of the period have been entered into NCEI's Storm Events Database, so the official results are in through August as of now. I had previously reported an update on this that, regrettably, contained a substantial error that impacts the winning total. After correcting that data, I now post the official results below. 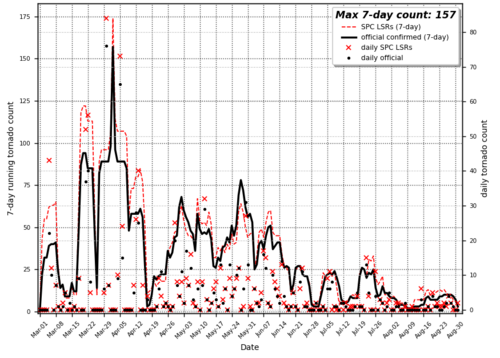 There were a handful of outbreaks in the fall, including an active time in December in which at least 90 preliminary reports of tornadoes occurred within a 7-day period. In December 2021 there were a few outbreaks in which the final totals ended up exceeding the initial reported totals, so there is an outside chance that a similar occurrence here could result in a competitive number to that March total. However, it's only an outside chance, and I suspect the 157 value will end up being the winning total. @Rob Herman, you're currently 1 away from that (wow, what a guess!), and you have a small amount of buffer room, so your odds of winning are looking promising.

Again, my apologies for the significant error in my previous message that likely gave some people false hope. I was pretty unhappy with myself when I discovered how off I was on my initial count. I can provide spreadsheets of the errant days to show the counts if anyone wants to see them.
Reactions: Greg McLaughlin, adlyons and Mark Gressman Jr
You must log in or register to reply here.
Share:
Facebook Twitter Reddit Email Link
Top Bottom