Decided to bite on yesterday's local setup with it being mid-late September and being fairly inactive lately. Had been watching Sunday for a couple days, but was a bit shocked when I woke up yesterday morning to see a 10 hatched right over me. Liked the amount of instability that was being shown for Mid-September along with the forecast low level jet around 00z that would yield 200-400 m2/s2 of SRH values. I did not like the fact that after dark there was a capping inversion that would be moving in and we would also be facing the possibility of some truly significant hail (even used the word "Giant Hail" in the discussion which is quite rare for this area). Other than the fact it would likely be a largely sunset and after show, we (Jesse Risley and I) decided to go ahead and bite.

We left around 4pm for Keokuk, IA where we sat for a while watching things, wondering if it was going to be a bust. Storms started firing to the west near Bloomfield, Iowa. The storm initially struggled quite a bit, but was able to gain a mid-level mesocyclone and went tornado warned shortly after our arrival W of Milton, IA. Fairly nice structured supercell for SE Iowa right at sunset: 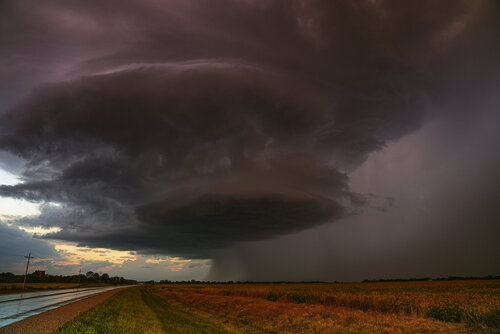 The storm had a nice wall cloud prior to this, however the flow near the storm was very weak which I believe led to this storm not really being able to get its act together. Over the next hour, it pretty much fell apart. We plotted a course back to Keokuk to catch additional supercells that were now firing to the WNW of us and moving ESE, grabbing some relatively cheaper gas on the Iowa side before crossing the river back into IL and dropping south. Initially was targeting a tornado warned supercell near Memphis, Missouri that was moving toward Canton....however we quickly turned back north and changed course once getting south of Lima, IL and seeing a nearby supercell rapidly gain intensity and a circulation on radar. Around 9:45pm the storm gained a tornado warning and we had visual of a funnel cloud that was 1/2-3/4 way to the ground before becoming rainwrapped by severe RFD. The structure here was quite nice as well near Tioga, IL or west of West Point in Hancock County. 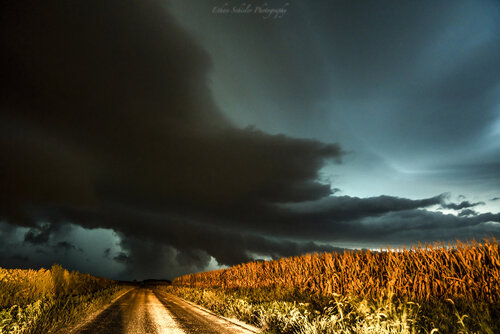 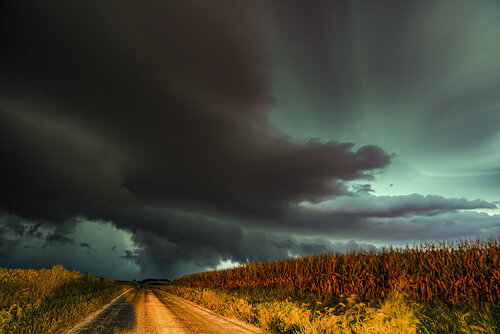 The storm had gained a tornado warning right after I took this screen grab. We followed it E on the main blacktop that goes into West Point, IL noting a 50-100 yard wide swath of moderate tree damage (trees that were snapped off and blown into the road) among other tree damage in the area. Given this and the subsequent strengthening of the circulation on radar as it moved ESE along the road with us, we believe that there was likely a rainwrapped tornado ongoing in Southern Hancock perhaps into Northern Adams County.

After this, we broke off and headed for home. I had several hours of training storms, occasional severe warnings through the overnight until around 3:15AM. Very unusual and long night for this area in September. I've got quite a few more photos to edit, but it has been a busy weekend with photographing weddings and a storm chase. All in all we drove less than 2 hours from home and only spent about ~40 dollars total in fuel, so can't complain at all; and were given 2 nicely structured supercell thunderstorms including one around 35 minutes from home. Hasn't been a bad year for local chases.
Reactions: Saul Trabal, James@LAS, Mark Gressman Jr and 8 others
You must log in or register to reply here.
Share:
Facebook Twitter Reddit Email Link
Top Bottom