I just had to share this given its uniqueness! I recently returned to Idaho from my Plains chasecation, and yesterday there was a marginal risk up here for hail & wind. I figured they would be junky looking storms, and CAMs showed widely scattered storms all across the area, so there wasn't much use in picking a specific target, so I just stayed at home and kept an eye on the radar with plans to go after anything good nearby. Mid-afternoon there was a storm to my west that was building and on the verge of being severe, so I set out to it. It did get a severe warning, and it was decent looking, but died shortly after I got to it. I was already satisfied enough with that, but after that round went through, the skies cleared, and it warmed up. New storms formed to the west, and one looked particularly good, so I went back out. As I approached, I couldn't believe the kind of structure I was seeing! This looked like something out on the Plains!

Here in the Magic Valley area, it's actually fantastic terrain to chase, and in some parts there is a grid road network of PAVED roads! But in this case, I went right up to the eastern edge of Box Canyon and watched the storm approach. It developed some nice structure, even including a scuddy lowering/wall cloud, but this was all outflow, moving right to left. I wanted to see what kind of hail this thing had, so I got into position for the core to go right over me. Actually got some decent stones, at least 1.25" on the biggest ones I saw, perhaps even up to 1.5" but I couldn't grab any to measure, and they melted pretty quickly after falling. For a 30 minute drive from home in freakin IDAHO, I'll take it! Check out the structure! 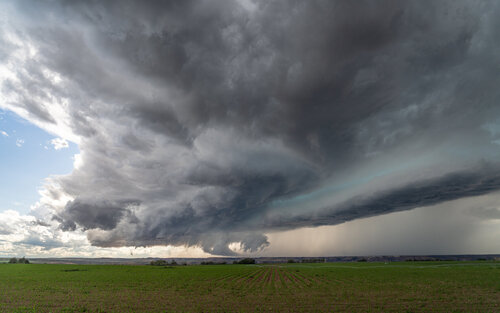