Began the day in Clinton, OK, with the previous night's convection continuing through the morning. Today would be a similar setup to the day before, with the stationary front still in place, although the air mass in OK had been completely worked over. Initial target was Denver City, TX. I figured we might have to go into NM, but I didn't think we could get there on time. I was hoping that if storms initiated there, we could intercept them once they came over the border into TX, without missing anything... My target area was generally corroborated by the SPC MSD that was issued, and the morning RAP model had done well pinpointing the max SBCAPE bullseye. However, it appeared we did need to get into NM. So we set a course for Hobbs and there were already a few storms going up as we approached the state line.

By the time we got to Hobbs, there was a splitting storm. The left split looked like it was going to merge with another, more-northern storm. There were three storms total, stretching from Buckeye NM to southwest of Eunice. There was another storm on the TX side of the border, north of Frankel City. We chose the southern storm, which I think was the original right split. We blasted south on Route 18 from Hobbs to Jal, hoping we would beat the hail core before it came over the road. On the way, we saw nice updraft structure on the middle storm. 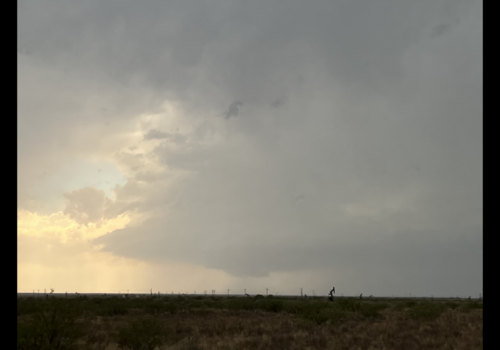 We probably could have intercepted this storm from the westbound road out of Eunice, but it looked like the southern cell was going to kill it off or that they would merge, so we stuck with the southern storm.

At Jal, we wanted to turn west on Route 128 to intercept the southern storm, but saw that on that same road coming back east there was a huge traffic jam, heading eastbound into Jal at the stop sign for the one major intersection in Jal (routes 18 and 128). 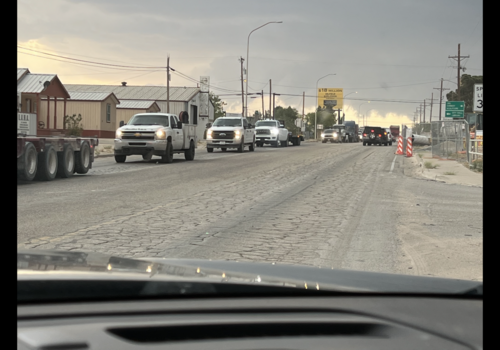 Knowing that if we went west, we would have to come back east and would at best fall behind the storm, at worst get run over by the hail core, we went back a little ways north on 18, just enough to get past the divider, make a u-turn, and be able to park on the southbound side to watch the updraft. It had a large, very low-hanging wall cloud, and I thought (hoped?) this one might have a chance. 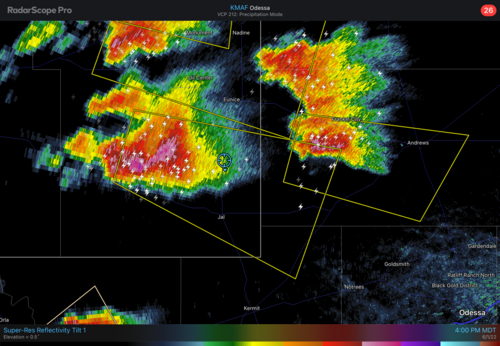 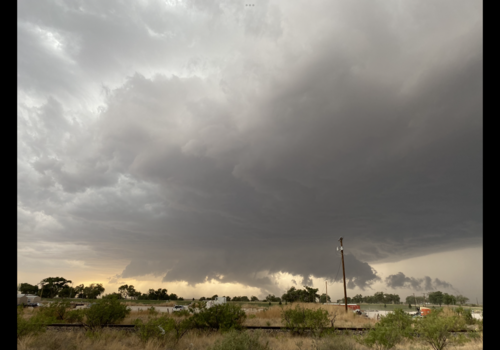 As the storm neared, we had to move east. Storms quickly started merging/congealing, turning into a big mess with a huge hail core. Our storm was clearly outflow dominant by now. 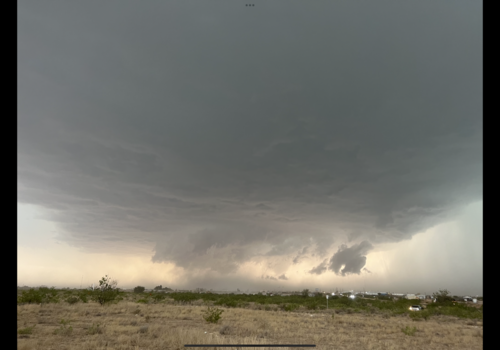 We continued east with thoughts of intercepting the TX storm that was then just SW of Andrews. There was a road heading NE in that direction, but the storm was moving SE. There were no other road options to get S or SE of this storm. We sat on the western edge of the Andrews storm (it was actually SW of Andrews, south of Frankel City, and north of Notrees), experiencing very strong winds, "car wash-like" rain, and some small hail. This storm had an enormous core of large hail, shown on reflectivity in a rarely-seen dark shade of purple, and over a very large area. 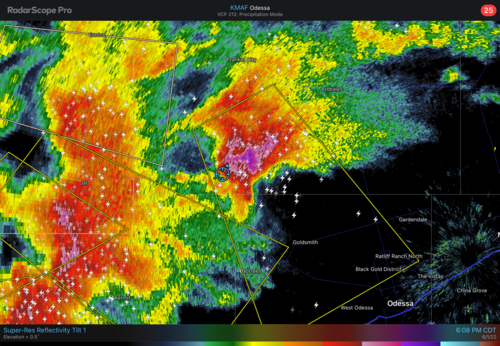 Once the car wash rain and wind abated and we tried to move forward, there was (another) huge traffic jam because of a several-inch-deep hail accumulation up ahead on the road, which also produced a hail fog. (SPC storm reports included one from Andrews County indicating "accumulated hail piles several inches deep covering road, largest stones up to golf ball size"; another indicated 2.00" stones). 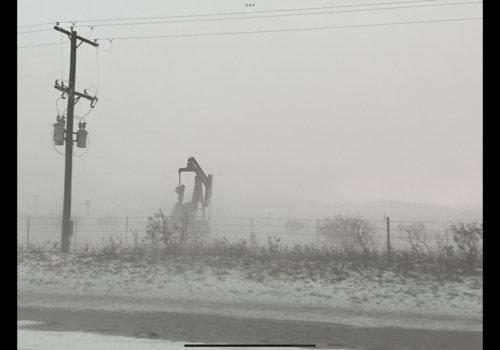 At this point, with the traffic standstill, the storms we had left to the west were catching up to us, and everything was merging into a huge cluster. The chase was over, as there was no way to get south of the Andrews storm, and it was no longer organized anyway - just a big mess. So we bailed north, ending the chase, and beginning a two-hour drive to Lubbock. At one point we stopped outside the car to admire the storms now to our east, the lightning, the huge anvil spreading out, and the sun setting below that to the west...

The Jal storm was actually one of the better supercells we had seen so far on this trip, with the exception of Morton on May 23, although that was mostly obscured by dust. This was certainly better than anything we had seen in Kansas on the "alleged big day" of May 30. It was also another great day for my son's first storm chase vacation, providing his first opportunity to directly experience such strong outflow winds, "car wash rain" reducing visibility to near zero, hail accumulation and hail fog. In fact, it had been a number of years since I myself had occasion to see a hail accumulation or hail fog.

In Lubbock, we found another really cool place to eat, called Cook's Garage - a large bar/restaurant - car-themed, with all old cars, old neon signs, etc. Really cool place, multiple seating areas, just wish it was more crowded, that would have made it more lively... It felt weird to be sitting in such a cavernous bar area that was mostly empty. But it was after 9:00 on a Wednesday night after all...
Reactions: Michael Towers
You must log in or register to reply here.
Share:
Facebook Twitter Reddit Email Link
Top Bottom