With all the attention on Monday, I still think tomorrow is shaping up to be a solid chase day. High CAPE values (4000+) will overspread eastern NE, with dewpoints reaching mid-60's to 70+ in far southeast NE. A slot of HOT dry air pushes into the dryline in south-central NE. I usually like these bulges for storm initiation, in this case somewhere near Grand Island. Tdd could be an issue, with air temps reaching 90, so at least initially storms may be high-based. Nonetheless, high CAPE and 50+ knots 0-6km shear should support supercells with gorilla hail, and perhaps a tornado as air temps cool a bit in the evening. Storm motions aren't as bad as Monday, but still fairly quick at about 35 knots.
Reactions: Bobby Little and Todd Lemery

Christian S said:
Thoughts on my target area being Hastings, NE tomorrow? Hope to arrive by noonish and follow storms from there
Click to expand...

That sounds like a decent place to look at based on what I’m seeing this evening. We are going to target SE Nebraska and play somewhere near the surface low to hopefully catch something busting through the cap.
Reactions: Christian S

Wes Carter said:
That sounds like a decent place to look at based on what I’m seeing this evening. We are going to target SE Nebraska and play somewhere near the surface low to hopefully catch something busting through the cap.
Click to expand...

Awesome, might end up meeting with you! Definitely playing it more south since I’m over in Denver and hoping to hit Kansas Monday if things play out

We are in KCMO Saturday night. Will move toward Sioux Falls on Sunday. Believe the cap is too strong in eastern Nebraska. Will defer upslope West to those more versed in it.

Saturday night thunderstorms in eastern SD and northern Iowa will deposit an outflow boundary there, regardless of synoptic WF which stays farther north. We favor outflow intersection with synoptic stationary front. That’s around Sioux Falls, perhaps southwest of there.

Regardless of outcome Sunday, it’ll leave us in a good position for Monday. Again Sunday (from KC) looks like an I-29 speciaL. Depending on outflow could be far northeast Neb. More likely southeast SD.

Currently in Valentine, NE following yesterday's chase, and planning to play the stationary front in northeast NE. Cap is a concern, but HRRR has been consistent in breaking out one or two isolated supercells along the front around 00z. Short window before dark, but if it goes, it should be explosive development. Good luck and stay safe everyone!
Reactions: Jeff House

EDIT: And now a single isolated cell is back on the 15z

Surprised 16:30 SPC has a 10% tornado risk covering areas that currently have NW winds… 15z RAP does not show winds backing in that area later either…
Reactions: Andy Wehrle and Robert S. Thompson

Enough CAMs have supercells that I'm excited but also nervous given the differences in where they develop. Leaning toward Salem or Yankton while constantly checking satellite and surface obs to see where boundaries are. Concerned about the strong capping in NE.

JamesCaruso said:
That seems to have disappeared on the 12z, 13z and 14z runs valid for 0z…

EDIT: And now a single isolated cell is back on the 15z

It was consistent for a while, but since this morning has been wildly inconsistent. I think it's boom or bust today.
Reactions: JamesCaruso and Todd Lemery

Yeah…..bust. The cap wins again. The second time this year I got beat by the cap. Tomorrow that won’t be a problem.…..
Reactions: Jeff House and Bobby Little

Man it was so close so many times but we did get something from this day. 5 plus inch hail for us though I heard there may have been 7". Either way it was nice to have SOMETHING this day. 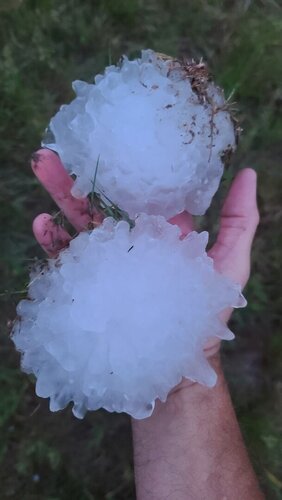 Started the day in North Platte and set a somewhat vague target of Norfolk, Nebraska. Passed through Broken Bow specifically to eat at the Kincaider brewpub, which is awesome and in the middle of nowhere on a dirt road. Couldn't believe I had the opportunity to take my son to yet another of my favorite spots on his first chase vacation!

One of the themes of Storm Chase 2022 was high gas prices, and today was the first time I broke $100. Admittedly, our rented Chevy Suburban had a large tank that was close to empty, but still an unfortunate milestone... 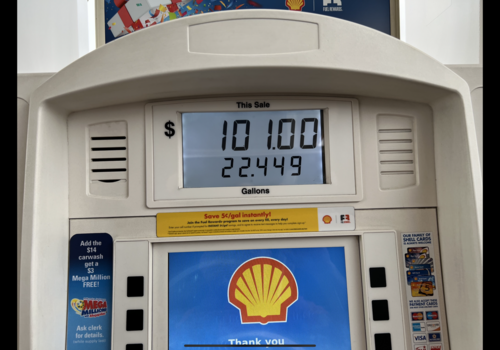 Once in Norfolk, I communicated with a chaser friend from my local area (Philadelphia) and learned there was a large chaser convergence in Osmond, about 30 miles to the NNW. I started backtracking west from Norfolk, because I thought I was too far east of the front. But somewhere west of Pierce, I felt a north wind, so I went back east again to Pierce, where my friend and I made plans to meet.

By this time, it was already after 7pm, it had been cloudy all day, but SPC held to the severe threat and put up a tornado watch - I think this was actually our first tornado watch since arriving on the Plains over a week ago, on Saturday, May 21. We were in the northeast quadrant of the watch box, and some storms finally started going up in the southwest quadrant, all the way back near Broken Bow, where we had been hours earlier! Given the time, we knew this would be the only play before dark. It took all of our remaining daylight to catch up to the storm, after a two and a half hour drive... Due to the poor road network, we could not continue going west, without dropping more south than we had to and then going west again.

The silhouetted supercell and back sheared anvil provided nice visuals as we approached in the waning light. 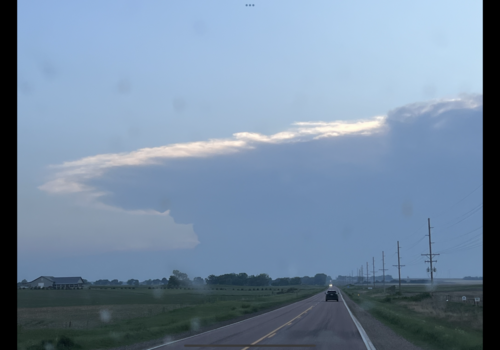 At Burwell, we turned north. The storm had a TOR warning at this point. 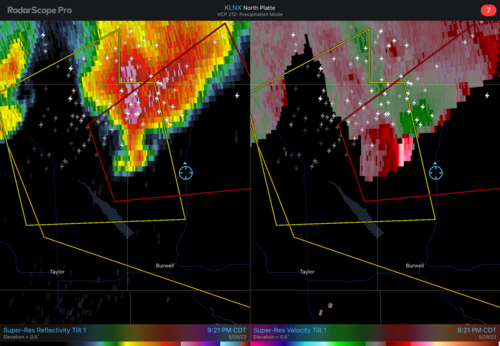 The base came into view briefly, right before dark, about 9:15 CDT. Lots of chasers were along this road heading north from Burwell. It was hilly and hard to find a good vantage point. There was very little light. As a result, we never saw much of any defined structure... There may have been some laminar nature to the updraft base, but by this point it looked kind of stretched out.

Unfortunately, we had to drive all the way down to Hastings; I had already booked a room there, fearing it would be hard to find rooms with chasers and Memorial Day weekend travelers. It was midnight when we pulled in, so there would be no dinner tonight... Long day!
Reactions: Michael Towers, GPhillips and Mark Gressman Jr
You must log in or register to reply here.
Share:
Facebook Twitter Reddit Email Link
Top Bottom