I left Kansas City at 9am with a initial target of Holstein Iowa. I ended up going to Ida Grove watching a cell to my SE blow up (photo below) and headed east to get under it. I went to just east of Palmer and watched the large wall cloud develop and the first large tornado (Photos Below). I caught a glimpse of the second tornado (Photo below) but it was on the way back up when I got a photo of it. As I got close to Fort Dodge I stopped and had circulation on the ground behind us though I think it was just the gust front. I continued to the NE and east of Belmond somewhere I saw another possible tornado though I cannot confirm that one as I was just too far away. I called it a chase and headed to Fort Dodge for Dinner.

The next day I went and looked at the damage from the main EF-2 tornado. A lot of photos of the damage can be seen on my FB (nmjameswilson). An 80 & 82 year old couple took shelter in the basement as it hit their house. They said they never had a tornado hit before and never thought they would at their age. They have insurance and will rebuild and thanked the neighbors that were already helping with recovery and clean up.

I have added links to my handheld video and dash cam below as well. 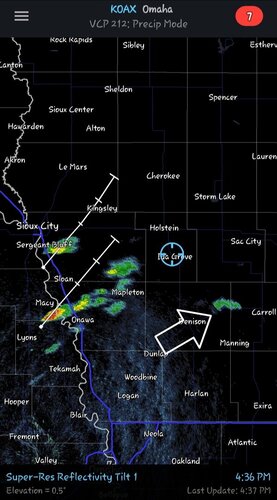 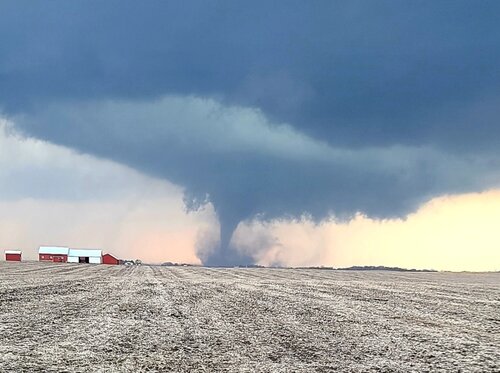 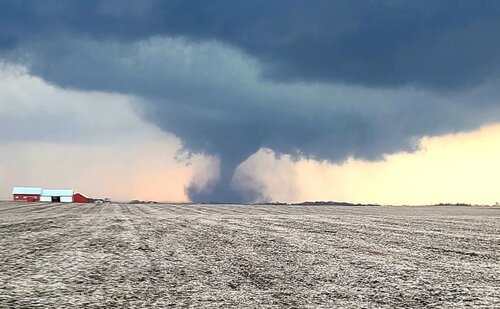 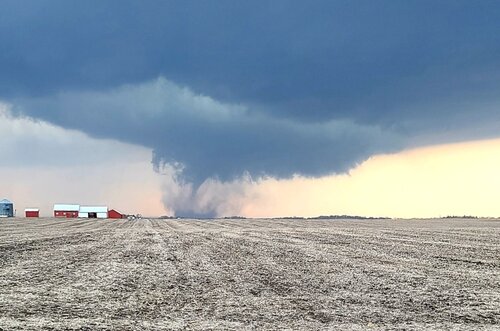 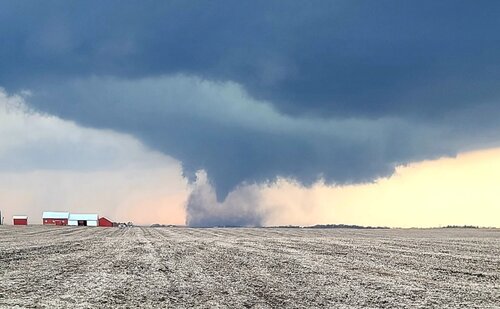 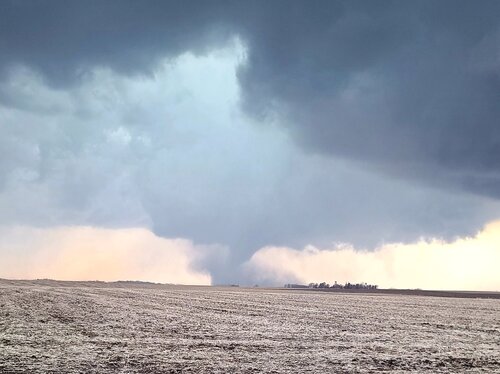 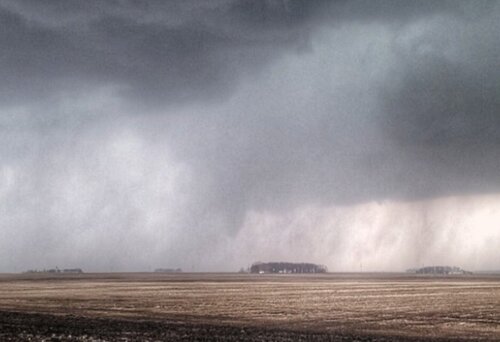 We targeted Ft. Dodge in Iowa. Caught up with this tornado NW of Ft. Dodge near Gilmore City. Saw some houses damaged. Looks like Iowa is the new hotbed for tornadoes. 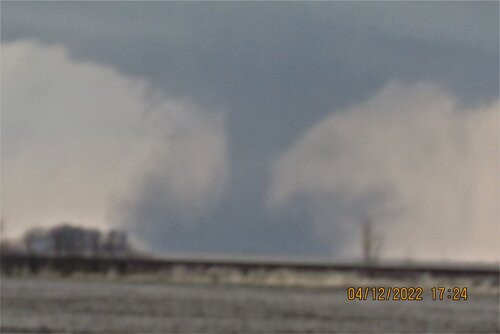 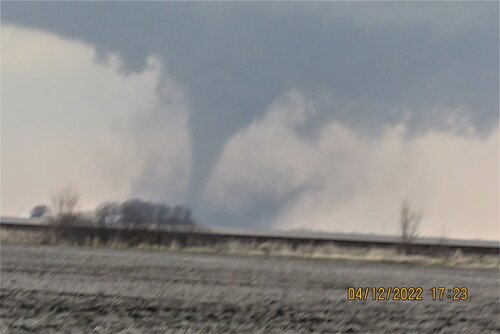 I left from work at 2:00 with a target of Fort Dodge around 5:00. On the way down I decided to get more west with a new target of Emmetsburg and get south from there. On the way the cap broke west of Fort Dodge and my new plan was to intercept the developing storms near Pocahontas. The storms struggled for a while but eventually the southern storm got its act together and developed a strong couplet just a few miles to my south. I got into position right where the tornado would eventually develop. I watched the wall cloud for a couple minutes but nothing looked imminent. Got east a few miles to keep my position out ahead of the wall cloud. As I was in the process of getting east the storm ramped up and it dropped the tornado. I didn't see it the minute it touched down but I was able to see it on the ground in my side mirror. I found a place to stop on highway 49 straight south of Gilmore City and got to watch the tornado go from a dusty bowl tornado to a large cone tornado. After watching it for a few minutes I moved north on highway 19 toward Gilmore City and followed the tornado until it roped out in the rain west of Gilmore City. I was in great position to stay on the storm but I was on the west side of the new meso/RFD. Despite only being a mile or two from the new tornado, I decided against punching the new RFD. Based on the hail and winds in the RFD, I think I made the right call even though it basically ended my chase because it put me too far behind the storm to be able to catch up. I also got stuck with a bunch of other chasers on highway 3 east of Gilmore City due to downed trees blocking the road. I tried to catch up after that but it was useless and the storm had become a big HP mess anyway. Some of the pics I took including the wall cloud before the tornado formed. I should thank @Andrew Butler for nowcasting for me on my way down.

Video of the tornado. Unfortunately my video camera wasn't working right so I had to resort to my cell phone.

Was able to capture the tornado near Gilmore City. Was slightly out of position to the north when it put down; was letting the cells drift my way, waiting for one to take off -- the southern end got its act together really quick and sort of stayed in place for a while. Was able to rush south and get a piece of it. (took a bit of hail however, ended up with cracked windshield after a few sporadic tennis balls struck)

The photos here were take on highway 3.

Derek Weston said:
Was able to capture the tornado near Gilmore City. Was slightly out of position to the north when it put down; was letting the cells drift my way, waiting for one to take off -- the southern end got its act together really quick and sort of stayed in place for a while. Was able to rush south and get a piece of it. (took a bit of hail however, ended up with cracked windshield after a few sporadic tennis balls struck)

The photos here were take on highway 3.
Click to expand...

Arrrrgh. The bolded is exactly what burned me, with all the talk of fast storm speeds expected for the day. I was in Fort Dodge when the first severe thunderstorm warning went out. I drove to Humboldt and then stayed put on 3 just east of the town expecting the storm to (A) take a little longer to really get cranking and (B) Waiting for it to come to me, not wanting to get cut off by traffic by having to go back through the town as the storm should race off passing the town to the north and west, putting me in great position to get a view of the base and keep up with it. By the time I realized what was happening, it was too late to get to where the action was. Storm speeds as reported in the NWS warning statements were really confusing, varying from the expected 50-60 MPH all the way down to 30! I was actually able to get and stay ahead of the storm on 3, despite passing through a couple of towns and missing my turn back to eastbound 3 from the concurrent jog onto northbound US-69 and having to backtrack. But at this point it didn't matter, as the storm had become an HP mess which it would remain for the remaining daylight.

The chase got a little hairy as I raced up I-35 to US-18 east at Mason City with the forward flank core likely containing very large hail encroaching on the highway to my north and the "business end" of the supercell (with rear-flank core/RFD and recently reported tornado north of Belmond/west of Thornton - although as of now DMX hasn't confirmed anything with that) to my west. I got a lightning-lit glimpse of what appeared to be a large wall cloud with a long "beaver tail" extending toward the forward flank core, see attached frame grabs from cell phone video. I may or may not have let out a Dusty from Twister style "WOOOOOOO-HOOOOOOOO!!!!!" alone in my car, out of relief as I finally made it to the ramp and floored the gas.

I took 18 all the way home, with the supercell an increasing distance (10s of miles) to my northwest based on radar, but there still seemed to be lightning all around me. The Riceville tornado apparently occurred just after I got out of Charles City radio range, and by the time I got home shortly after 12:30 AM, the supercell was gone and all warnings on the MCS dropped.

Add yet another to my career of frustrating "close but no steak dinner" chases. At least I got to see a good storm this time. My leaving the house decision was a "HRRR verifies or bust" chase and I couldn't ingore its consistency despite some people pointing out it was an outlier among the CAMs with that NC Iowa warm front rider. Although, for some reason it did struggle with a lack of initiation for the TP/dryline QLCS that followed behind.

Started the day at Fort Dodge, then drifted a little west. Got back into position at Palmer as storm started to wrap up then followed until it became dust wrapped/rain wrapped. 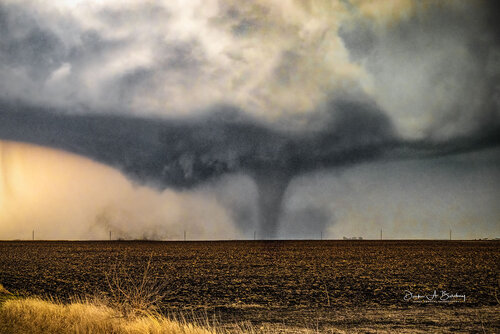 Had quite a drive from Fort Smith AR area chasing Monday's setup and cracking my windshield up to Northern IA. Made it to KC, slept in the car, and was just west of Fort Dodge by the afternoon. Got jumpy when SPC put out the first MD in response to storm initiation off the dryline so started moving in that direction. On my way I noticed almost a total clearing of cloud coverage in that area directly on the warm front. I slowed down and noticed a cell popping up exactly where I was previously. I spent some time trotting north maintaining good position between both areas so I could make a selection once my indecision had passed. once the Palmer IA went severe warned I flipped east and got within a mile just north and east of the wall cloud. Watched the storm do it's thing, and I got the sense a cycle was approaching so I hopped in my car and decided to go a little north and east again to reposition. Intimidating feeling driving north as the interesting area is also moving or about to be moving over that same area. As I took my east road a veil of dirt blasted my vehicle, and the power lines to my right started dancing with the gusts of wind. I imagine I was escaping RFD, but about 60 seconds later I turned around and a large tornado was kicking up dirt right behind me. So not sure if I was in the initial circulation at first? Or if I was being dramatic and it was just a little RFD. Either was it was a fantastic chase day, and I'm feeling more and more confident with my approach. This marks tornado 17 for me, and the first one in Iowa! 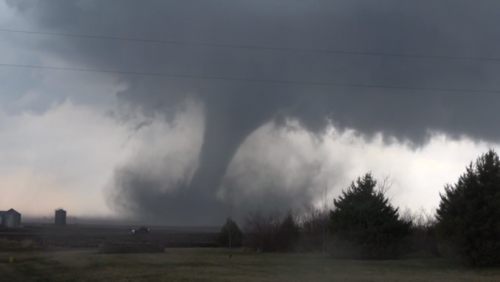 I've posted my chase recap on my website. I chose to head to Texas, but left a bit late and missed the Salado tornado but got the next one. Saw a tornado near the town of Cyclone on a road called Twister