I left Kansas City at 8:30 and made my way to my target area of Burlington Colorado. I got on the first warned cell then drop South to the one behind it just as it became tornado warned. The big thing from this day is that this was my first Chase with my new truck and I was able to get a wimpy tornado photo with it. Not a bad day! 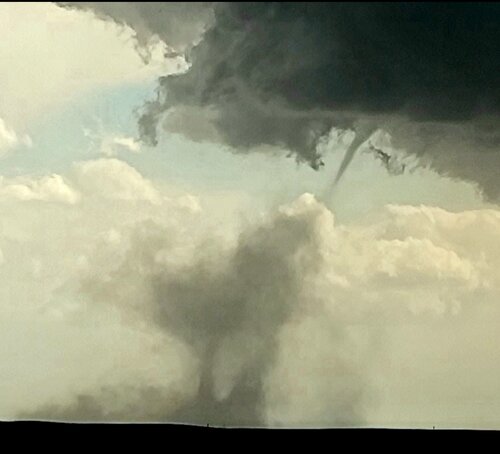 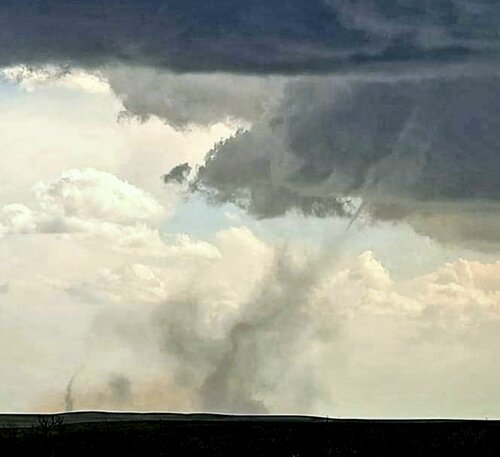 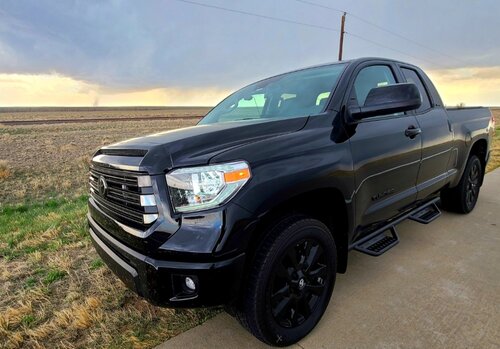 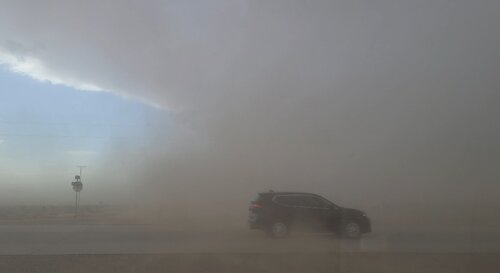 I was one of the folks on the Single Supercell Show™ in NW TX this afternoon. Originally targeted the Vernon area, but dropped south once the only storm in town showed right-moving tendencies. Was originally going to take a Crowell > Paducah > Guthrie route, but the hail core was represented on reflectivity with colors of purple that were incompatible with my rental car agreement. Decided instead to drop south from Crowell on Highway 6 for an intercept near Benjamin, TX. Road options were limited.

The circulation tightened and intensified just before the storm crossed the highway. I headed north on 6 for the intercept, stopping short of the well-defined clear slot. I didn't observe any obvious tornado, but word on the internet is that Reed drove into it. He was on the same highway, just a bit north of me, so apparently it *did* produce. 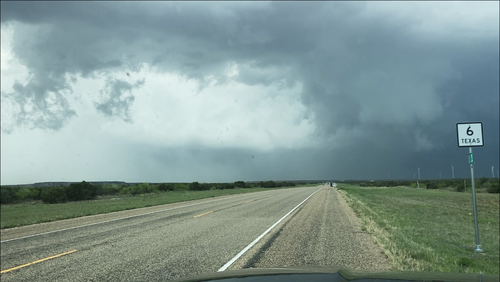 I then paralleled the storm to the south on Highway 82/277, all the way up through the Wichita Falls area, where it finally started to weaken (some 3-ish hours later), revealing a pretty barber-pole updraft. 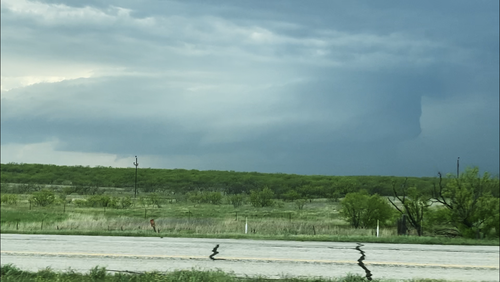 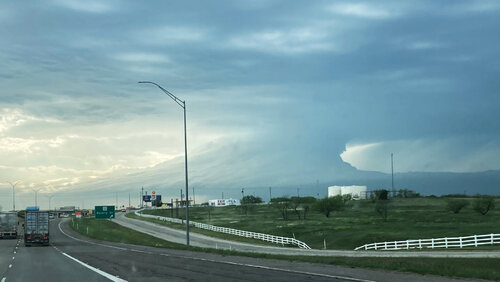 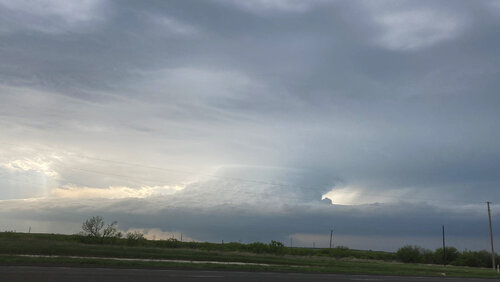 Not a bad day, considering I had set the bar pretty low after the guidance kept trending downward. Celebrated with some BBQ for dinner, and I'll take another crack at it tomorrow!

Commuted from Denver to Seibert to start my first 2021 chase. Saw several landspouts and gustnadoes on the tail end Charlie of the messy complex near Kit Carson. Sirens were sounding as I passed through town. I was slightly late closing on the storm that went from nothing to producing spouts in a short time. The spouts were mostly observed from several miles away, too far to get any high quality photos. On the way home saw some gorgeous Mammatus. Chase ended at about 8 hours and just over 1 tank of gas. 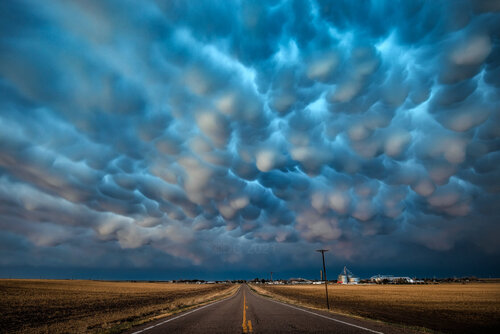 Was a bit behind on the landspouts, but fortunately you can see forever in the high plains, so I was watching them from afar while making my approach. The spouts stopped as I got under the storm, go figure Still though, added three stat-padders to the count. Not all home runs end up in the third deck. Chased north Texas/SW Oklahoma with Cody Dunkle, whom I met on this very website. We met in person in Lincoln the evening before and spent the night in Dodge City, still undecided on whether the Colorado or the Texas play was the right move but wanting to be in easy driving distance from either. Determined in the morning that, despite the lack of consensus among CAMs, the geographical extent of the best parameters was greater in Texas and so we elected to play those odds. For the second time in five days, targeted Childress and found myself in the parking lot of the Childress Pilot watching satellite, and similar to last Friday the first storm to fire was to the SSW and it ended up being the main event for the day.

We hesitated a crucial few minutes to move on it, which meant we could not make an initial intercept south of Paducah without inviting baseballs into the car, so we stepped east and then south and ended up watching some very low circulation pass within a mile to our north, just north of Benjamin. At about the same time that other more well-known chasers were making their charge into the breach on what was called in as a tornado, Chris and Cody were bravely turning tail and heading south to avoid RFD. The limitations of the road network put us far out of position for the next 30-45 minutes on the storm, but the benefit was that once we had caught back up, outside Electra, we were treated to excellent views of the Gandalf-hat classic supercell structure.

After putting some distance between ourselves and the cell once more to cross the Red River at Wichita Falls, we met up with it for the last time near Davidson, OK, where Cody captured a nice, brief funnel looking south from highway 70 as I focused on the road. With darkness falling and energy waning we spent awhile chatting with chasers at the Love's by I-44 on the Oklahoma side of the Red River. In general today we had a great time talking to other chasers, well-known and not so much—an aspect of chasing I often miss when solo.

We also chased north-central Texas the following day but the less said about that the better. 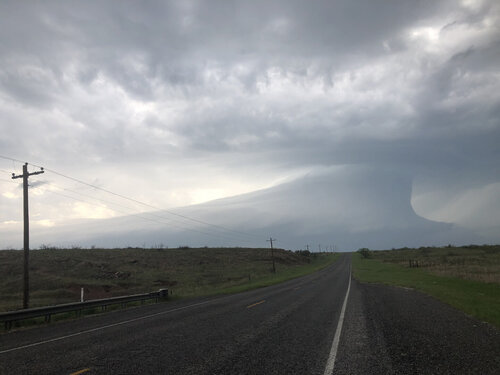 ^ Structure near its peak looking north toward Electra, TX

Going through my video footage, it looks like I *did* capture the Benjamin/Trescott tornado on my approach to the clear slot. Barely visible on the original video, the very slight tornado-shaped silhouette caught my eye. Turning the Contrast-O-Matic machine up to 11 shows it much better. This was before it crossed Highway 6. This tornado was surveyed as an EF-3 with a max width of 300 yards and path length of 8 miles. 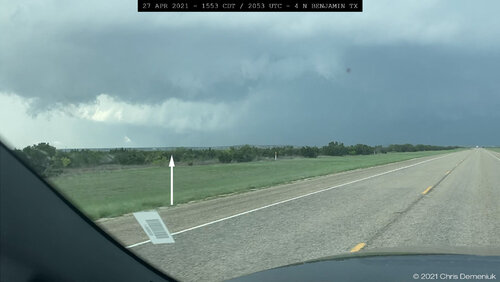 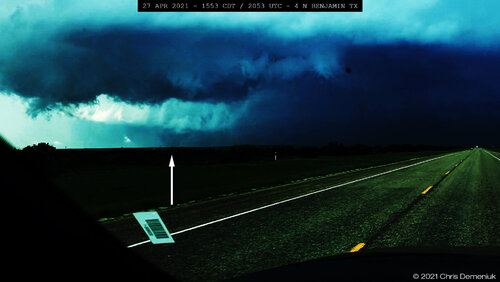 I chased in Colorado this day. It was quite the drive/distance (6.5 hours) to go for what was a marginal setup, but
1) the consistent helicity tracks on the CAM's had me intrigued
2) I thought I would stay in Kansas with Goodland as an initial target which initially made it about a 5 hour drive
3) It's been 8 damn months since I've chased and I was going to go regardless!!

In the end, I didn't make it to the "storm of the day" as it was producing the landspouts and was tornado warned bc I didn't give myself enough time to adjust that far southwest. However, once I was at Goodland and saw what was going on, I made a break for it. I came upon the storm after the tornado warning had been dropped and the severe tstorm warning was almost done with as well. I turned west towards Kit Karson and the storm and it was still producing a lot of blowing dust and outflow that would occasionally kick up some rather impressive looking dust devils.
I played around with the storm a bit on the backroads which actually made a pretty decent network west of Cheyenne Wells. As a side note, has anyone else used the app, maps.me? I know it's available for iPhone, but not sure about Android. I use it all the time now as it allows you to download very detailed maps and access them offline.
At any rate, I made it back to the highway and was heading north out of Cheyenne Wells, when I looked to the west and thought I saw something suspicious. I took the next gravel road west at the huge wind farm and sure enough the storm was producing one more nice, big landspout. This was my first landspout I've ever seen after 13 years of chasing! I've only recently started to go to Colorado though where it at least seems like they are the most common.
I was only able to get video and it dissipated before I could get really close. After that I started to head back north and made it back to Goodland ahead of the line of storms. Decided to start heading home and made it back at 2a after 955 miles.

I put together a video of the landspout and some other swirling dust stuff as well as a 10x speed video from dashcam.