Bit of a late report, but thought I would throw up a post for this day. I chased up in east central SoDak this day and experienced my best structure of the year as well as a tornado warned storm and some large hail.
I picked my dad up in Sioux Falls for what would be our first chase together ever. We headed up to southwest of Aberdeen, SD. An initial cell had formed and grew rather impressive, but became outflow dominant.
We stayed on the southern part of the small line and soon a couple of other cells formed south of the first storm. We moved east with the storm rapidly growing and came across some hail up to quarter sized just west of Warner, SD.
We then headed south on Hwy 281 where the most southern cell had become dominant and we almost immediately ran into hail again. This time the hail was up to ping pong size. We stopped along the side of the highway to let the hail core cross and ended up being glad we did as soon a couple of reports of baseball sized hail came in just a couple of more miles down the road from us.
We headed south and then east towards the town of Conde. About this time the storm became tornado warned just before 7p. The couplet wasn't real impressive, but for a while it looked like it might drop something with a big RFD cut. However, it soon transitioned to outflow dominant as well.
We moved east with the storm and the highway led us up a hill which upon looking back to the west towards the storm gave us a breathtaking view of a mothership HP structure with clear blue skies to the south and intense motion on the leading gust front.
After snapping some pics we continued east with the storm for a while before calling off the chase as it became closer to dark.

Video of some of the big hail: 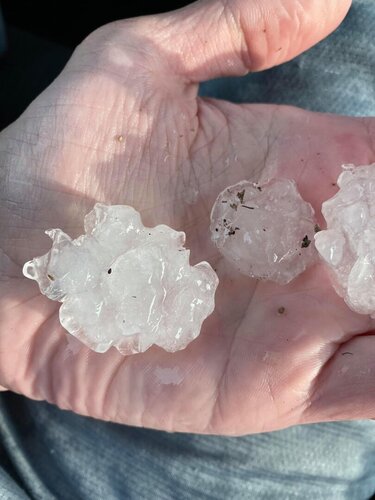 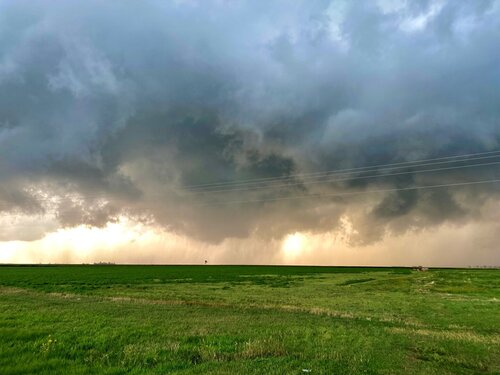 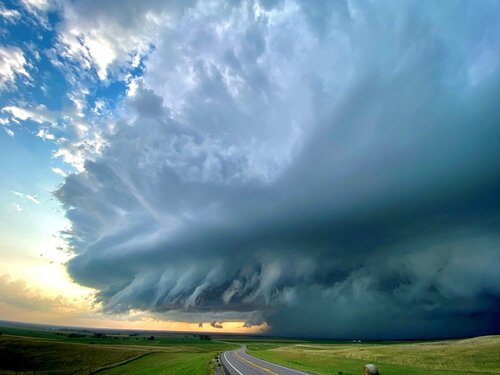