I was on the Shell Rock-Waverly, IA storm on Wednesday, due to a combination of mistakes and my reluctance to get especially close (I prefer to keep the whole meso in view, rather than get underneath it) I didn't get any clear, definitive shots of the tornadoes.

Seen pictures and videos from several chasers that were on the large/EF3 Lake City tornado, and the much more photogenic Stanhope-Jewell tornado. Those storms were too early and too far west for me. Coming from Madison, my work day chase range is pretty much limited to I-35 eastward in Iowa and I-80 northward in Illinois (terrain in Wisconsin sucks except for a small part of Rock County just north of the IL line).

First photo is looking west from the junction of US 218 and IA-3 between Shell Rock and Waverly, timestamp according to my camera is 5:14 PM CDT. According to DMX's preliminary survey, the first tornado began southwest of Shell Rock at 5:16. I believe the incipient tornado is that nub lowering between the two trees at the lower left. I was also receiving small (up to about dime sized) hail at this location.

This was where I made my crucial mistake. I'm coming to realize one thing I need to get better at is recognizing when I'm actually in good position on a tornadic supercell. My instinct is always to keep moving and stay ahead of things (and stay out of the rain), but if I'd just held my ground here a few more minutes, or even gone north on 218 just far enough to make a U-turn and come back south, I would have had a great view of the tornado for several minutes. 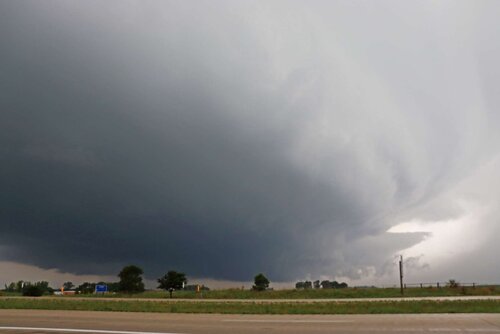 Instead, I went north on 218 to the next exit (getting into blinding rain); then hopped off there east which followed a zig-zag path back to IA-3 in Waverly. I followed 3 through Waverly, where the sirens were wailing. As I was emerging from the town on the east edge, I looked in my rear-view mirror to see what sure looked like a stout elephant's trunk funnel! However in the time it took me to pull over (just west of the intersection of 39th St. SE and IA-3), the feature shrank to what you see in the picture below, which still sure looks like a funnel with a possible diffuse debris cloud or at least rotating rain curtains underneath it. In a few more seconds (naturally, the amount of time it took me to switch my DSLR to video mode and start recording), the feature disappeared, although strong cloud base rotation persisted. 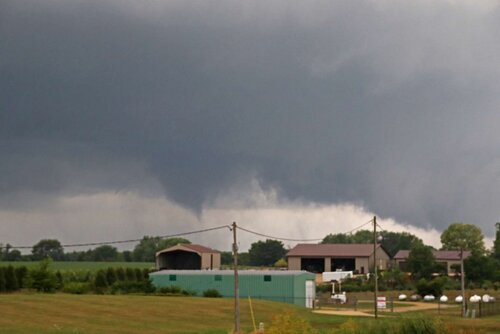 The evolution I observed greatly resembles the period from about 6:05 to 6:44 in this video from Live Storms Media, albeit from a different angle and further away. However, the timestamp on my DSLR for this shot is 5:27 PM CDT, or in between the two tornadoes in the Shell Rock-Waverly area according to DMX's preliminary survey results. So either my timestamp is wrong, or the survey is.

The storm, like most of the other tornadic supercells I've observed, was also spamming CG lightning in the clear air between the meso and the forward-flank precip; those (positively-charged?) instantaneous bolts with little to no branching, followed immediately by shotgun-blast thunderclaps. For this reason, I didn't feel safe getting out of my car for very long, let alone setting up for tripoded video.

@Michael Towers I've been trolled by Iowa numerous times. I believe this was the first time I went to the state for a tornado chase, and actually got on a legitimate tornadic supercell. It's called Lieowa both for the way high-ceiling, hyped/15% hatched setups bust, and the way sleeper (5%, or even 2%/no-watch days) setups sometimes produce gorgeous tornadoes - but only the ones that you (or I) don't chase!

While it's always frustrating being on the right storm at the right time and not fully capitalizing on it, I prefer that to a total bust (either no storms form, totally missing the storm, you drive 12 hours and storms fail to become tornadic in an environment where they were expected to [coughLeotiKSMay26cough], storms form but immediately go linear, etc).
Reactions: Jeff House, John Farley, JamesCaruso and 3 others