Was actually going to chase South Central Iowa today, but I didn't like a lot of what I saw and didn't feel it warranted a 3 hour drive. So to my surprise the sun came out for much of the day despite being north of the warm front. This helped in the afternoon to modify the front northward a bit and it got pretty humid, so I spent the afternoon in our pool and watched radar and surface observations. I decided around 5 or so to get out and get my cameras together and at least get out into the country as a supercell was organizing over Southeast Iowa. So off I went headed northwest out of Macomb.

In my mind the main threat today was always significant hail and significant wind. I thought we were a bit too stable for tornadoes, but then again things happen, so you can't rule it out and the storm had a decent couplet for a while. When I finally got on it, it was warned for nearly baseball sized hail and 70 mph winds. The structure blew me away, was one of the best structured supercells I've seen in my backyard. I felt like I was in Nebraska or South Dakota for a bit here 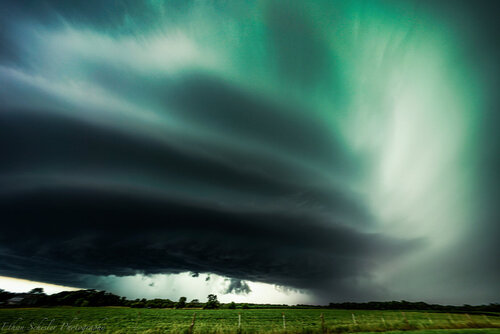 This was shot at 12mm on my Sony A7RIII and is one of numerous I got, I actually made.a panoramic here of the inflow tail extending way to the right and then clear skies off to the southeast with a rock solid updraft. I haven't finished that yet though as I had some work to take care of tonight after chasing.

I continued to follow it south dodging periods of golf ball and larger hail that was falling well out ahead of the storm. 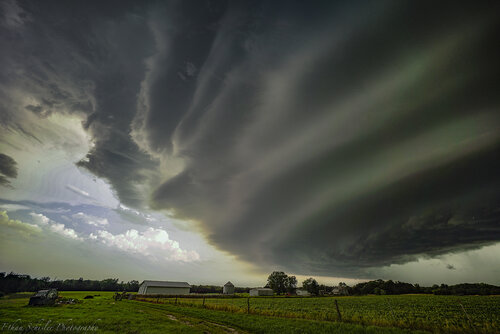 I followed it south of 136 where the structure started to get more muddled but was still good. However the rotation picked up and so did the wind. I experienced a 20 minute period of probably 70+ mph winds in some really really bad terrain and was worried about trees falling onto my car. The storm had rapid rotating rain curtains as well, so I was concerned about potentially driving into a rainwrapped tornado. Especially since my data dropped off in this area. I got ahead of the storm near Plymouth and accepted defeat and rode it out experiencing golf ball to baseball size hail and severe winds. I saw several vehicles lose their windshields. I luckily found shelter, so aside from a few new dents, I got away pretty good. 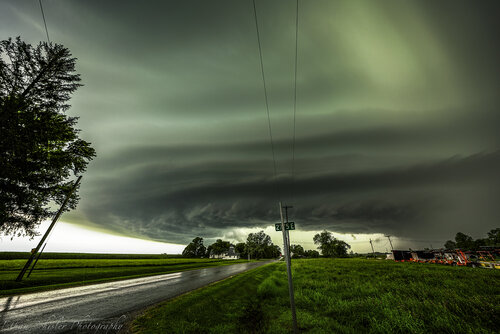 I may add more photos to this report thread, this is all I've gotten done so far as I'm working on video now. Certainly a day I will never forget just 25 miles from home.
Reactions: EmiLie Joz, Jeff House, Verne Carlson and 12 others

I have two "experiences" from this day, one from a chase I went on and the other from right here in Omaha.
I ended up chasing the very conditional risk in southern Iowa. I didn't have much optimism but since it was only a couple of hours away, I headed out anyway. I made it out to southwest of Des Moines around 4 and hung around the OFB. There was a field of cumulus that seemed to get slowly more agitated, but nothing initiated until around 8p.
I played around with these storms south of Des Moines for a bit as they would sometimes develop nice lowerings/wall clouds, but nothing came close to producing. I left the first cell I was on just east of I-35 and headed back northwest towards a cell that was barely moving by Mount Ayr. This cell was warned for up to ping pong sized hail at one point and again sometimes had some weak rotation but nothing too impressive.
Meanwhile I was also paying attention to what was going on back in Nebraska and near Omaha. A new watch was issued until 5am and storms were exploding first over central Nebraska heading rapidly east. Around 11ish, new storms starting forming eastward along the warm front/OFB into western Iowa and those were dropping south.
About 1130 a warning was issued for Omaha for winds up to 65 mph. I tried texting my wife, but she was already in bed. I decided to start heading towards home and was about 2 hours away. The storms though that had developed in Iowa were dropping south pretty fast and soon on my way home I was overtaken by the storms.
I managed to stop just before they were on top of me and took a few long exposure pics. I'm kinda mad at myself for my lack of effort to try and get an actual good shot with my tripod, instead opting to try and hold the camera as still as possible as I took 5 second exposures of the incoming storm.
I ended up getting overtaken by the storms near Stanton, Iowa and had to pullover due to the winds gusting up to 60-70 mph and the torrential rainfall. About this time my wife texted me to tell me she and the kids were awake now because the power had gone out at home. The storms were now warned for 75 mph winds and tons of damage reports from Omaha were coming in.
I was stuck where I was at though until the storms there let up. Finally after 15-20 minutes I was able to take off towards Omaha, but not before I caught probably the closest lightning strike I ever have on camera/dashcam!

I put up a Youtube video here of the super close strike:

I also put together a 10 minute video of when I was pulled over in the storm near Stanton:

I made it back to Omaha about 230am. It was a bit eerie to drive through a pretty big part of the metro area and see everything dark. At it's peak Omaha and the surrounding metro areas had 191K PEOPLE LOSE POWER! That's nearly 40% of the city and suburbs. This is the largest power outage ever for our power company OPPD!
I lost power from about midnight to 730am the next morning, but as of 10p tonight, 72 hours later, there are still about 28k without power.
Peak wind gusts in town were in the 65-80 mph range, but the Omaha airport reported a wind gust of 96 mph which is tied for the strongest gust ever recorded at the airport. Thankfully we had minimal damage at our house and most of our neighborhood. The older parts of town with the big old mature trees are what have suffered the worst.
I always feel "bad" when I am out chasing and a bad storm hits back home and my wife and kids are alone. They usually handle it pretty well, but it's still a bad feeling to have.

A video posted on Twitter of an entire tree coming down during the storm in Omaha!

Finalizing my report from this day by posting a sequence of shots I never edited on my computer (instead my cell phone as my laptop was out at the time). Here are some shots from the softball size hail slinging storm near Lomax, IL on July 9, 2021. 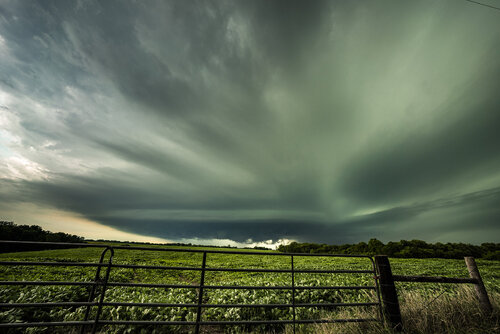 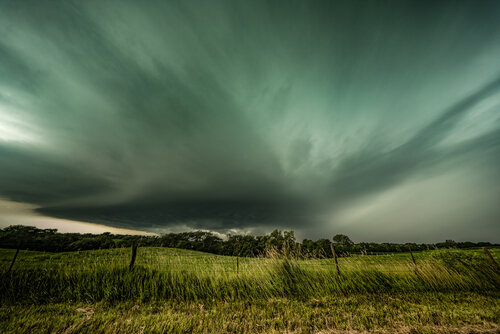 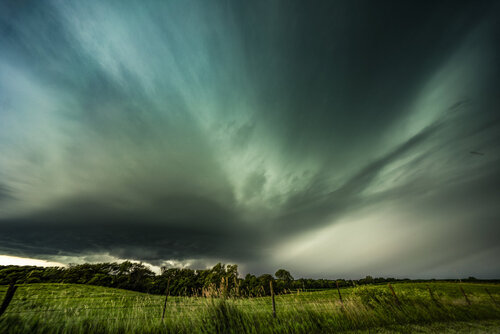 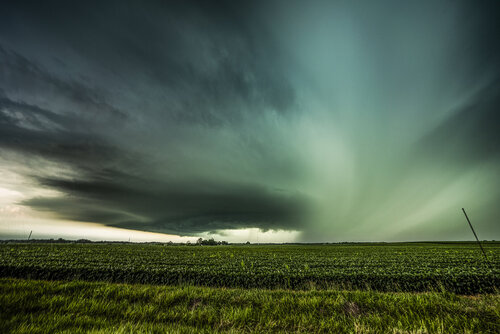 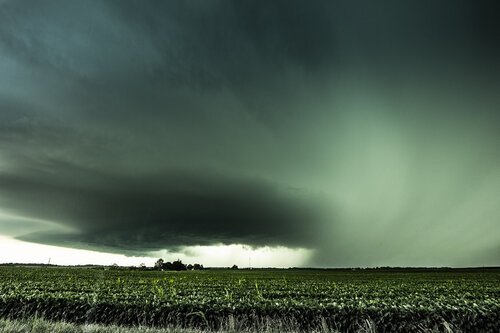 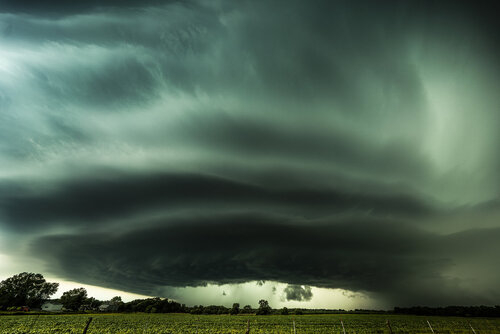 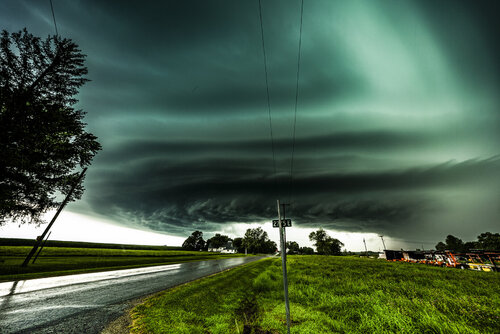 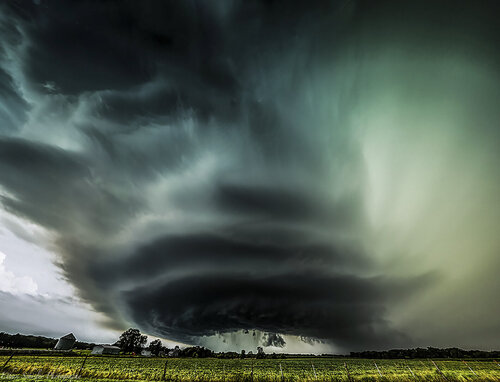