I know there were a few people that chased yesterday so I figured I'd throw a reports thread in here. I didn't wake up until around 11am because I'd been out late the night before shooting lightning and then the previous morning I was down near Quincy chasing tornado warned storms late, so I hadn't chased the previous evenings tornadoes. I figured I might as well go out. I liked the fact we had strong southerly surface flow gusting in the upper 20 mph range at times, moisture was great, lapse rates weren't awesome, there was ample shear with 0-1km shear near 35 knots and 0-1km SRH around 300 on the late morning VWP from ILX. So I bolted out the door with my one camera and the lens attached to it from the day before and headed east. Tornado watch was issued and I headed toward Lincoln.

I debated about heading N or S. There were numerous tornado warnings NE of me and the low level shear was better with better critical angles, but I also saw a nice discrete supercell down by Jacksonville along with a line of cells going up to the W. One caught my eye SW of Petersburg and would pass close to Mason City where I had been about 30 minutes prior (grr). So I decided to actually head S a bit and then W and intercepted the first storm around Greenview, IL around 2pm. It was a gnarly looking HP supercell and had a rotating wall cloud on it. I was wondering why it wasn't tornado warned at the time, but I also didn't have great signal. 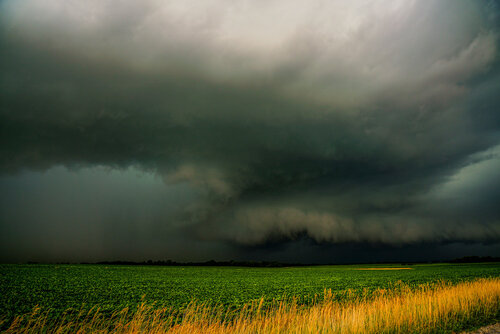 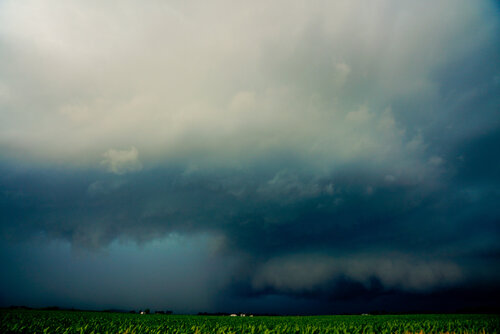 I really regret not grabbing my 12-24mm lens here, the updraft above me was pretty sculped out. I couldn't even capture it with my phone's pano setting.

I went N and E and followed this for a while. It produced a funnel cloud near Middletown that came 1/2 way down near the wind farms, but I couldn't confirm a tornado and RFD wrapped it in rain. 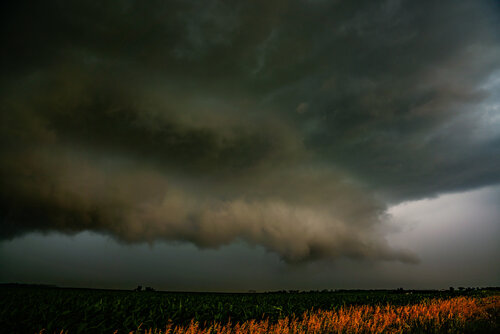 Some more dramatic HP structure that IL is known for 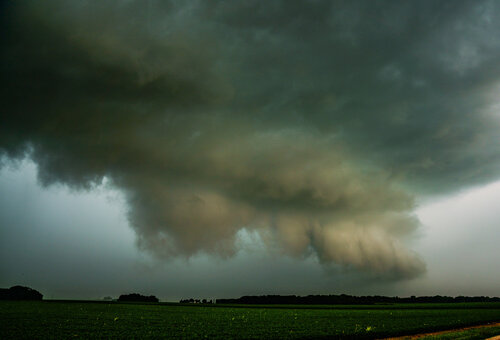 And at this point it is dead.

I headed southwest and caught the original Jacksonville storm as the tornado warning expired. It had decent structure near Williamsville, but was clear it was not going to be living much longer. 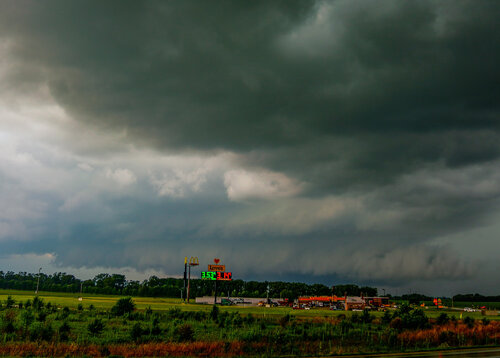 The cell back to its SW though near Sherman was gaining strength and my phone went off for a tornado warning. I caught visual of it just NE of Sherman looking SW and it had a rotating wall cloud with scud being pulled in and huge RFD core. I didn't have long before I would be engulfed by severe winds. I noted strong rotation, but couldn't confirm anything again. 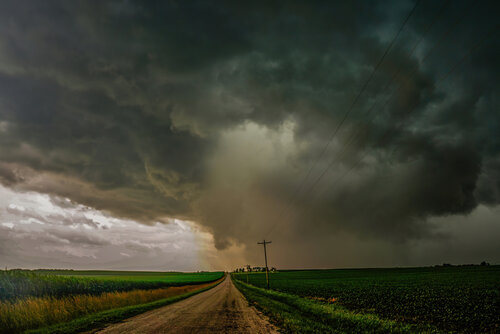 I headed northeast toward Mount Pulaski. When I passed through Buffalo Hart though I had a large rotating wall cloud and thought I was going to at least get a weak tornado, which there very well may have been. I had numerous rotating rain curtains and in town there was easily 70 mph winds with trees blowing down, dust being blown out of the grain elevators and coming off the roofs of the buildings. I had to dodge some downed trees on Highway 54. I got to Mount Pulaski and got visual of the storm. It had pretty much gone outflow at that point. My phone went off for another tornado warning, but I turned the car around and went home. It was a good enough day for me. A couple dramatic HP supercells, some strong wind, and several close attempts. It was good enough for me for a 2 hour drive from home.
Reactions: Michael Towers, Bobby Little, Randy Jennings and 3 others

I just learned thru NWS Lincoln, that the feature along highway 54 SW of Mount Pulaski, in my last photo (on the far right) is actually a brief EF-0 tornado that was ongoing and did minor crop damage per the survey done by ILX. So I guess *some* circulation did indeed make it to the surface.

All the more reason I need to purchase a dedicated dash cam (sold all my AX700, AX100, and AX53 cams last year) and figure out a mount for the full frame mirrorless. +1 I guess.
Reactions: Todd Lemery and Jeff House

Late to the party, but after some mechanical problems on my truck kept me out of the plains in May (and ate up the remainder of my chasing budget), I couldn't ignore a setup in my own back yard, even if the primary tornado threat was from embedded mesovortices. I targeted the Grand Ledge area NW of Lansing, where I felt the best opportunity was to catch early convection from boundary interactions that could tap into enhanced mid-level flow and backed surface winds. The goal was to jump on any discrete storms in the area before the whole thing turned into a HP mess.

When some popcorn convection ahead of the advancing linear system yielded to a single dominant storm with rotation west of Marshall, I started heading south for the intercept. The storm took on the classic appearance of a supercell, and once I cleared the forward flank, I was presented with a rotating wall cloud (well, as much of it as I could see from the freeway through the trees). 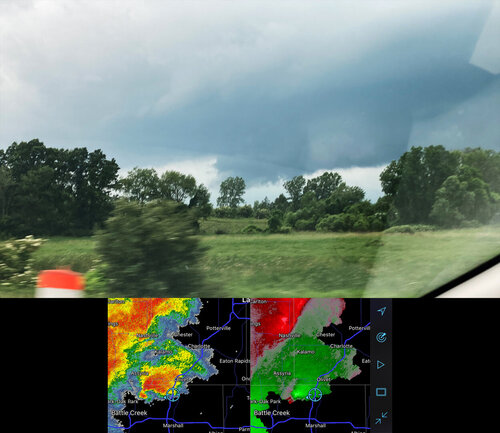 Rotating wall cloud playing peek-a-boo through the trees while I overshoot the notch.
2021-Jun-26 1657 EDT (2057 UTC) 3.5 SSW Olivet, MI
​
Unfortunately the interstate was under construction, and down to 1 lane in each direction. In addition, open exits were several miles apart. After overshooting where I wanted to be, I was finally able to exit the freeway, then re-enter northbound to exit at Olivet, where I hoped to be close enough to see better given the terrain.

As I approached the Olivet exit from the south, a clear slot was evident, with an obvious lowering on the north side, in the usual area favored for tornadogenesis. Trees again blocked my view, but the storm had went tornado warned (spotter confirmed) at about the time I was exiting and re-entering the freeway, and radio chatter indicated that both local spotters and State Police troopers were reporting a tornado on the ground. 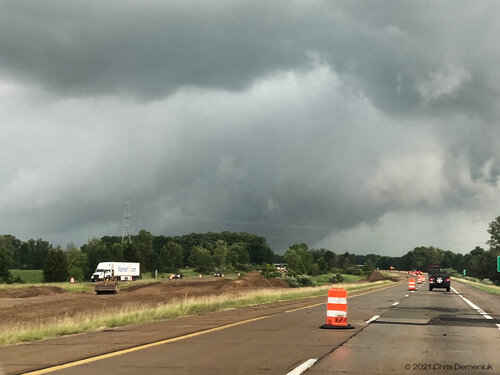 RFD clear slot with something interesting happening on the north side.
2021-Jun-26 1708 EDT (2108 UTC) 2 SW Olivet, MI​
After exiting the freeway at Olivet, I took to the county roads to stair-step northeast and parallel the storm. Unlike the southern plains, our dirt roads here are more of a sandy gravel consistency, and don't immediately turn into a slip-n-slide when wet, so despite the other terrain drawbacks, I had that going for me.

As I crossed a clearing, I was able to make out a bowl-shaped lowering that extended to at least the tree line, with streaky rain curtains moving left-to-right in front of it. Was this a tornado inside the bear's cage? Was it just a ground-scraping meso with RFD-blown rain in the foreground? I can't say, as (1) I was moving, and primarily focused on driving, (2) these open fields sporadically pop up, only giving brief glances at the storm, (3) by this point, the linear system had caught up to this storm and was about to ingest it, and (4) despite my best stair-steppin', I was still losing ground on the area of interest. 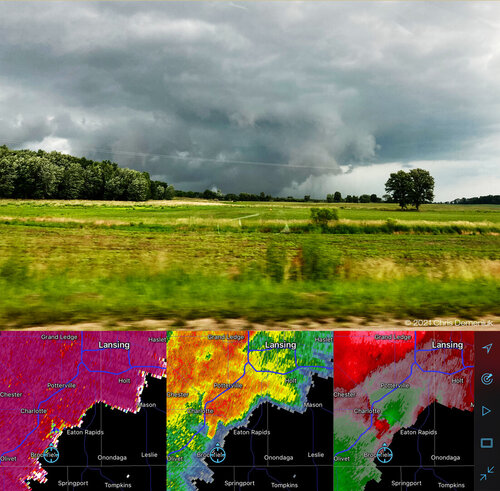 Confirmed maybenado.
2021-Jun-26 1720 EDT (2120 UTC) 1 E Brookfield, MI​
I want to believe that this is a photo of a tornado, but again, I can't be sure. At about this time, the tornado warning (still ongoing) was updated to a radar confirmed tornado, which correlates (no pun intended) with the sloppy CC hole that appeared for a few scans at about this time. As of the time of this post, NWS GRR has not yet released the event summary for that day, and despite a few surveys they have already shared for other tornadoes that afternoon, this storm/area is not one of them.

After the last photo was shot, I was able to get slightly east of the storm, then run north, but by this time, it was already falling apart as it merged with the line approaching from the NW. 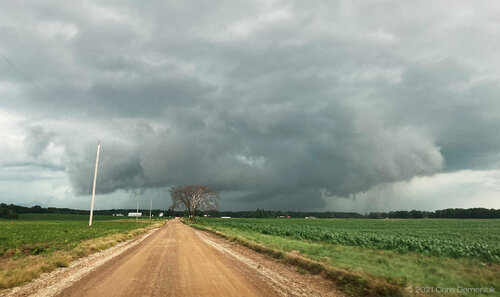 He's dead, Jim.
2021-Jun-26 1728 EDT (2128 UTC) 4 SW Eaton Rapids, MI​
Despite being absorbed into the advancing line, the mesocyclone persisted for at least another 60 minutes or so, triggering a string of tornado warnings as it migrated NE. I did my best to keep up with it, but after being overtaken by the precipitation on the leading edge of the line, along with having to navigate the more heavily forested areas to the northeast, I called the chase. 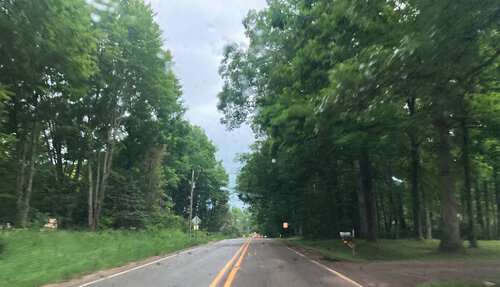 I ended up chasing several supercells across Central Illinois on this day.

The first storm I encountered was near I-55 in Gardner. This storm had rotation prior to arriving on it, and looked somewhat interesting visually at first. That quickly changed though, as it visually became outflow dominant and as it steadily weakened. I allowed the storm to pass to my east, and continued on my way to the south. Going further south, I arrived on a pair of storms in the Forrest/Chatsworth area. I witnessed a funnel cloud on the lead storm, before it went out of view. The second storm slowly organized, and eventually developed a wall cloud. I ended up letting both storms pass to the east, as I wanted to get down into the heart of Central Illinois for the main show.

Here are a few pictures from the day... 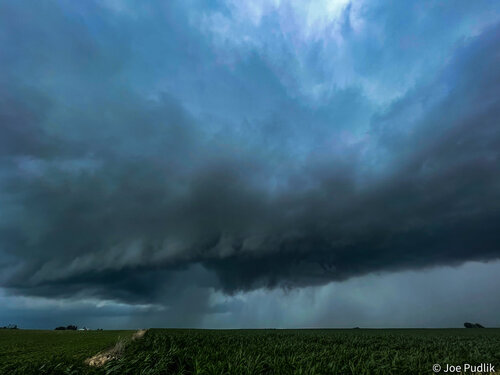 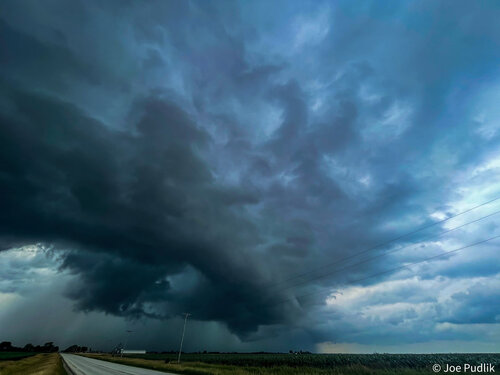 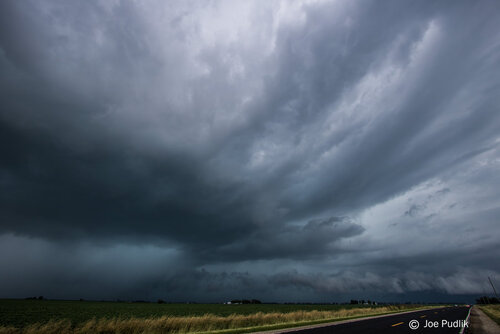