I'm posting this one under June 24th reports even though it technically happened after midnight on June 25th northeast of Quincy, IL. I was out shooting lightning and monitoring the line of severe storms that was coming in from the SW. I had passed on Kansas earlier in the day as I didn't like the fact that storms were probably going to go upscale and there was the potential of severe weather in my backyard. With gas prices where they sit these days, I'll take a chance on something local versus driving 6-7 hours, especially with my back hurting. I headed south out of Macomb around 11pm and got toward Camp Point, IL. I got an alert for a tornado warning, there was a lot of cloud to ground lightning, but I couldn't get much of it because it was raining and obscured by precipitation. It was also unbelievably muggy outside. My car said 78 degrees and the local METAR had 75 for a dew point, miserable. 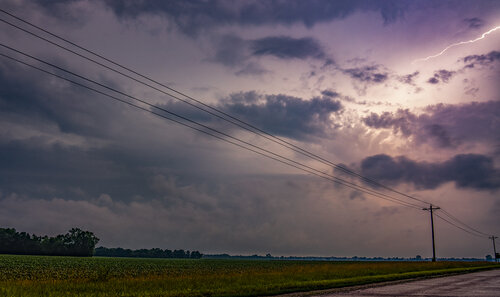 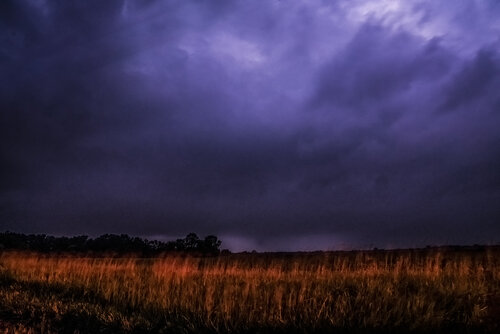 As the storm approached me though I was between Camp Point and Huntsivlle, IL. A very rural area that I'm familiar with as I had family in the area. There is no cell coverage out here, aside from the EAS, that was all I had. I caught glimpses of storm structure to my SW but it was very murky. A product of the poor lapse rates, but it's what I expected. There was a suspicious lowering, what was it? Was it scud? Was it a wall cloud? QLCS spin up?

I was shooting stills so I decided to zoom in, keep the shutter speed as fast as possible for how dark it was (1 second), ISO 6400 and let it roll. 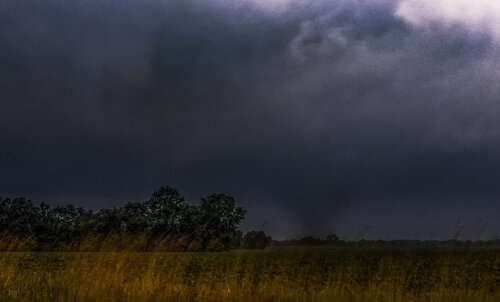 The shapeshifting feature had morphed, I didn't know it at the time but a possible tornado was occurring to my SW. It was very dark out there and all I could see were the long exposures, so it wasn't until I got home that I realized how close this was. 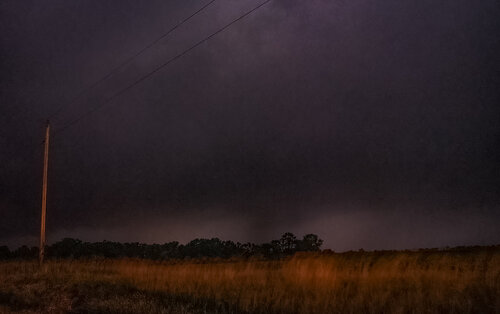 Moves behind the tree line a few seconds later. Storm motion is to the NE at 65 mph per the NWS warning. Probably not quite that fast, but they were hauling it. 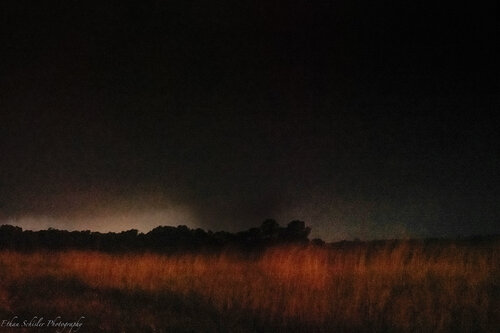 The feature grows again and gets wrapped in rain. I get slammed by probably 60 mph winds and when I turn around to my NE I could see 5-6 bright blue power flashes in the direction the feature had gone. I headed down the road and found some trees had been blown down in the area, but that wss about it. It was around 12:45AM when this occurred, so by now it was after 1am.and I was still shooting photos and getting tired, so I went home. I got ahold of LSX about the event and they said they would investigate it, but I have a feeling it will go into the vault of uncertainty. I downloaded the archived radar for the time on radarscope and there was certainly a circulation on the ILX radar similar to other QLCS events I've seen, so its possible. That area is so rural though, most of it being wildlife preserves, its kind of the old saying "if the tree fell and nobody heard it, did it really fall" saying out there.

Anyway I got home after 2am and we had some strong winds from the MCV that was moving over and eventually fell asleep and elected not to chase the next day due to exhaustion (4am when I fell asleep). Which turned out to be a small mistake, but oh well. Anyway that is my report for a brief chase again close to home that featured decent storms. Its not been a great season locally, not even a meager decent one, but at least it is picking up.