This being my first local chase of the season, my expectations weren't exactly high. They never are when it comes to chasing Ohio. However today was an absolutely incredible chase

Was a bit late leaving as I had an early afternoon appointment, started heading to my target of Celina to Lima OH. Along the way I noticed two discrete supercells fire in Eastern Indiana. Surface obs indicated a boundary near by so I began heading towards Noble Indiana. Went northwest from there and just a few miles outside of town we witnessed the full cycle of the first tornado of the day. Made it in perfect timing.

Once that elephant trunk tornado had lifted we went back through Noble and was a few miles NW of Fort Recovery when the second cone tornado touched down essentially right in front of us. Taking out a barn and heavily damaging a house. We observed this tornado for approximately 6 minutes before it wrapped in rain. At this point I noticed a cell near Saratoga IN moving in the direction of Dayton. It had clean inflow and looked a lot more promising as the other storms were quickly going upscale. We met up with the new cell in Palestine Ohio and followed as it went through multiple cycles. We did not witness any tornadoes from this, however the structure associated was incredible to say the least.

Once the supercell was entering Dayton we decided to head back towards Xenia. Encountering hail ranging from 1" to 2" along the way. The largest of which being in Xenia.

Overall a great day for one that I almost sat out. 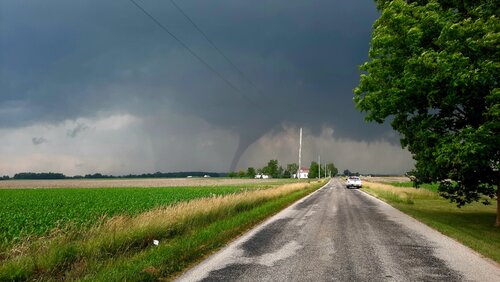 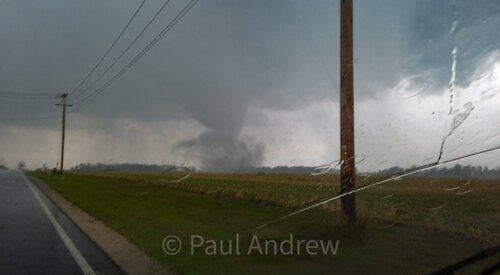 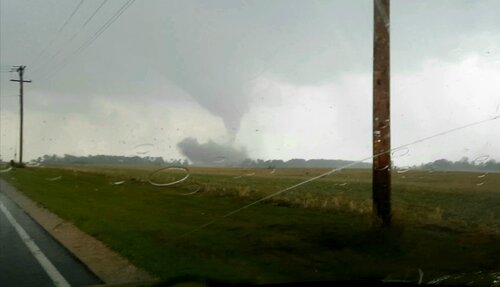 Managed to "accidentally' intercept" a tornado last night in Northern Fulton/Southern Knox counties in IL. I went out JUST to shoot lightning when I noticed intense wind picking up NW of my hometown and rotation so I headed east toward London Mills, IL. I took the structure shots just west of there and then when I got east of town, I got into some extreme winds and flying debris and the grain bin/elevator you see almost rolled into my car. I'd estimate the wind to be in the ballpark of ~90-100+ mph. NWS is doing a survey today, but from the looks of it, it looks to be tornadic damage with debris scattered in all directions, hundreds of trees snapped, power poles thrown, outbuildings destroyed etc and even one gas leak. Here are some photos of the storm before it produced and then some screenshots from my crappy Iphone video I got lol. Definitely the latest tornado in the night I've ever chased at around 12:03AM. 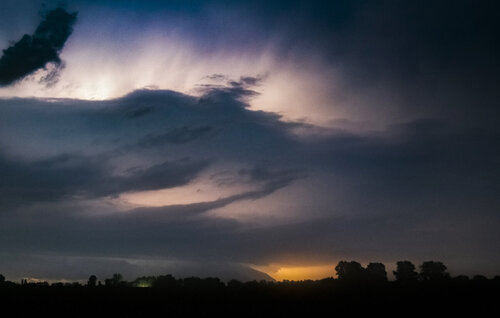 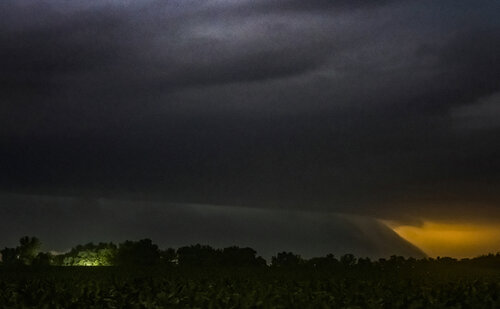 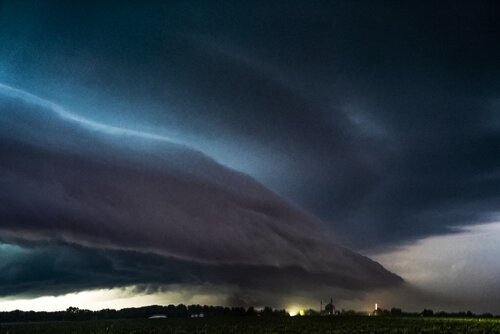 Grain bin down just E of London Mills, IL that rolled across 116 and almost into my car.

And my icon just for posterity's sake lol. 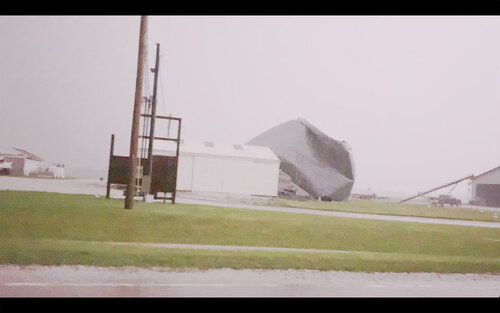 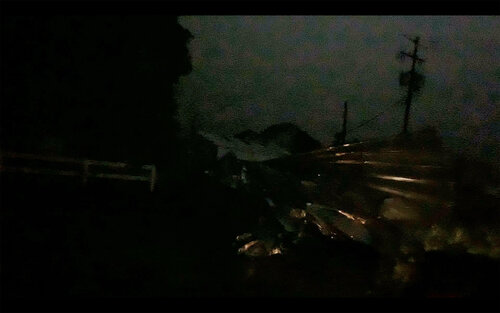 Did you see the tornado near Noble touch down? If so, what time did that occur?

Did you see the tornado near Noble touch down? If so, what time did that occur?
Click to expand...

Yes, that was the Elephant Trunk tornado between Trinity and Noble. It was on the ground approximately 4:05 PM until 4:10 PM Eastern. The second cone tornado touched down about 10 minutes later.

Update to my report earlier as the official survey has came out here in IL.. The tornado I thought I observed has been confirmed as a rather long lived EF-1 tornado that tracked for nearly 11 miles touching down just 3 miles from my house and moving SE. I observed it shortly before midnight and came very close to it toward the end of its life cycle. This is officially the latest in the day I've ever intercepted a tornado and I don't think it can be beat lol. 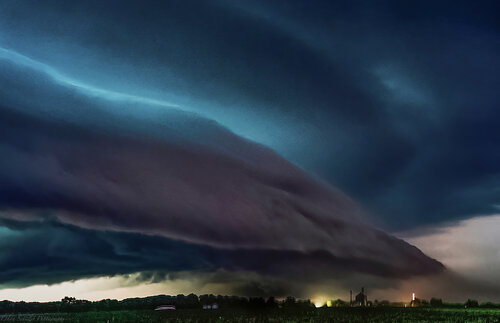 Tornadic storm with likely tornado under it (just to the left of the light) at 11:57PM just WSW of London Mills, IL in Knox County. 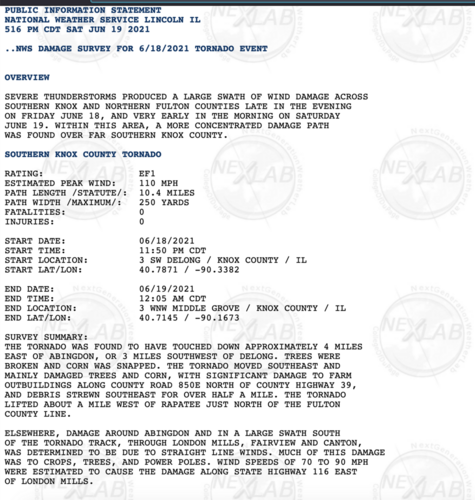 Storm survey by NWS Lincoln. This is the closest tornado that has occurred to my house since June 5, 2010. A strong tornado also came close to my house on July 16, 2015 as well. I've had a lot of near miss' over the years but the damage at my place is still quite severe as we endured likely 90 mph straight line winds. Lot of damage to clean up in the days to come and a lot of farmers that will have to start over again sadly.
Reactions: Bob Schafer, Todd Lemery and JamesCaruso
You must log in or register to reply here.
Share:
Facebook Twitter Reddit Email Link
Top Bottom