Short summary: Marathon chase, two supercells, one tornado and some awesome structure all witnessed within a 15 mile radius on a paltry road network. 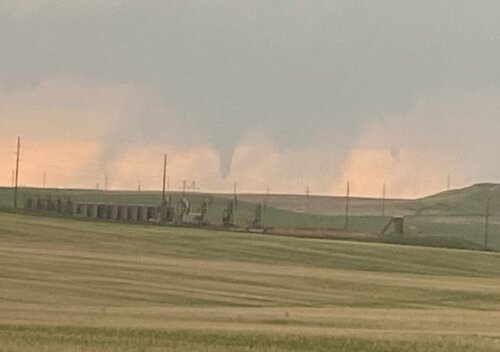 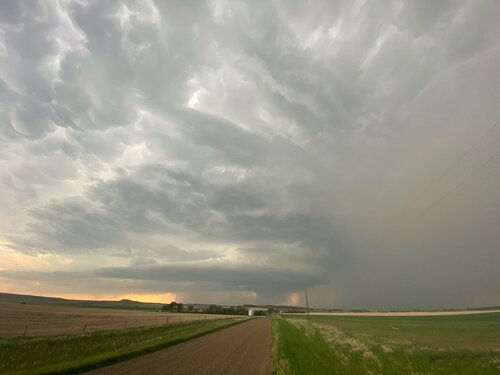 After wavering back and forth I finally pulled the trigger on a one day chase over 900 miles from home despite concerns over meager 3 km CAPE and 0-1 km SRH. Models were in general agreement on timing and placement of features while CAMs were in general agreement in timing and placement of precip. Moderate instability (MLCAPE > 3000) along with decent shear (0-3 km SRH > 300) suggested potential for both memorable storms and tornadoes in an environment likely to be free of crowds with storm motions very manageable at under 20 mph.

So after a long drive after work on Wednesday and a hotel stay in Alexandria MN I made it to my initial target of Belfield ND as storms were already in progress and severe warned along the ND/MT border. I noticed towers going up to my west but didn’t want to risk waiting for something that might not happen and miss something that was already happening, especially given the long drive and the fact that the most recent runs of the HRRR and NAM 3km broke precip where it was occurring but not in the area to my west. Fortunately I made the choice without much delay and got to my intercept point near Alexander before the first tornado was reported, arriving to see a Classic Supercell with a RFB to my southwest. The storm at this point had an elongated core oriented NE to SW (X marks my approximate location): 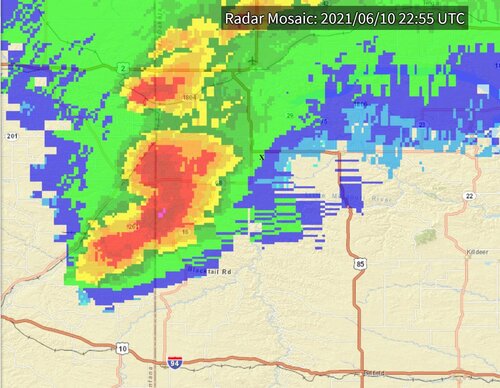 The elongated core then split into three cores: 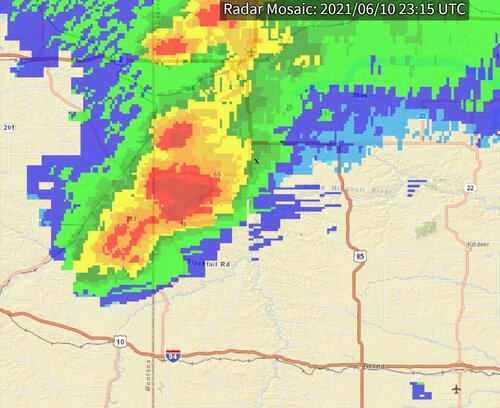 The northern one showed rotation (and subsequent tornado report) before moving away directly almost due north, the middle one I would observe over the next 90 minutes being the dominant one and featuring the strongest rotation and the one to the south what I considered at the time to be a flanking core but which would ultimately become the prize of the day with both a tornado and fantastic structure.

The middle cell produced a couple of downdraft occlusions before transitioning into an HP with rain curtains shrouding my view. The meso was about 10 miles to my SW and typically I would have been a lot closer but the lack of not only paved roads but gravel roads kept me back at a distance where I felt comfortable. Even though the NNE storm motion was at a relatively slow 15-20 mph getting into an ideal position would entail risking both the Bear’s Cage and the hail in the flanking core so I played it safe and hung back. While I was enjoying a long distance rain shrouded view the first tornado report came in soon to be followed by a few more, stovepipe, cone and even a wedge but I didn't see any of them. The cell advanced and I held my position until the precip core got too close for comfort and I retreated eastward on 85/200 to just south of Rawson. At that point I had been on the storm for about an hour and with the slow storm motion was able to watch it pass to my north over the next 30 minutes. Although I didn’t witness any of the tornadoes the storm did have some nice structure and I probably drove less than 15 miles total once on the storm so “chasing” it was low stress and very low effort. Inflow was present the entire time and I observed the storm entirely in a warm, humid environment. Once it passed north I decided to let it go, rotation was waning and I didn’t see road options offering a way to effectively pursue it.

Over the 90 or so minutes I had been on the cell the southern flanking core had been sitting almost stationary but maturing and by now was a full fledged supercell. The velocity scan showed a nice area of rotation but since it was tracking into the same area the first storm already worked over I didn’t think much of the potential and I started making plans to book a room in Bismarck about 3 hours away which would leave me with a 10+ hour drive home the next day. It was already almost 8 p.m. and getting in at 11 would allow for a good night’s sleep. So at that point the chase wasn’t a bust it wasn’t a chase I’d have taken in retrospect, not at 900+ miles to storm intercept and what would amount to an 1800+ mile trip. But before booking the room (I was already on the IHG website with room selected) I decided to take one more look at radar before calling it a day, and almost instantly it went tornado warned.

First cell now to the north of my location with second former flanking cell and now tornado producing supercell to my SW: 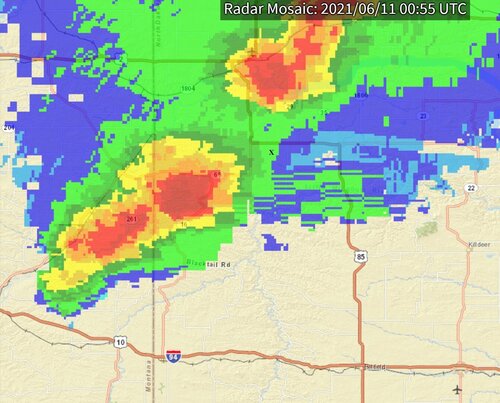 The last time I had looked the storm was obscured by rain but now I looked over my shoulder and holy smoke, stacked plates! I turned around and drove a few hundred feet up the hill back to the same spot I had watched the previous storm pass and as I crested the hill I could now see the base with a nice little cone attached! It didn’t last much more than two minutes but in those two minutes my less than stellar marathon chase went from mostly a dud to rewarding me with my first ND tornado! The storm was probably ay least 10 miles away to my SW and once the tornado dissipated I navigated (as expected with some difficulty) to a spot where I was closer and to the east of the meso. The structure was probably the best I’ve seen since 2010 (Last Chance, CO) and while it maintained a healthy inflow, went through a downdraft occlusion and produced a rotating wall cloud as far as I know it ultimately failed to produce another tornado. I followed it and let it go just west of Rawson, basically only a few miles NE of where I began filming it and where I’d spent the majority of my time on the previous cell: 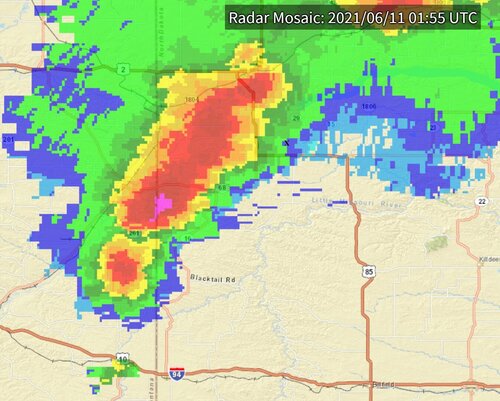 Satisfied with my day I booked my room and made my drive to Bismarck, where my day was capped off watching a bow echo approach and ultimately nail the Holiday Inn Express where I was lodging, which by the way is probably in the top three of all the Holiday In Express hotels I’ve stayed. Great hotel, great staff, 5 stars!

Overall the second storm made it a successful chase and one that proved worthy to take with two memorable storms and my first ND tornado. But unless I’m already out chasing in the surrounding area I probably won’t chase there again, especially if it’s a setup with higher end potential. I know that sounds odd but higher end equals larger crowds and chasing that road starved area among the hordes would be something I’d prefer to avoid. Not only are paved roads at a minimum but so are gravel roads, most secondary roads that looked like options on navigation ended up being minimum maintenance, private roads or over-grown roads that were really no longer a road. Storm motions were slow and the crowds were thin yet I still missed a few tornadoes due to inability to get into a proper position due to lack of road options I felt comfortable navigating.

Props to @Gordon Spencer at Maximum Signal, I never lost data (once again) using my Max Amp Mobile on my 1910 mile trip even though I got way out in the sticks!