Little bit of an underwhelming chase yesterday but still came away with some good stuff at the last minute. I targeted the nose of the moisture plume in Western Kansas near Scott City around mid-day. I don't think this was the actual dry line but instead a pre-frontal confluence feature as obs showed the actual dry line back in Colorado (90s over 20s). We sat there through mid-day while large tornadoes occurred around lunch-time to our east near Hays (wtf?). We coulda made that storm, but I didn't want to get out of our position on that bulge in Western Kansas and honestly most of the chase community was there. We followed a blip from Leoit northward where it eventually died and then shot north after the storm in SW Nebraska arriving around 6:30pm. Saw a distant view of a possible tornado, but I had no service and couldn't see radar so I've no idea if it was. It was SE of McCook, NE.

Dropped back into Kansas and played several supercells near sunset that were ingesting air in the low 60s, but one managed to spit out a bird-fart tornado S of Hill City, KS shortly after 9pm that we pretty much drove through. It was super weak though....and I wouldn't believe it was a tornado except several notable chasers had reported it including Jeff P. Overall a disappointing chase, but I've had worse. You can't win if you don't play.

The only thing I'd done differently is gone after those mid-day storms near Hays, but then again I didn't know the evening show would be pretty much non-existent lol. Here are some pics: 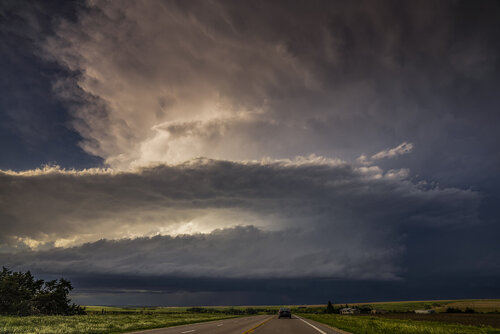 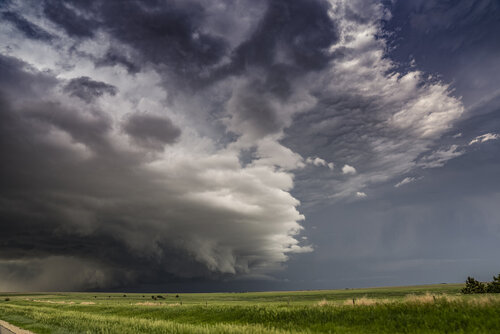 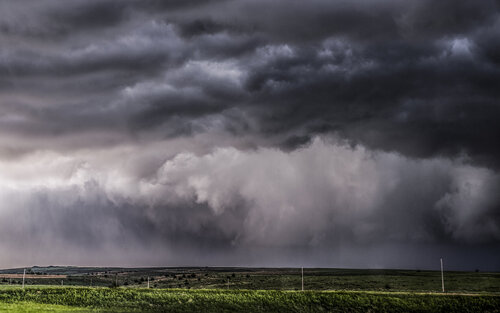 Suspicious area SE of McCook, NE around 6:30pm. I didn't have radar for a long time, so no idea if this was a tornado, but the meso that came out of it crossed in front of me and was violently rotating. I thought we were about to get a huge tornado there for a bit. 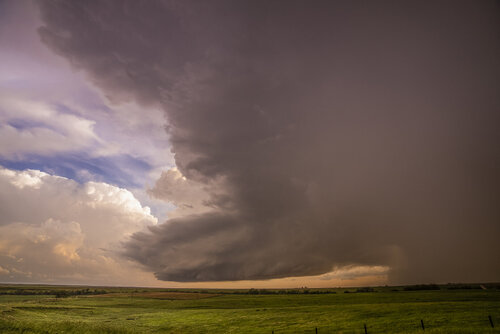 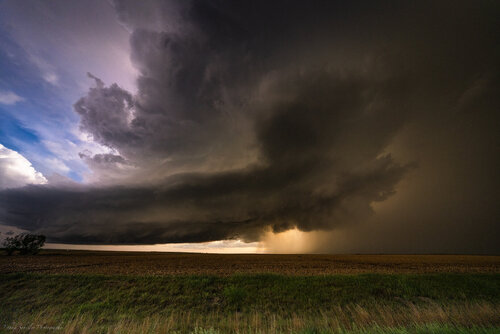 Another supercell thunderstorm near Lenora, KS at sunset 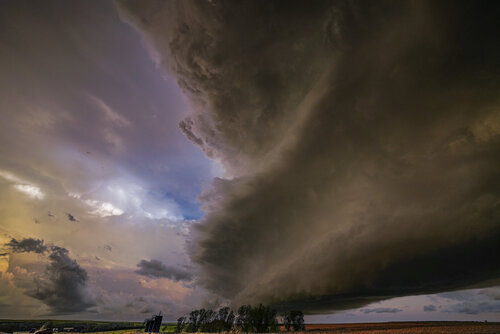 Supercell coming over me near Lenora, KS. I didn't get photos of the Hill City storm but I did get about 20 minutes of tripoded video of a large wall cloud SE of Hill City with spiraling rain curtains and some suspicious looking activity under it around 9:30pm. Will have to view that later. Onward and southward...
Reactions: Jeff Duda, Randy Jennings, Heath Powell and 8 others

It looked like the majority of us were expecting something big from Colby to Garden City, and unfortunately that didn't pan out. I sat in Scott City for hours waiting, and then went after the storm that popped up in Leoti. Immediately didn't like the look of it, and while others stayed with/south of it, I actually went ahead up to Russell Springs to get north of it. By the time I got up to Oakley, it was dying, and there were several little junky cells forming. At this point I thought about trying to make it up to the tornadic cell in Nebraska, but figured it was too late. Saw one cell I thought might have a chance, and caught up to it near Hoxie, KS, but it was high based, and didn't look promising. I then decided I WOULD try to race north to make it to that Nebraska cell, thinking maybe as the LLJ picked up toward sunset it could squeeze out one more tornado. On the way, however, it seemed to cross the boundary and began dissipating.

The storm I had just passed went tornado warned, so I dropped south to Lenora. When I got a view of it, it was clearly still elevated. But it was pretty, so I took some pictures, then started to drop south as junky development all around looked like it would choke it off.

Then suddenly all of these cells exploded right around sunset! So I hung around just south of Lenora snapping pics of this same cell as it gained strength. It went severe warned again, but there was never anything tornadic. As it got dark, I dropped further south to Hill City to keep an eye on the approaching cell, which displayed some signs of rotation on radar, but not that I could tell visually. Called it a night after that storm passed. 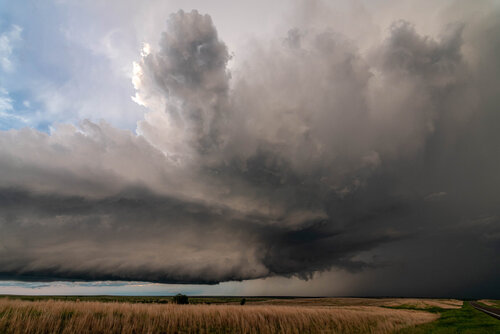 I got as far northeast as Meade, but backtracked when the storm fired in the far northern TX panhandle south of Guymon, OK. Missed the first tornado but caught this brief but photogenic rope tornado northwest of Farnsworth, TX. Full report to come as time permits. 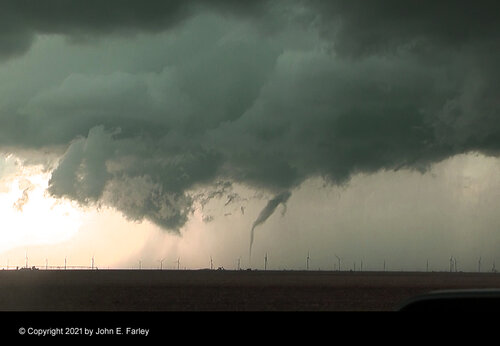 I did not feel strong about the southern target down south of Colby the night before, based upon multiple CAMs being schizophrenic with initiation, and no model agreement on the short wave timing or available shear. Still, morning of I hedged my bets for two options north and south and one back west, and drove to Idalia, CO. From there I could either wait for the HRRR wishcast storm allegedly later coming east from Brush area if it happend, jump anything that came up over Goodland to the panhandle, etc. If I really had to, if KS further south went off big perhaps I could make it to a storm down there, especially if initiation went north to south as expected. I practically never broadcast or view spotter network so am never really influenced by how many people are betting on one target or another; I tend to bust or succeed in a vaccum of my own thinking. Still I was surprised how few chasers seemed to be out in NE as it felt like the data available by mid afternoon supported that choice best.

While in Idalia, I checked out surface observations again. There was a markedly better environment in the NE panhandle by 2PM than south into KS or west in far eastern CO. Colorado was covered by intermittent stratus and large T-Td spreads. It started to feel certain to me that KS was not going to initiate substantially for a long while if at all, and CO. would not initiate anything robust as suggested by CAMs. The timing/position of the low moving from WY, as well as the shortwave seemed off from popular forecasts as well.

RAP showed intense moisture convergence pooled right about St. Francis and to thw SW, with vis. sattellite pointing the CU field agitation on that same axis, SW to NE. So now, with enough info collected to convince myself of my final target, I prepared to leave Idalia for St. Francis. Foolishly I had not stopped for fuel since Denver and took the scenic route on 36, so I had to decide to start the chase on half tank in an area with bad roads and fuel options, or jog up to Wray and back hoping to beat initiation. I took the chance to fuel at Wray, noting a tiny messy cell over the Goodland radar just as I reached the gas station (I have got to stop forgetting how bad radar visibility is when storms cross that area)

As soon as I came out of the gas station I could see that a classic rotating tower had exploded out of that tiny cell and I started heading to it ASAP direct from Wray. Thankfully the storm was not going too fast for once. I missed out on about 10-15 minutes of tornado on the ground, but at least caught up and enjoyed a good 20-25 minutes. Road options were bad, and power lines blocked 61, which I would have been ahead of if not for the fuel stop. Had some harrowing mud road sliding for a couple miles before back to the pavement.

For me this was the best chase in the last two years. I am adequate selecting the right targets but with coming from other commitments or fatigue, am too often slightly late. Being early will be something to improve with better prep and discipline in the future; in years past I seemed to be better about this. Anyway, happy with the views I got, if a bit further back than desired. Also glad that as far as I know, no serious injuries or damage occurred from this storm.

View as I rolled up on the storm north of Binkelman. The tornado was in a beatiful thick rope / trunk shape before going back to stove pipe. 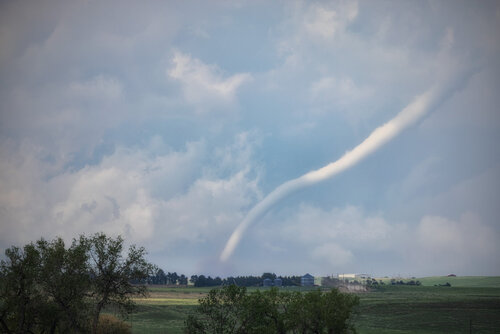 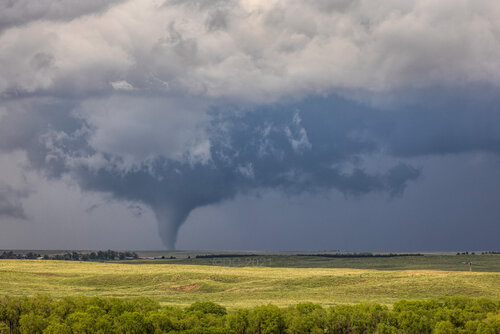 Stove pipe went slight multiple vortice after this shot, and then roped out. 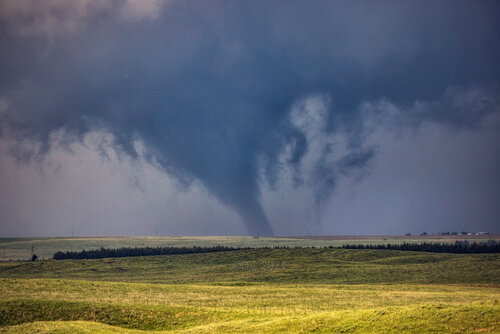 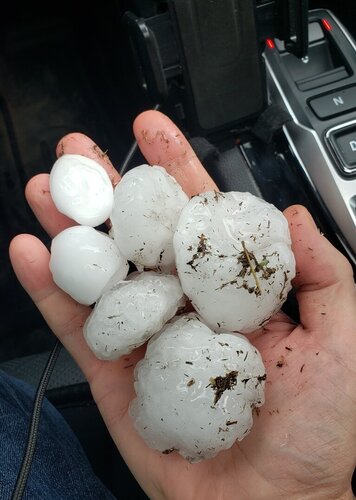 Chase route with rough tornado path. I didn't truly catch up to the storm until coming out of Benkelman on 61. Once forced onto the dirt by the downed power pole, since I was solo, there was no place to stop without getting stuck and I wasn't running GoPros this day. As such I missed photographing the anemic ropeout with partial rainbow; no tornainbow for me. The dirt was awful, like driving on grease or driving a boat with no rudder, but it was that or chase over. All in all, this day made my season. 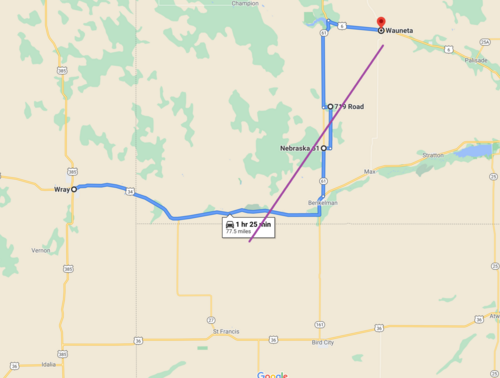 5-26-2021 north of Benkelman, NE. These are quick edits.
Storm went from a little bit of thunder and lightning with a 30K top to a rotating behemoth at 50K top in just 10-15 minutes and was unofficially on the ground around 20 minutes.
This is one of three tornadoes spotted one after the other.
I watched it snap off many power poles both along the road and to my west.
I have some great multi-vortex video I'll try and upload. 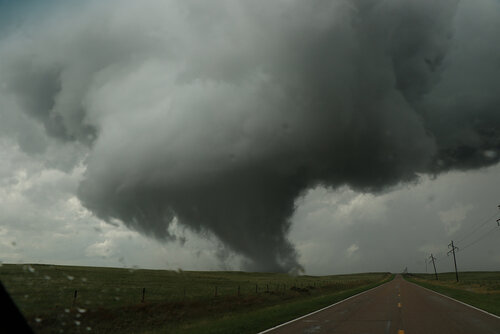 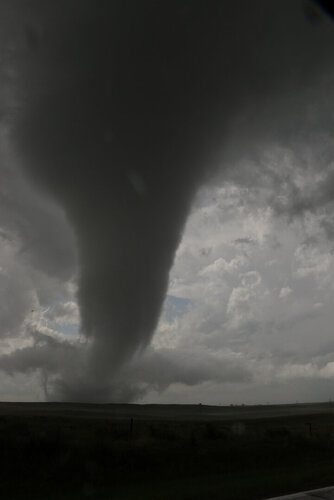 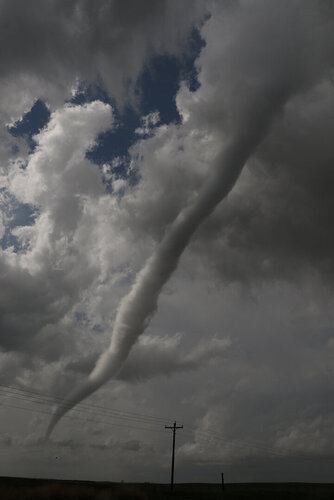 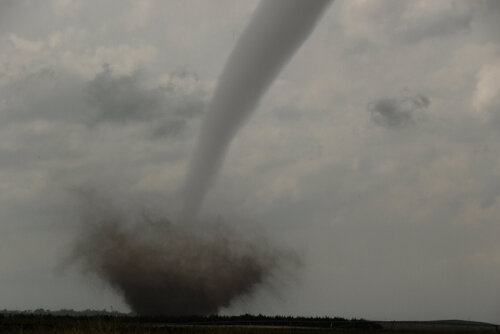 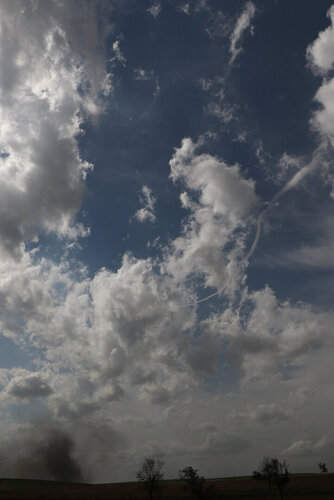 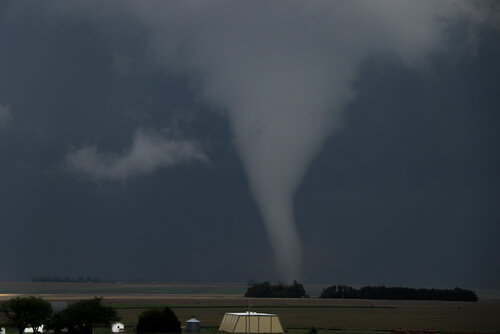 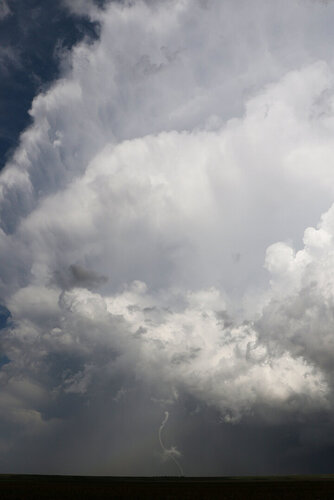 Here's a clip from video I shot of the Benkelman area storm.
Look for the powerline arc as the tornado begins snapping the poles on its periphery.

Like a hundred other chasers, I hung out in Scott City and went for the Leoti storm. It seemed like a good storm for 10 or 15 minutes but I eventually left it for the Nebraska storm. I got there just as it was losing the tornado warning, but was able to cut south to a tornado warned storm near Lenora. This beauty was right behind it, and was able to maintain its identity long enough for several chasers to get some structure shots. 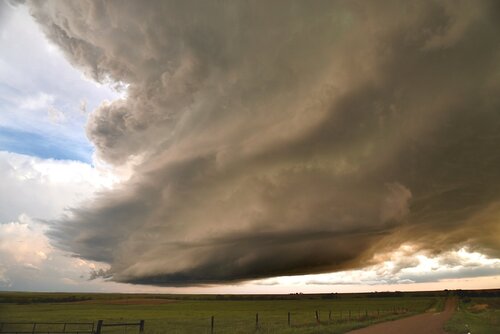 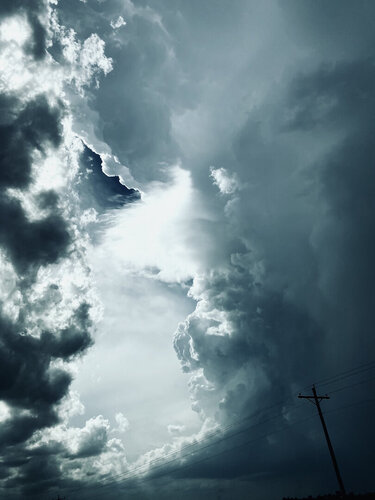 I have now completed my write-up of my chase in the far northern Texas Panhandle on this day. Turns out I got two tornadoes, the one I posted the picture of above, and another that caused minor damage in Perryton. Although I was looking right at it, I did not realize this was a tornado, because the condensation funnel was largely hidden by the wall cloud and surrounding scud - although I did at one point think there was a funnel in there and said so on the video - but the condensation did not reach to the ground or even much below the admittedly rather low wall cloud, so I did not think tornado at the time.. But reviewing my video after the NWS posted its Public Information Statement on the tornado's damage path, I can see a couple times when the condensation funnel does seem to be pretty visible, as in this one: 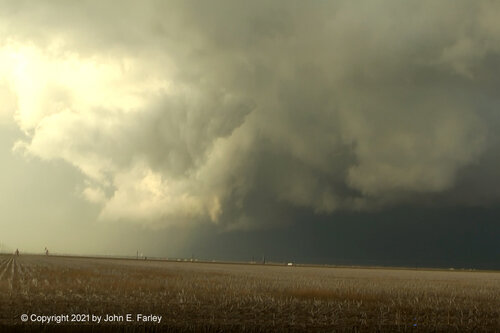 Just to the left of center, you can see what I believe is the funnel emerging from the base of the parent cloud at the top of the wall cloud, extending downward in an S-curve. This is about the most unobstructed view I got; much of the rest of the time the view was largely obscured by surrounding clouds. So I got two tornadoes, even though I was not very sure about the second one at the time. Also some nice video of dust being lofted in the air by intense RFD winds. My full chase report, with more than a dozen pictures and three video clips, can be seen at: