Today certainly over performed from what I was expecting. We started out targeting a couple of cells that went up near Tribune and moved towards Scott City. When it became clear that the cell was well south of the boundary we tracked north up 83 to Colby.

A couple of discrete cells started producing brief tornadoes near Gem, so we stayed on the storm since it was obviously interacting the boundary with generous 0-3 km CAPE. The storm finally started cranking up right before 0z and ended up entering the town of Selden, crossing the road several times right in front of us in close proximity.

We ended the chase about a mile east of Selden when we came upon a semi driver that was overturned. Once we help to get him out of the cab it was discovered that he had no injuries, but at that point I had had enough. 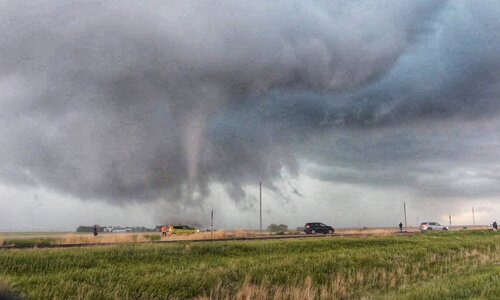 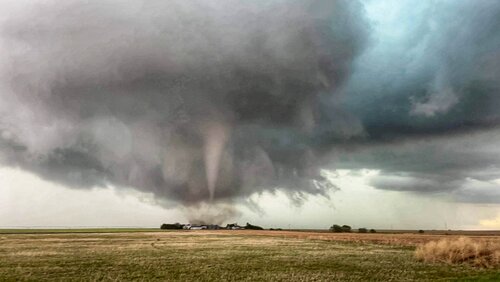 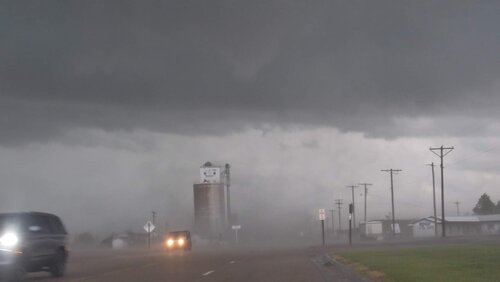 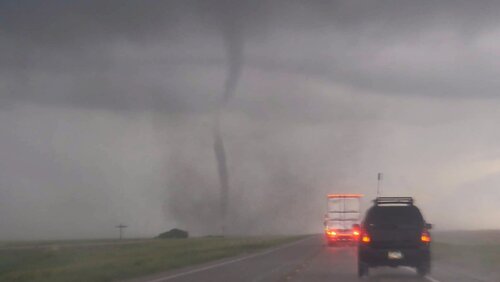 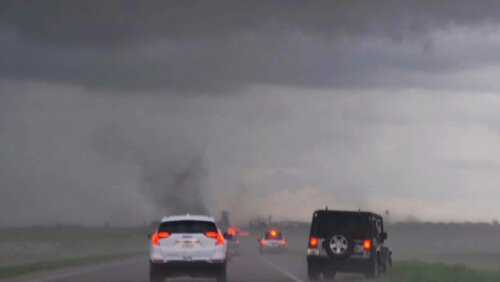 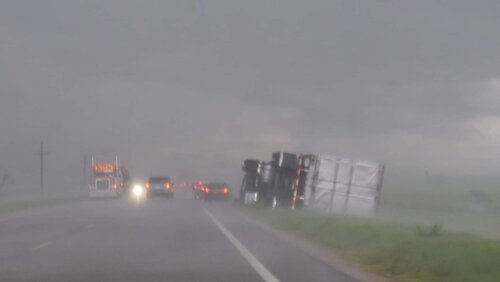 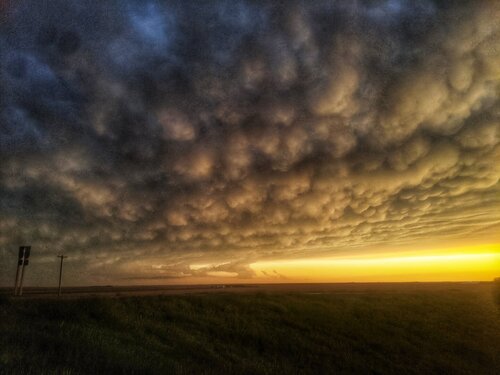 Overperformed indeed! After the excitement of the previous few days in Colorado we kicked around the idea of taking the day off. But we woke up in Colby and the outflow boundary was nearby, so we checked out late, had a leisurely lunch and then started following that cell. We sat on it for a few hours near Rexford and then busted east of Selden once it went nuts. I've seen some pictures of the destruction. Hopefully, no fatalities.

The pictures below were taken east of Selden looking west.

I made probably the most bone-headed decision of my 12 years of chasing, opting to leave that storm in Gem and drop way south to Garden City. Not really sure what I was thinking. There was a moment where it looked like outflow had taken over, and it started to look junky on radar, and like it was back-building and turning linear... but clearly it wasn't. I'll be kicking myself over that one forever! As a consolation, the Garden City storm was beautiful. 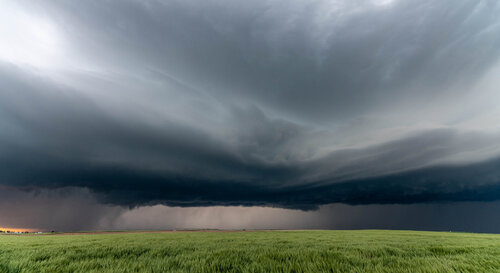 MODS: May want to change this thread title to Reports? I was going to create one, but saw that the posts here were more Reports-related so wanted to keep everything together.

I would put Selden 5/24/21 in my top 3 career chases and it was probably my closest proximity to a tornado. The day did not begin well. I targeted the outflow boundary which at the time was near Leoti, and my GPS failed to tell me to turn left off 40 onto 25. It tried to send me on numerous dirt roads after that, but they were all a bit muddy and I wanted to avoid them. I went all the way to Sharon Springs, got gas, checked radar, and saw that storms were already forming in a line that extended south, with the northern cell just east of Leoti. My options were to drop south to Tribune and east from there, to the south of the northern severe-warned cell, but that would have meant core punching the cells to its south. The storms were already east of 25, so I backtracked on 40 all the way to Oakley and 83, which was the next south road. This seemed futile, as the road network really sucks in that area.

Suddenly I noticed the tiniest tornado warning polygon ever, on a cell back near Winona, where I had just come from. The polygon was so small because the storm was stationary. I couldn't believe there were three or four tornado reports on this thing, as the storm looked like nothing at all. One report specifically said "landspout," but I suspect they all were.

There was no way to intercept the storm as there were only dirt roads heading north and they were already encroached by precip. I watched the storm from 40 and planned to head up 25 toward I-70 once the storm moved in that direction, but it was very slow moving.

This storm weakened and then I noticed the cell near Colby with a tornado warning. I went north up 25, east on 24, and up the perfectly-oriented SW-NE 83 from Rexford to Selden. The relative position of the storm to the road, and the path of the storm relative to the road, could not have been better. The action started with a touchdown around 6pm, and a later touchdown crossed the road and had multiple vortices although not a fully-condensed funnel at that point. Crawled along on 83, past some debris in the road, a destroyed grain container, and saw a tipped over rail car on my video but did not notice it at the time. Saw the same toppled tractor trailer that Jesse photographed; pretty sure that had to be one of the two foolish truck drivers I saw continuing to plow ahead without regard to the tornado (and the RFD).

Wish I had immediately gotten ahead of the tornado instead of having to cut back through the RFD once or twice to stay with it as it tracked northeast, but you know how it is, when that touchdown occurs you want to watch it and not be repositioning; and there were so many chasers I was worried I wouldn't find another spot to pull off. Around 6:30pm the storm had encroached onto the road and I didn't feel it was safe to slice the hook again and continue on the northeast road, so I dipped south to 23 and went east. I tried to go north again to Dresden, but the hail core was already over the town. I decided to just bail out, as the only option was route 9 that continued east for too long with no north option until 283. In retrospect this may have been a bad decision, as the storm turned east and probably stayed north of route 9, but it looked HP by then anyway. I had success and there was no reason to push my luck.

Spent the night in Colby and was treated to a surprise mammatus show after dinner, associated with the southern storms near GCK.

Took mostly video but too lengthy to upload from my iPhone as-is and don't feel like editing right now. Wish I had more time to use my DSLR for pics and video, but iPhone was much easier to use one-handed while crawling along the road following the tornado.

What a crazy day. I can only sum it up in my video.


Had another chaser U turn in front of me and wasn't able to avoid him. Was still able to chase and limp the car home. What a day. Top 5 chase I think, and another notch into the May 24th is awesome belt
Reactions: Caleb O., Verne Carlson, Michael Towers and 3 others

There is a Go Fund Me page for Selden tornado relief. I would encourage anyone that chased that storm - or any storm chasers - to donate. On this evening of May 24th, Selden was hit by a tornado. Damage was done throughout the town t… Jennifer Mackley needs your support for Selden Tornado Relief

Started this day in Leoti like most chasers. Once that storm fired we began chasing down a few dirt roads. Big mistake. Ended up stuck in the mud for about an hour while waiting on a 200$ tow. During that time I noticed the Leoti storm getting messy and lining out quick. I also noticed the boundary continuing north with a discrete cell firing up in NW Kansas. Once free from the mud we began blasting north, catching up with the first tornado producer near Brewster/Winona. Witnessed three different brief touchdowns from that storm before bailing to the new cell at Colby. Witnessed a brief rope tornado outside of town, then began heading towards Rexford.

We were very close to bailing south as the storm began to look OFD. It would continue to cycle several wall clouds so we stuck with it. And I'm sure glad we did. A few miles west of Seldon a small tornado began forming before transitioning into a large multivortex. This tornado would take several different shapes and sizes before transitioning into a rain wrapped mess inside the town of Seldon. We were cutoff inside the town by a very angry sheriff who went off on several chasers in front of us. Going as far as to put his hand on his gun out of frustration.

At that point we ended the chase. The tornado dissipated shortly thereafter. A day from being stuck in the mud with all hope seemingly lost to witnessing roughly 7 tornadoes. Best chase of our trip, and I'm fortunate we had the patience to stick with the storm even as many chasers started to bail south. 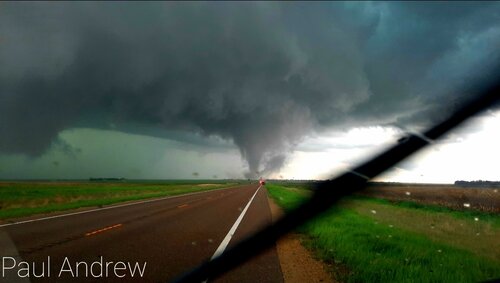 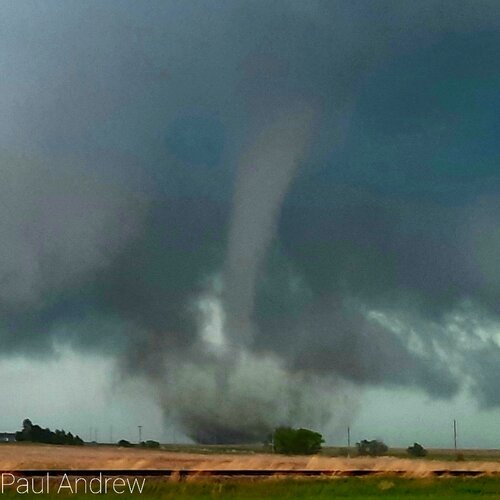