Caught a local chase Sunday after work. Headed to Limon and went up 71 N to Last Chance. Encountered an HP mess that went linear. Bugged out east to Burlington to wait on more discrete cells developing to the SW. These storms too turned into a linear HP mess and the chase was called. Needless to say the chase was a bust for tornadoes despite 6 others being seen in Colorado during the course of the day.

However, it wasn’t a total loss as the drive home included core punching the line and then I was rewarded with the best Mammatus show I have ever seen. Colorado is such an amazing, mystical, magical place. I sat in awe on an off ramp and watched this for an hour in Arriba as the sun dropped below the horizon and daylight faded away. Colorado never ceases to amaze me. You may not always get a tornado, but you will get something from every chase here. 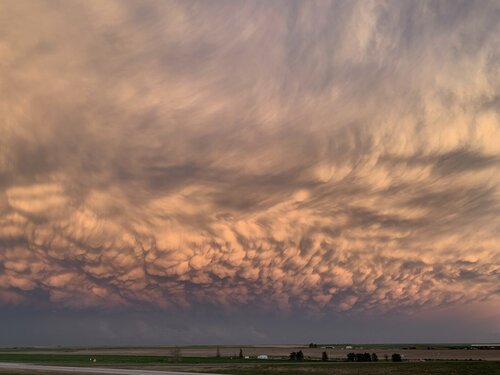 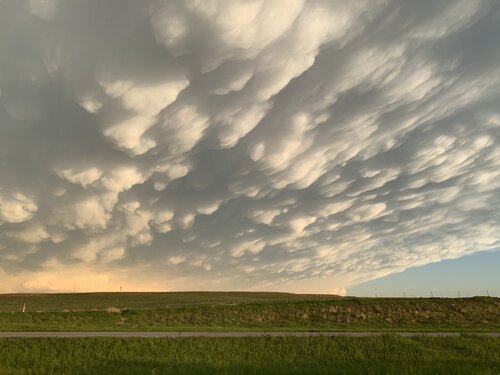 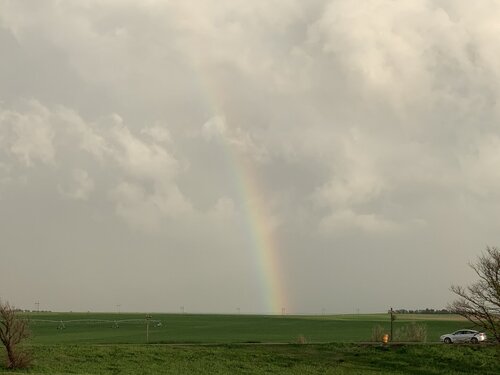 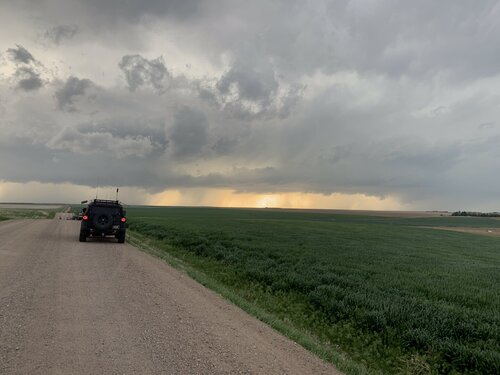 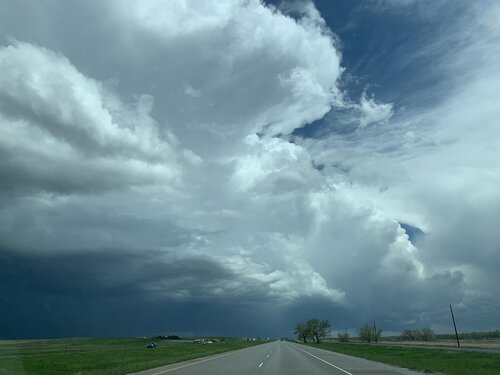 After arriving in Denver on Saturday night, 5/23 was the first chase of my chasecation and first chase since 2019. Let’s just say I hope I can blame my poor performance on shaking the rust off and hope it gets better from here on out, weather permitting.

My initial target was Joes CO but I stopped at Cope which still turned out to be a bit too far east. For whatever reason I failed to have a proper sense of urgency about the cell coming up from the southwest toward Last Chance and thought it would take more time to mature/develop as it moved northeast, where I would be able to intercept from the south once it approached my longitude. I was caught napping (figuratively, not literally) when it went TOR warned and so I raced back west to Anton and north toward Akron from there.

There is a tweet on Twitter of a large tornado said to be at 2:40 MDT somewhere between Woodrow and Akron but the SPC report for a similar location is closer to 3pm. In any case you can see below where I was at 2:42, still playing catch-up. I have an image saved from 2:46 where the tornado warning was no longer in effect and it was just severe, but by 3pm it was TOR warned again and that’s when it looked best on radar (see 2:59 image below). (Sorry for douplicates on the radar images, I can’t figure out how to delete one without deleting both and can’t easily reinsert in the proper sequence, especially on an iPad).

The storm pics below are just before and after that radar image and were the only time I had a view of the base. These are all iPhone pics. I do have a picture on my DLSR that I have not yet had a chance to download, but it may have captured a dissipating tornado with a condensation funnel that was not all the way down to the ground.

By the time I got to Akron, continuing north did not seem like a safe choice, see radar image below, so I went east to Otis and north from there. By then the storm was clearly HP (see pic below from this time) and I was hopelessly behind. I went through some heavy precip and small hail as the road curved northwest behind it to Sterling and I was pretty much done.

Went to Ogallala for the night. There was no great structure to be seen from outside the storm but I did get to enjoy being run over by it at the hotel in Ogallala and then was treated to a great full rainbow when I finished one of the excellent burgers at the Open Range Grill in Ogallala. 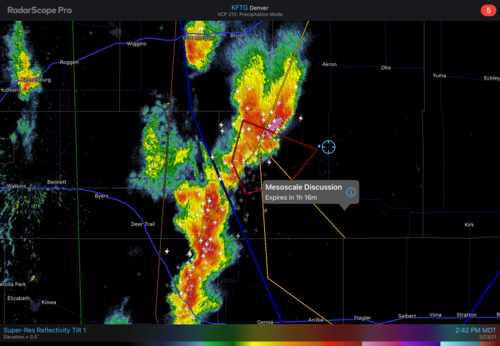 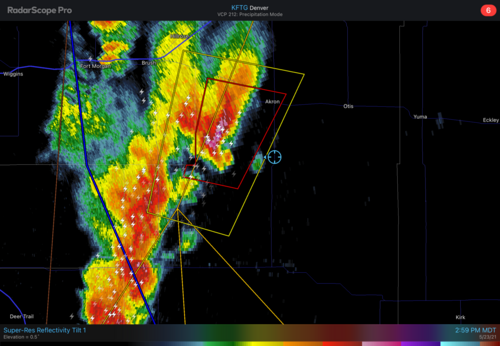 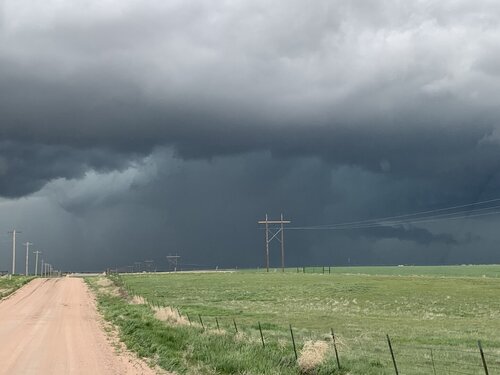 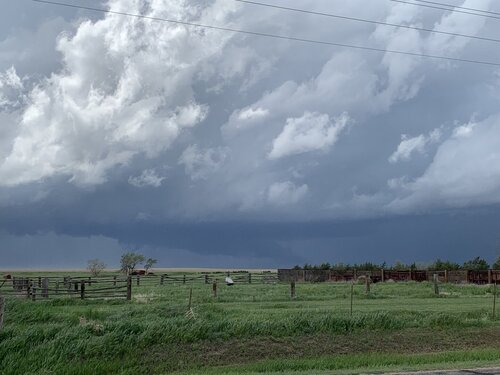 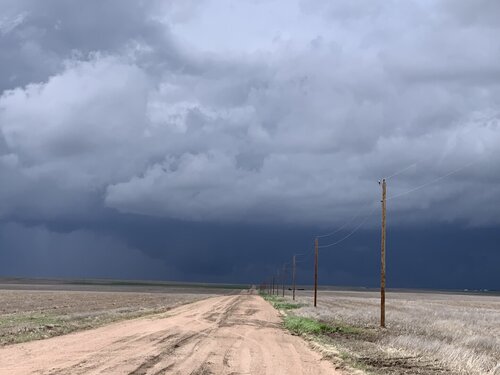 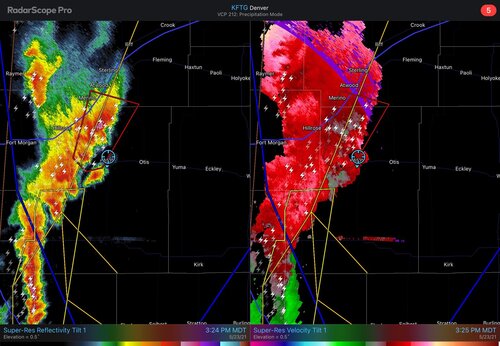 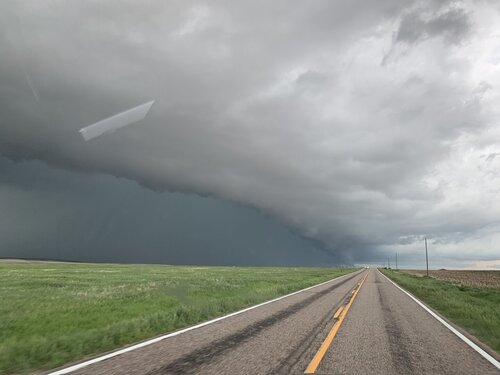 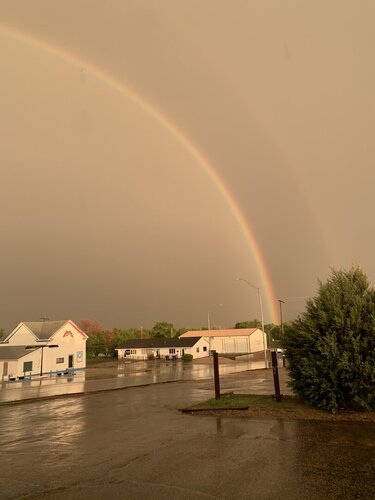 May 23rd started off with a good rest and freshening up in Wray, Colorado. I headed west toward Limon to catch the first in a couple rounds of anticipated storms that day. I was running late though and approaching Limon just as the first tornado warned storm of the day was sweeping past on its way north.

I considered flanking the storm northward on Route 71, but was concerned that positioning for the notch could wind up running me off into untested roads and that hanging south could leave me gazing mushwise into the back of the storm and never able to cut back ahead. So I headed east to Genoa and took County Road 31 north in hopes of using that as my flanking route.

The road was great. Until it wasn’t. About 13 miles north, I stopped short to see a couple chaser vehicles delicately trying to turn around on the slick surface of a portion of the road that had seen a lot of recent rain.

I tried another option on CR3S to get east then get back north but that wound up sketchy too and figured at that point I was probably not going to keep pace or catch up with that lead cell. Looking back at the storm’s path, slow movement and other chaser angles, I could have used Route 71 to keep with it, but didn’t know at the time it wouldn’t press eastward more.

I set myself back up on the less messy legs to the west of CR31 and watched for new development south of the original storm. For a while, I cruised around on CR3N, 28 and 3R watching the back building line dress up the wind turbine fields. The wind pressing into the boundary and forcing up the storms was fierce and I had to be careful every time I opened car door to be sure it didn’t get ripped out of my hands or crash into some part of me or my gear. 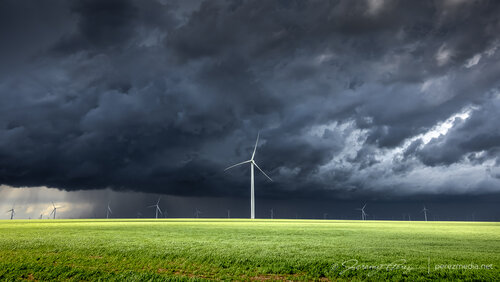 Turbines and green fields contrasting against the line of storms. 2113Z 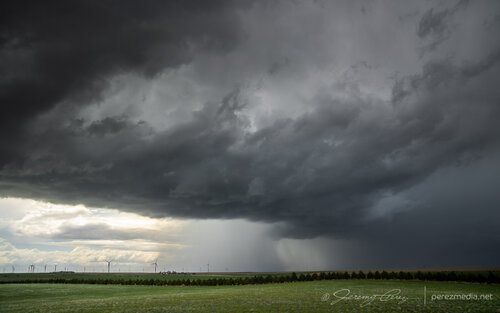 Some organization taking shape in part of the line. 2143Z

Around this time, as the boundary and line of storms continued advancing slowly eastward, a new batch of cells were popping to the south and a bit east of the boundary. So I cruised south to get back to I-70 to hedge bets on both of them and reposition faster.

As I got down to Genoa, a new area of organization nudged into the line. I watched it and grabbed some shots, but as expected nothing materialized as it filled in with precipitation and moved off to the north. I should have taken this as a hint of more serious opportunities in the making with the tail end of that line. But at the time, I figured I was still mostly in landscape & moody sky mode.

I hustled east to Flagler to gain some ground and be ready for developments to the south. I set up about a mile south on CR5 and watched ongoing development and crepuscular rays drifting across the bubbling towers. 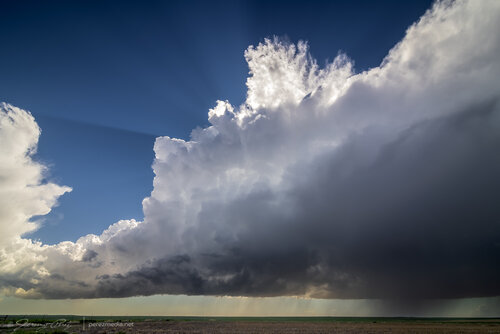 Tail end of convection on the boundary as crepuscular rays filter across. Funnel, unnoticed at the time, barely visible just left of center. 2241Z

At 2241Z, I was just beginning to drive off for another vantage, when the tip of a funnel caught my eye. I quickly pulled back into my spot, grabbed the still and video cameras and hopped out to capture it before it disappeared. The wind was still fighting me every step of the way. As soon as I released grip on my tripod mounted video camera to fire off a couple still shots, it got toppled. I hadn’t extended the legs yet and so it didn’t fall far, but still a few anxious seconds being sure nothing was damaged.

Quick first shot of the funnel as my video camera was toppling over. 2243Z.

After extending the legs and then bracing it against my body, I got the video started and went back to alternating between stills and re-framing video. Meanwhile, the funnel had thickened up and had my hopes up that it might fully condense. It never took things that far, but was a gorgeous sight as it drifted into dappled sunlight and glowed brilliantly from behind. It showed off for about six minutes before rain started to fall and I jumped back into the car. It went on for another couple minutes before receding as that notch in the line continued northward. 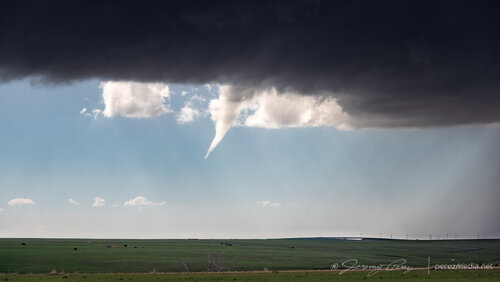 I filed a spotter report for a funnel with no ground contact visible from my vantage due to poor contrast and intervening terrain. Later on however, a video surfaced on Twitter from Paul Smith/@PaulMSmithPhoto showing ground circulation from his vantage in Arriba:


https://twitter.com/i/web/status/1397038858265579521
I went back to my footage and stills with strong contrast edits and found frames that showed the dust plume at 22:45Z. I passed that along to the Goodland WFO and got a confirmation response from them. So I'm keeping an eye on the Severe Event Database — which hasn't been updated for the May 2021 timeframe yet.

I had some time to enjoy that moment as I drifted further east on I70 and storms along and ahead of the boundary to the south started to get stronger. I lingered around Stratton and grabbed more shots of those as they moved in.

By 0000Z, the storms to the south were getting serious enough that I wanted to get in a good spot to surf them as they piled in. I headed north on SR57 and then east to Idalia where I had a great view of a cluster of multiple rotating updrafts moving in as the sun was starting to drop behind them. The glow through the precipitation cores was stunning and even though I wasn’t watching an isolated supercell, I was still captivated by the beauty and ominous quality of this gang of marching storms.

Hanging out east of Idalia, Colorado as multiple cores stake their claims in the line. 0053Z

I continued to surf this scene east into Kansas along Highway 36 stopping at various points along the way to take in the heft of it. As the sun set, the brilliant yellow-orange glow set the cores on fire and went from one kind of spectacular to another. 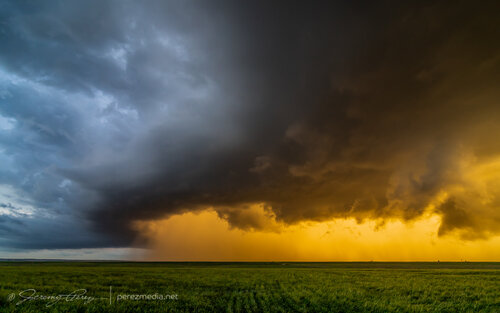 I wanted to pause briefly in St. Francis to watch one of the cells move in, but the line to the south began to surge quickly and I had to keep moving out of the way. A quick check of radar showed an ominous hook develop just as the storm moved past the town. Fortunately only some straight line wind damage was later reported there.

A few miles further east at Wheeler got me far enough to catch a breath and capture the whale’s mouth and lightning over grain silos and elevators. And then on from there, watching the gaping gust front flicker its way eastward. 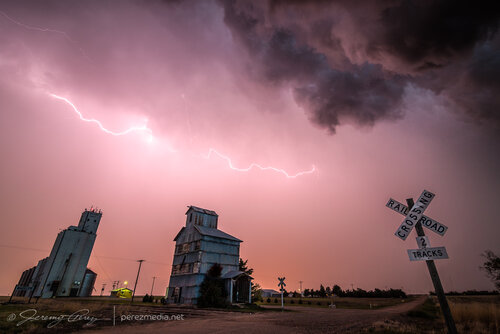 I finally let it go around 03Z near McDonald after about 8 hours of chasing. Despite some tactical goofs early on, this turned out to be a prolific and awesome chase day.