I started in Burlington. Colorado. Forecast models showed possible storms forming along the dryline and over the mountains in Colorado. There was a chance that some may become severe. The biggest issues were marginal moisture and low upper level winds. I met up with Chris and Alethea and decided to target Brush, Colorado which is just west of Ft. Morgan. We headed west on I-70. North of the town of Last Chance, we could see some isolated development. This was the only storm development in the region. We headed north, and stopped on the southern side of the town to wait for the storms to approach. While waiting, we played with some friendly horses. As the developing storms approached, they died. More storms (basically rain showers) were forming to our north. The expected strengthening had not happened and it was getting late. With expected storm movement and potential targeting for today, we decided to book rooms in Sydney, Nebraska. We drove north, stopping to take pictures of interesting non severe storms over barren landscapes. At that time, we had basically decided the chase day was over. North of Fort Morgan, we stopped to say hello to several storm chasers that we knew. Meanwhile, the weak storms to our west were starting to look a bit more interesting. Lightning was increasing. We continued north. Suddenly, the sun came from behind the clouds revealing one of the most intense rainbows that I’ve seen. It was still pouring rain. We scrambled to find safe places to pull over and take photos. We watched the rainbow for a while. The storms had formed a line of supercells to our east. Just to our south was the strongest one and there were reports of massive hail. As it was moving away, we could safely approach the storm and check out the hail. We dropped south and could see hail scattered over the ground. Some had left miniature craters. I measured the biggest pieces at 3 inches. As expected, a few storm chasers who got too close were left with dented cars. The chase ended with a beautiful sunset. We drove to Sydney, Nebraska and stopped at Applebees, one of the few restaurants still open. They were overwhelmed with storm chasers and couldn’t seat us. We could only get take out. We chatted with a few chasers that we knew until the food was ready. 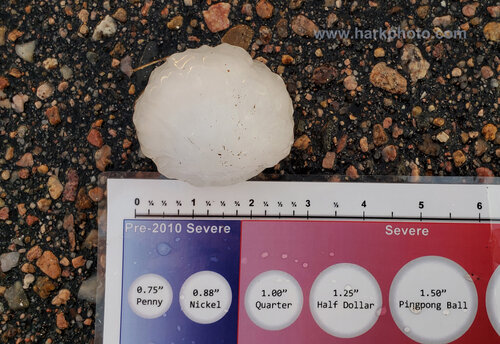 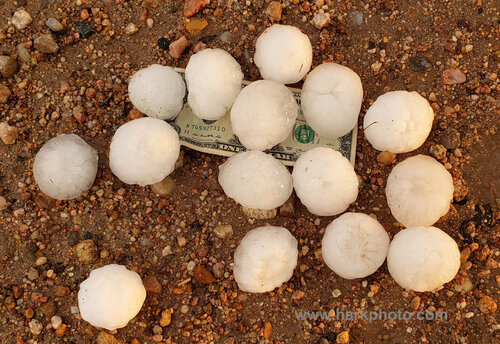 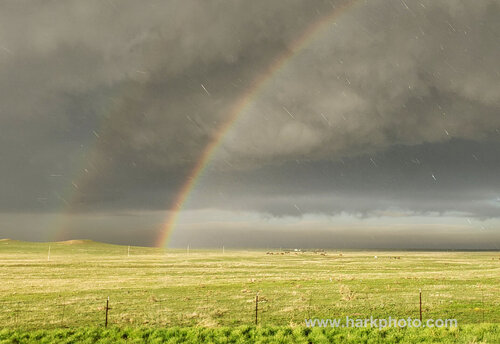