Day 1 of my chasecation turned out to be very hot. I was expecting a good setup, but not nearly as good as what I got, which was a little bit of everything. I targeted the Big Spring, TX area due to it's location near a remnant outflow boundary which intersected a dry line that was arcing NW back into New Mexico. I wasn't a fan of the lower moisture on either side of this so I decided to stick with the bubbling convection near and east of Big Spring near Stanton, TX. This went on for 90 minute to 2 hours before one cell took over and turned SE. We encountered VERY large hail south of Big Springs, TX approximately 3.5-4" in diameter. We watched 2 funnel clouds form, I was initially unsure of whether they touched down but I got confirmation from fellow chaser Evan Hatch that one indeed touch down about 3 miles to my SW near Elbow, TX! We made the move of driving S and then back to the N on another major highway (road network is bad here) and managed to intercept the storm right as it dropped a large white tornado near Sterling City, Texas. This was a very photogenic bright white tornado from our position and we attained excellent stills and video. This tornado appeared to lift with multiple vortex on the ground and a cone would condense every now and then. It either handed off to a new tornado or was a continuation of the long track tornado, but a very large tornado approached highway 163 and ended up impacting a gas plant. The nearby wind farm recorded a 112 mph wind gust I was informed by one of the employees in the RFD of the tornadic storm as the large tornado passed very nearby. We probably encountered close to 80-90 mph winds in the RFD before turning around. The day was capped off by incredible HP storm structure, mammatus, and a nice sunset.

Here are some stills I shot thoughout the day: 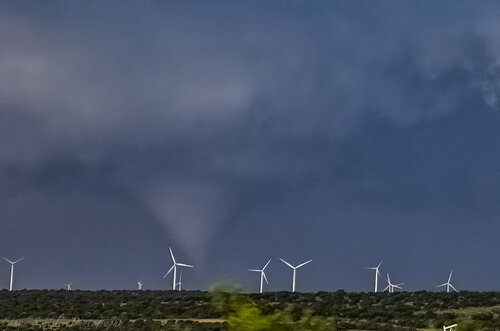 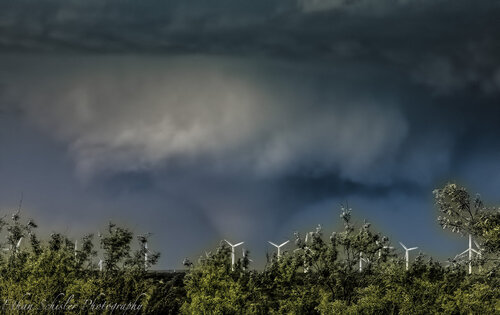 We managed to pull over and the tornado grew quite large almost reaching wedge status at one point before lifting. 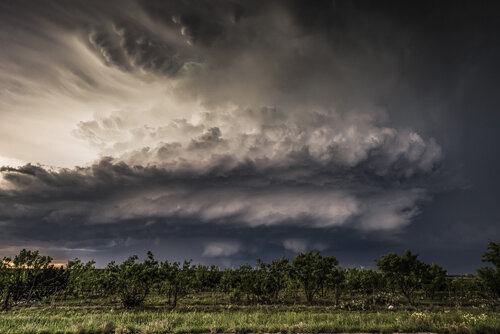 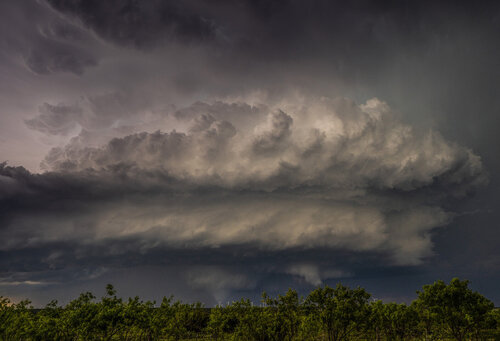 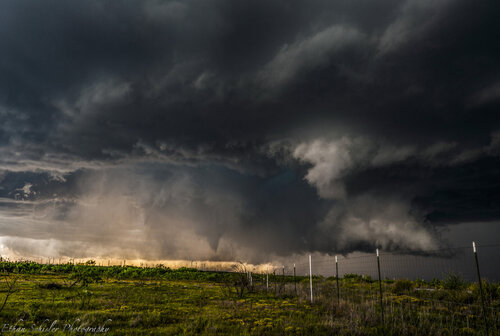 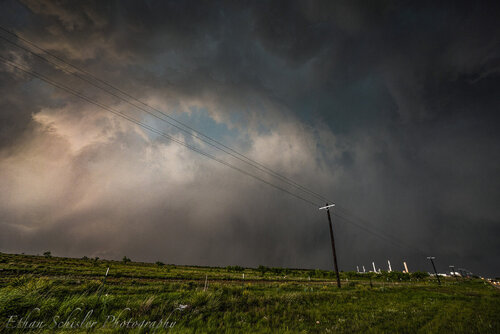 Very large tornado approaching highway 163 about to become shrouded in heavy rain/hail. We encountered extreme winds after this and bailed south. I'm not sure if this was the same tornado of just a continuation of a long track tornado that lasted nearly 55 minutes. Either way, it was quite an intense chase and I have quite a bit of photographic material to sort through.
Reactions: Brett Roberts, Dennis Duck, sdienst and 15 others

My first chase of 2021, and first since 2019, was characterized by a few critical mistakes and a lot of learning. My plan for the day was to leave Altus, OK and head SW to Paducah, TX. Once in Paducah I would decide whether to go ahead and push west a little further or move south to Guthrie. Either way, my plan was to wait for initiation and pick up the storms as they moved towards me.

I left Altus around 1pm, and followed my plan to Paducah, gassed up, and decided to move south to Guthrie. Mistake #1 was not sticking with my original plan, wasting time in Guthrie second guessing myself, and then finally deciding to head west on US 82 towards Lubbock. While in Guthrie, I noticed a cell getting going just SW of Spur and Gerard (SW of my position). My gut said to break off and stick with it, but I decided to continue pushing west, all the while second guessing (mistake #2). I was a few miles west of Dickens when the aforementioned cell went severe warned. I decided to stop my push west and double back. Initially I attempted to get SE to Girard, but the storm was really getting its act together and appeared (on radar) to already be pumping out some hefty hail near there. Not wanting to get caught in a potentially expensive situation, I cut back north to 82 once I got to Spur. At this point, another storm had kicked off east of my target storm. My plan was then to go east on 82 back to Guthrie, head south on 83 and basically shoot the gap between the 2 storms to get a better view. Well as I headed east, that gap continued to get smaller and smaller, and by the time I reached Guthrie, that gap was then occupied by yet another hail core. Again, not wanting to chance an encounter with hail bigger than what I'm comfortable with, I held in Guthrie for a bit and decided to push back north to Paducah. Just north of Guthrie, I stopped on a hill and snapped some long shots looking back to the south. The cell, now nearing Guthrie, split and so i made a move on the left split, which promptly dissipated. Another cell became warned west of Paducah, and then fizzled out as I was heading north to make a play. As if to add insult to injury, around this time the cell I had initially gone after went tornado warned. At this point I topped off again in Paducah and headed home.

While not a meteorologically successful chase, I did learn a lot about following my gut and second guessing/ hesitation in the heat of the chase. While following my gut would have still prevented me from seeing the structure/ tornadoes that other folks did, I would have at least been in position on a storm. I also got a chance to use my camera and tripod on a chase, both of which are new to me since my last chase in 2019. I'm off work until after Memorial Day, so hopefully some more opportunities will present themselves while I have the flexibility to chase, and I can apply what I learned yesterday. While not meteorologically significant, I uploaded a few of my favorite shots. All are looking SW towards the cell that was SW of Guthrie. 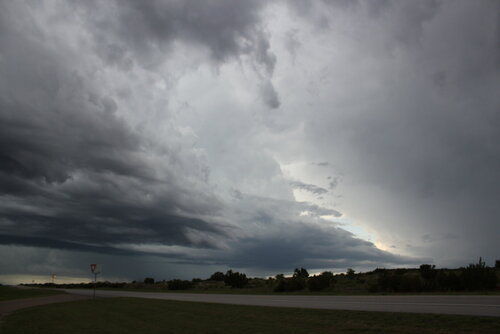 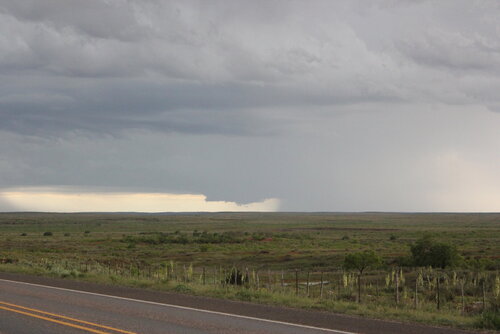 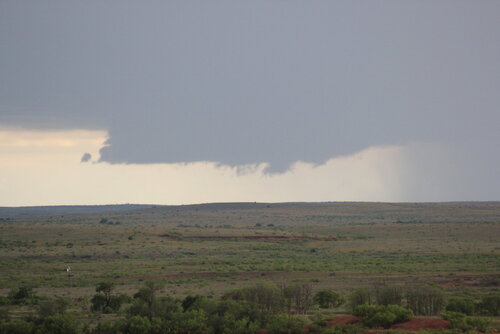 New here and interested in getting into chasing - mostly from a photography interest, but I was on the other side of that storm near Knox City, Texas... got a few of pictures. 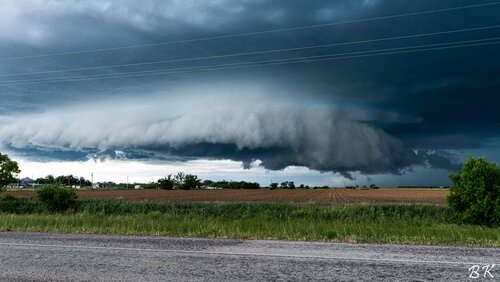 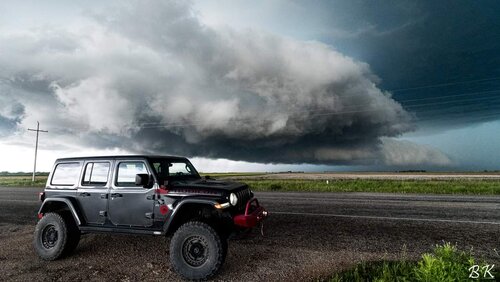 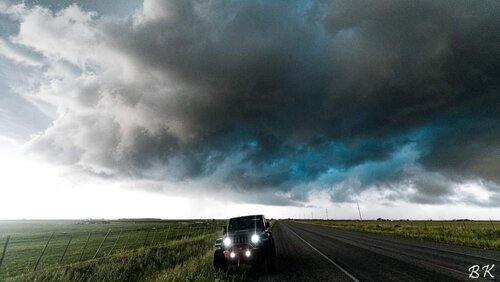 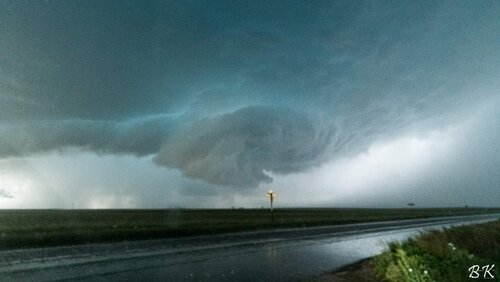 Monday, May 17th was an eventful chase. The Storm Prediction Center had issued an uncommon 10% percent tornado risk and an even greater risk of giant hail for a large area of western Texas. I started in Amarillo. After a careful study of forecast models and current conditions, there were two potential areas of enhanced risk. One was southwest of Lubbock and the other much further south in the Odessa-Midland area of Texas. I headed south, keeping in contact with a few of my friends who were also chasing. In Lamesa, southwest of Lubbock, I stopped and had a quick bite while looking at data. Storms would form along the dryline to the west, initially in two main areas of the target zone. They were expected to move eastward and eventually coalesce. Since the southern area would likely move into an area of poor road network, I decided on the closer region to my west. I drove west and was briefly delayed by roadwork. A long section of highway was only one lane and groups of vehicles would have to be guided by a very slow moving pilot car. This process took about 30 minutes to cover about two miles. Meanwhile, towering cumulus was forming to my west. It would be really bad if the main storm formed nearby and the only intercept route was back through the roadwork. I arrived in the town of Seminole, not far from the New Mexico border. A couple of isolated storms were developing right over the town. Other storms were to the north and a big cluster was also forming west of Odessa. Unlike many chase days, these storms were drifting slowly to the northeast and I could maneuver around them. One had a very nice updraft and base. This could be storm. I tracked it northeastward. Suddenly, it appeared sickly and died. Ughh. That wasn’t good. Meanwhile, there was a cluster of storms to the north. The southernmost one was somewhat isolated. I headed north to Brownfield, then west. It had an elevated base and was small. At times, it appeared to weaken, but as it moved eastward into richer moisture, the cloud based lowered. It was rotating. Although small, it had interesting structure. I stopped briefly to watch some scientists scan it with the DOW. With the storm’s slow movement, I could drive around and pick interesting foregrounds for pictures. I followed the storm eastward as it gradually strengthened. It was approaching Lubbock, Texas. The cloud motion was incredible as it corkscrewed into the sky. The whole storm was rotating. At times, the storm cast a massive shadow across the road. The lightning was constant. With the clear air near the dryline, the whole mesocyclone (the storm-scale rotating area) was visible. A funnel was visible and the storm became tornado-warned. For photography purposes, I was a bit too close as I didn’t have a wide enough lens to get the whole storm. Clouds of red dust streamed out ahead of the storm. On the backside of the storm, a beautiful white funnel formed. It almost reached the ground. I couldn’t confirm ground circulation. I followed the storm eastward with increasing traffic as we neared Lubbock. My photos don’t do it justice. I spent time just watching this amazing storm that became more beautiful as the setting sun illuminated the clouds. Finally, darkness arrived. I was hoping for some nice lightning but ended quickly. While sitting in the car on the side of the road considering hotel options, a passing car stirred up some dust and a speck of something hit me in the left eye. I tried flushing with some water, but still had the sensation of something in my eye. At that point, I heard from Jason Persoff who was out chasing with his son and Chris and Alethea. Everyone planned on meeting at a local restaurant that was still open. It was fun getting together with friends that I hadn’t seen in two years because of the pandemic. They had also been on that storm, but in different places, and we compared experiences and photos. It was very late when I finally got to bed. 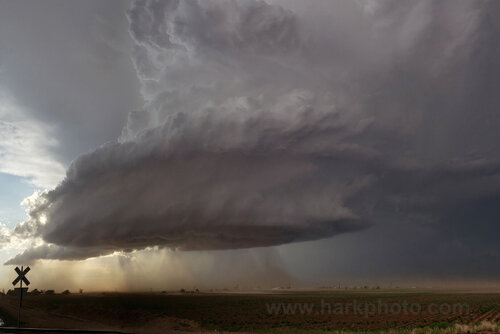 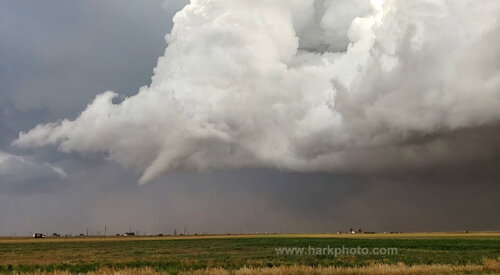