I opted to target just east of the Mississippi River along the surface warm front and east of the main surface cyclone. As the warm front lifted towards I-80 several rounds of convection occurred in the warm sector. Some late morning convection moved proximal to the warm front and may have laid down a boundary that later storms fed off of. An isolated cell formed south of Moline, IL along the eastern flanks of the MS River and tracked ENE near the front. It initially produced some good low-level convergence, rotation and brief funnels before getting interference from another cell as it tracked north of I-88. As I re-positioned north of Sterling-Rock Falls near a small town of Coletta, IL, I noticed an impending storm merger from the SSW. Within minutes after the two storms merged a large cone funnel appeared and then it produced a tornado for several minutes (1st photo). As the tornado lifted and the storm cycled, I re-positioned and caught a large fat white cone that was narrowing before it roped out (2nd and 3rd photos). I went north up into S WI as the warm front lifted north, but I wasn't able to confirm any more tornadoes with the ongoing storms. The storms occurred in a zone of rather favorable 0-3 km MLCAPE juxtaposed with a north moving surface warm front. 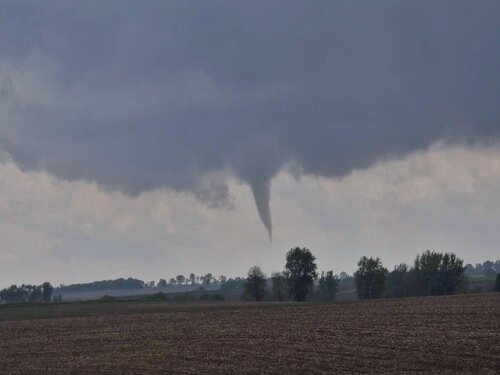 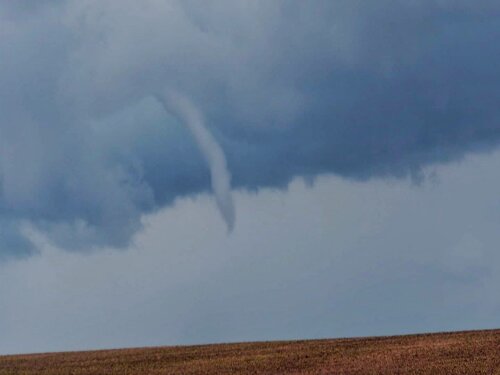 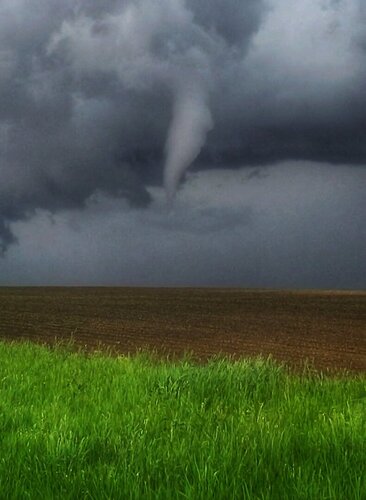 Chased Northwest Illinois yesterday and documented the life cycle of 2 fairly nice tornadoes and another supercell thunderstorm. The chase started out quite frustrating as a supercell that tracked from Orion, IL up to Erie, IL had troubles organizing in the low levels. Somewhere between Erie and Lyndon it produced a cone funnel that eventually got obscured by rain, I'm not sure if that touched down or not. That storm rapidly got disorganized as it pushed northeast of Lyndon, so we headed back southwest toward the QCA for another tornado warned storm. After a cell merger it would go onto produce 2 fairly photogenic tornadoes near Morrison and Coleta, IL. Watched the storm drift off into the distance near Forreston, IL before calling it a chase and was home by 6:30pm .

I liked the area in Northwest IL yesterday because of the high 0-3km CAPE and surface vorticity overlap along with the strongly backed winds in place from the warm front. Hindsight, I probably should have started out near Iowa City and could have seen more, or continued chasing toward Chicago, but alas such is chasing. Here are my photos from the chase: 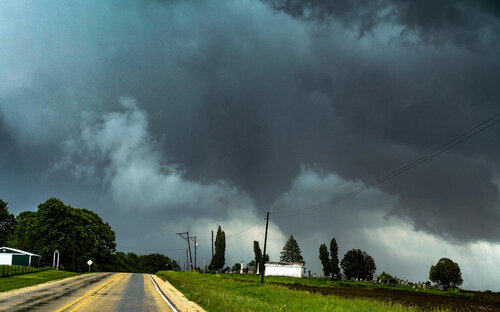 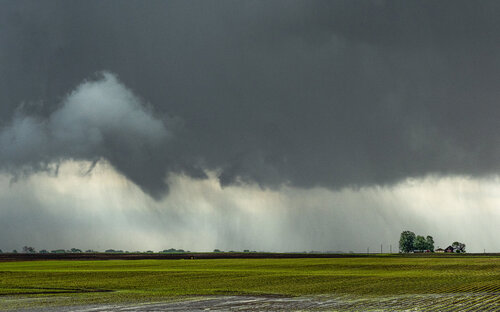 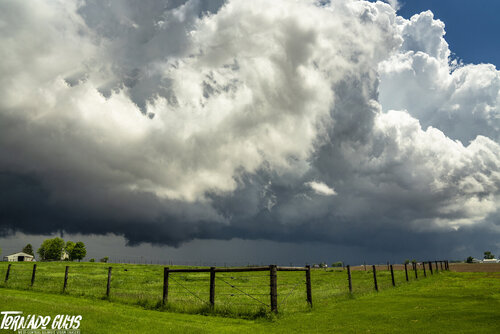 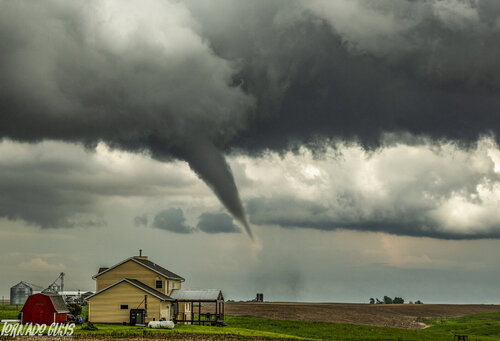 Tornado that lasted several minutes near Morrison, IL kicking up debris behind a farm house 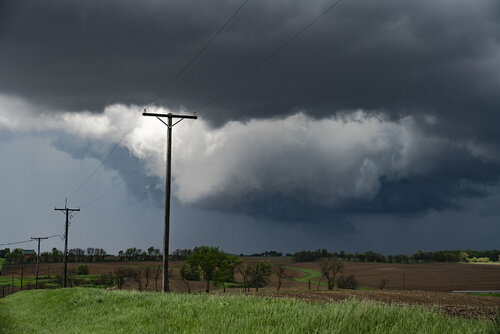 New mesocyclone forming near Coleta, IL which would soon pump out a new tornado 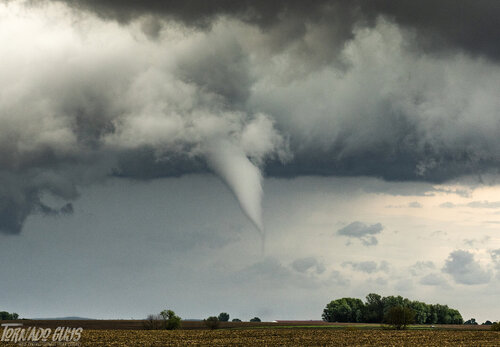 Tornado near Coleta, IL. This tornado started out as a fat cone while we were driving and then roped out producing some dust at the surface 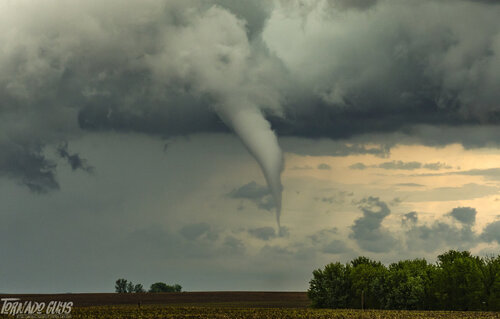 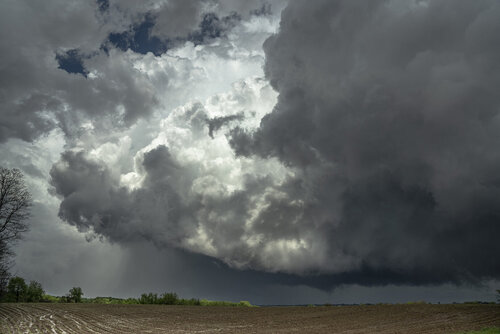 Wide angle supercell shot after the Coleta, IL tornado dissipated. New area of interest is on the right, but lacks any significant rotation. The storm would later drift off into Wisconsin not producing any additional tornadoes that I know of. Fun local chase and was able to get my girlfriend her first tornadoes as well which was exciting.
Reactions: Peter Nicholos, GPhillips, Paul Hadfield and 10 others

After seeing all the kick butt tornadoes I think why bother with this BUT it was part of the day so ...

After leaving KC at 11am to make Wichita Falls in time for storms the day before I could not make it to IA/IL so I hauled to Goodland KS. I had debated the SW KS ish target of the triple point as it seemed like storms HAD to fire there but I choose the CO target instead. I got to Goodland just as storms started and was under them until they both died. Not much to show but there were a couple landspouts and some ok structure. Congrats on the tornadoes everyone!!!!

PS ... I did get to stay the night at one of my favorite little hotels in KS. 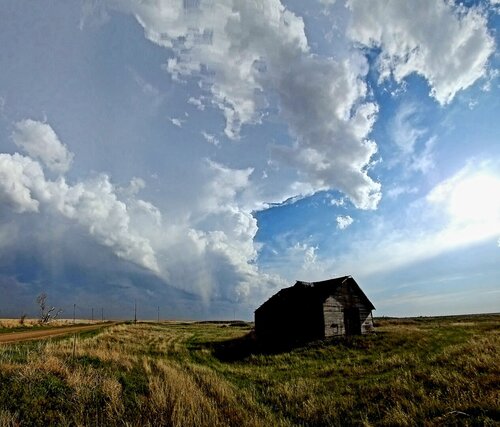 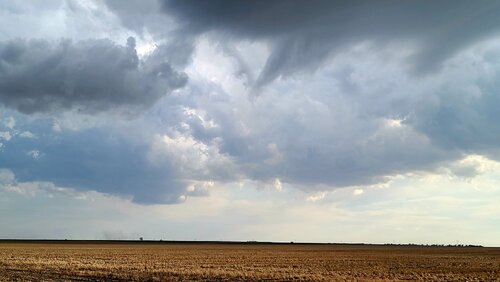 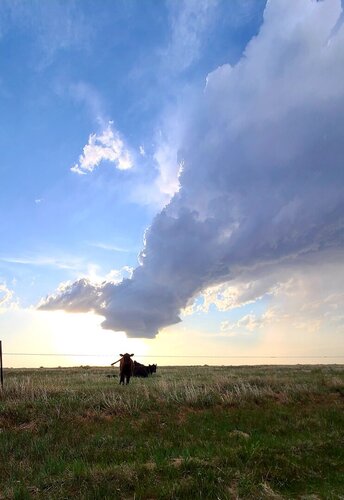 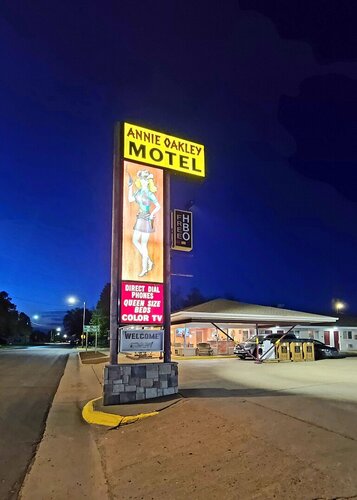 I may have seen my first tornado(s) yesterday in WI, near Beloit. I have several hours of dashcam video to scroll through. The trees/buildings and lack of discernable condensation funnels make it hard for me to say at this point if I did see it. But, I was right there when it was all happening, so chances are I did in fact see it. I will try to make a better report once I have had a chance to review everything.
Reactions: R. Doan and Hannah.Taylor

Tornado warned storm at El Paso Illinois that produced a brief touchdown, naturally I did not see it... 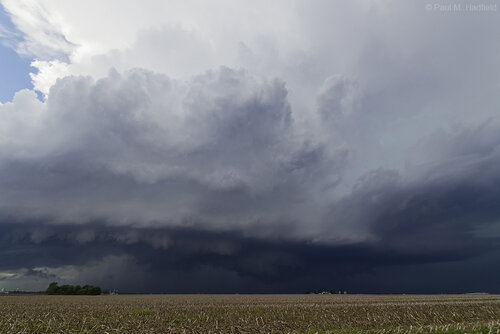 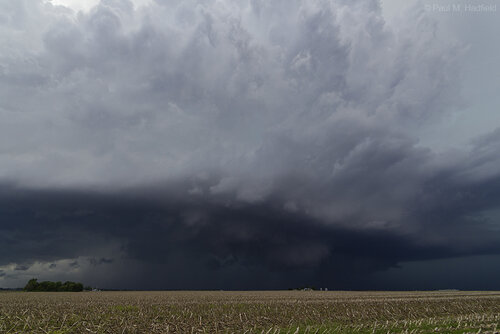 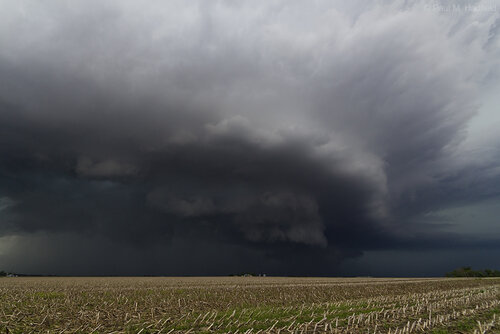 This was a really good chase for me because I´m pretty much confined to Illinois this year. The ironic thing about it was the night before, I went through Gibson City Illinois and they had Twister playing at their drive-in theatre. As far as the chase itself, I was near Round Grove Illinois for this tornado. I just loved how the colors changed as it crossed the road. 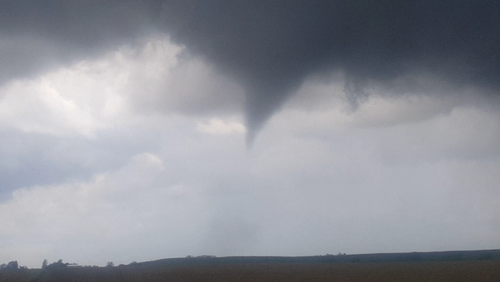 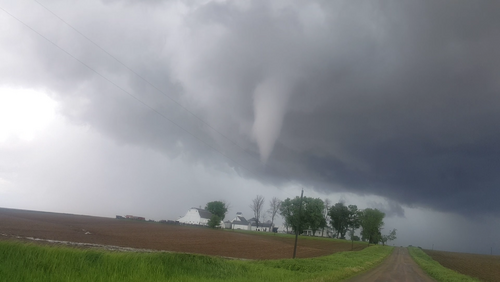 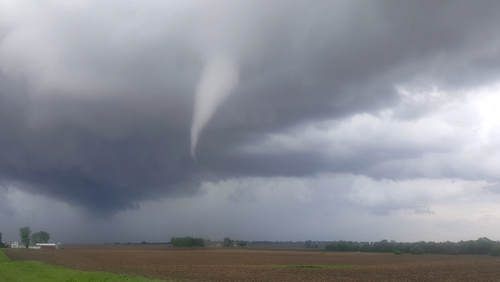 Same storm, different tornado near Coleta Illinois. I was questioning whether or not it was actually a tornado until I cleared a tree line and saw the ground circulation. 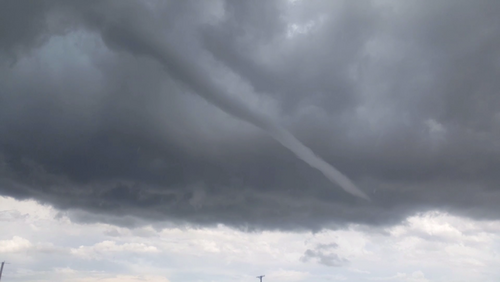 I had a decision to make on whether to continue with the storm that produced the previous 2 tornadoes or the growing storm to the south. I figured to bail on the original storm and met the next storm near Chana Illinois and was not disappointed. The structure and the motion was amazing. It did produce a brief tornado. You can see some debris underneath the bowl funnel above in the first image. 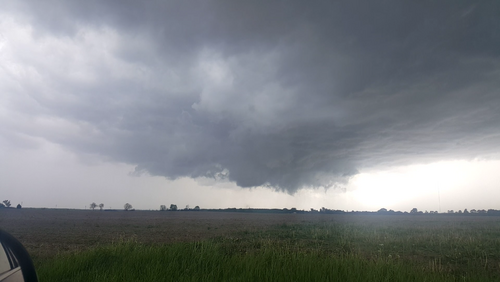 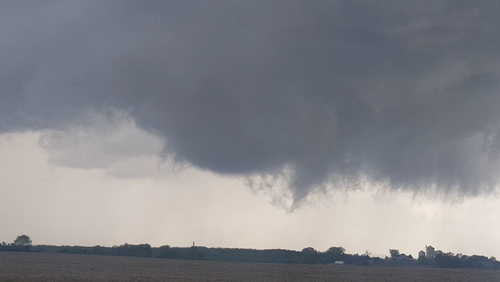 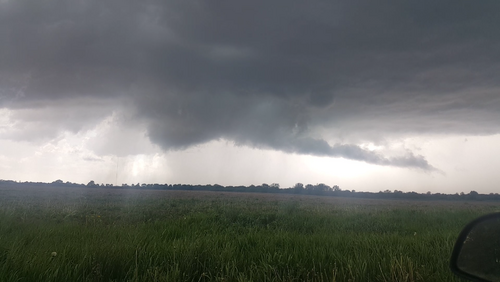 Got the sunset to cap off what I thought was a really fun chase! 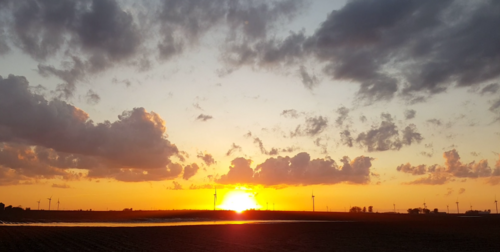 Paul & S. Kalka,
I was also on the El Paso cell and shot these before I repositioned south and lost my chance of seeing anything. Stayed with it until east of Pontiac. 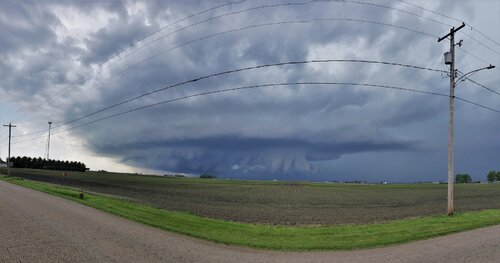 I stayed the night in Ames, IA Friday night which put me in a hell of a pickle deciding if I should stay in Iowa/Illinois or drive away from a 10% tor and head towards northwest Kansas. I ultimately chose to go west after putting all my faith in what the HRRR was consistently showing in nw KS and sw NE. Storms fired west of Goodland but couldn’t quite break the cap. It was odd because while I could hear thunder, I never saw a single CG. I don’t have scientific proof but my experience has told me that a lack of cloud to ground lightning is an indicator that the storm isn’t surface based and/or is still struggling with the cap. I can’t believe how consistent the hrrr was in breaking out a couple of isolated supercells up until about 6:00 pm the day of and then completely reverses course. I don’t think I’ve ever seen the hrrr be so consistent run to run in showing the same storm in the same spot for so long. Lesson learned is to take the CAMs with a grain of salt, which I already knew but I guess I was desperate. In the end too many miles and too many hours spent on this setup, especially when I could have stayed in Iowa and been home that same night. In reality I probably would have been in Illinois and missed the Iowa tornadoes anyway. Hindsight’s a bitch.

Chased in the Texas/Oklahoma panhandles. Didn't get crap for storms, but was greeted with a beautiful mammatus display.