First off, BIG thanks to Bob Schafer for yesterday's chase. Secondly, BIG thanks to Mother Nature for showing up putting on one hell of a show starting at 3:53 pm in Holly, CO and all the way back to Coolidge, KS on the return leg with an amazing artillery lightning show. Yesterday was quite the spectacle. While I didn't fare as well as others in terms of photography results, I saw EVERYTHING except a tornado on the ground. I saw funnels, I saw rotating wall clouds, stationary wall clouds, hail, intense, frequent and unbelievable cloud to cloud lighting and cloud to ground lighting, insane inflow, spaceships and some amazing structure. It doesn't get much better than yesterday.

I rendezvouzed with Bob Schafer in Holly, CO around 3:53 pm and immediately a storm was in progress and tornado warned. We followed it through Coolidge, KS and Syracuse, KS stopping several times to watch it cycle. 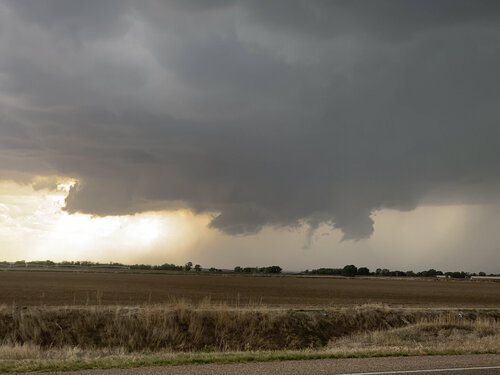 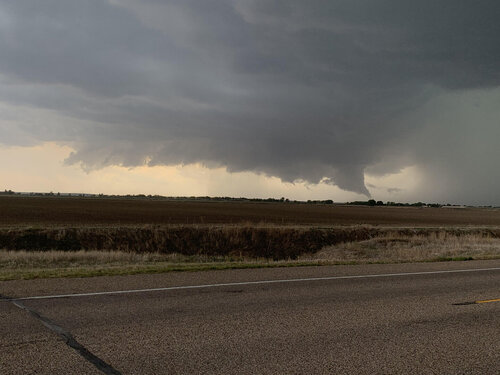 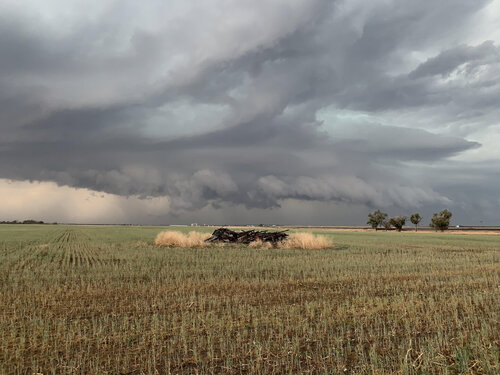 In Deerfield, Bob turned South and went for home. I continued chasing. After consulting the radar, it appeared everything to my direct west was going linear, so I dropped down towards Sublette to one of two discrete cells, the other was in Moscow/Satanta. I chose the cell directly to my south. A beautiful floating spaceship right above KS-83. 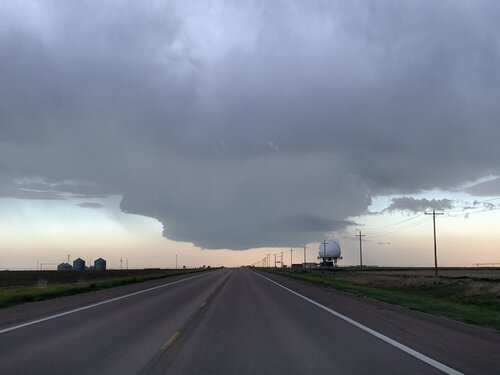 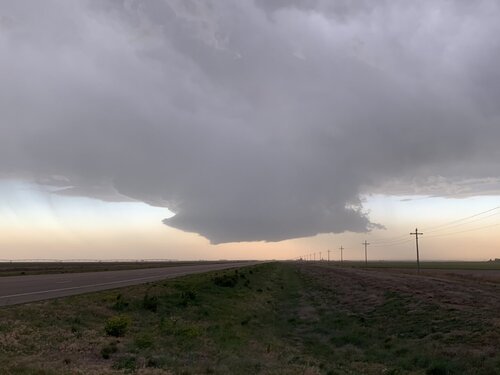 Sublette storm in the center, Moscow storm on the right. 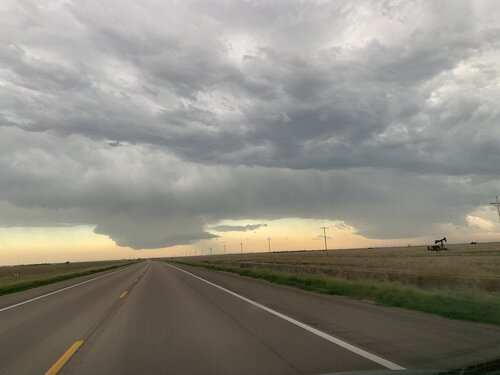 I passed the Dopplar radar station on the right hand side of the road, and pulled off onto a dirt road with a power station there. As I did, crazy inflow got going being sucked into the Moscow storm (at the time I thought it was the Sublette storm, but I later realized that wasn't correct). I was at least 30 miles away from the Moscow storm. In the process of filming the inflow I temporarily lost my hat but was able to run it down. I then went down to KS-144 and went east trying to get out ahead of the Sublette storm but much to my chagrin, it lost it's intensity, structure and fell apart. 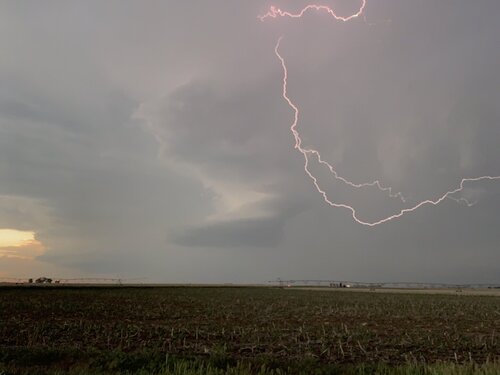 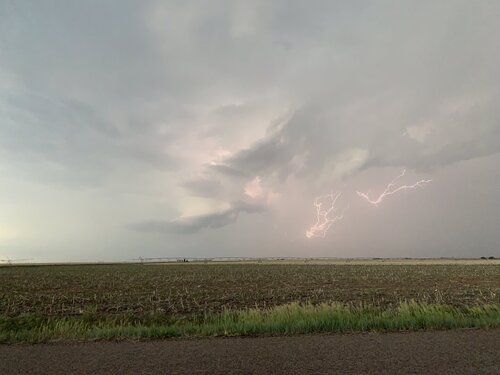 By that time it was dark so stupidly, I called the chase. I haven't had much experience with chasing after sundown and my comfort level is iffy and I was by myself. Despite that I had the hunch I should go back to the Moscow storm but pushed it out of my mind and headed for home. Big mistake. The pictures I saw coming in on Twitter later were unbeliveable and amazing. I kicked myself in the shin all the way back to Colorado. Still a big day and a fun one. Congratulations to everyone else who got the amazing structure in their photographs.

I need to upload videos of the inflow near Sublette and the wall cloud in Holly but I'll have to get to those later this evening.
Reactions: Todd Lemery, NancyM, Jeff House and 7 others

You're welcome, Hannah. I enjoyed chasing with you, too. Given all the tornado reports from near Holly, I think your second photo is probably a tornado.

It's always funny when when you watch a video the day after a chase and there's a tornado on the vid you never noticed during the chase. I honestly don't know what that is to the left of the big lowering beginning at about :25, but it looks like it might be one, or even two, landspouts. Beats me. This is the entire video'ing of my day. Hannah always takes better photos than me, so I kind of left the photography responsibilities up to her. I'll be removing this from YT in a couple weeks or so.


hmmm, not working. Might still be processing. Maybe a little later.
Reactions: Todd Lemery, Marc R. O'Leary, JamesCaruso and 2 others

Jumping in to add support here. I was lucky enough to catch the first updrafts on the Granada CO storm before it went nuts! While most tor reports came from 8 miles away in Holly, I was south directly in front of the cell in question.. You can see that there are 2 separate tornado spin ups not landspouts. You can clearly see the rotating base.
Reactions: Jeff House, Todd Lemery, Marc R. O'Leary and 3 others

Left OKC late and got monster structure north of Liberal. Was originally targeting around Woodward the night before. I fully questioned if I was wasting time and gas. Really glad I kept on, this was top notch stuff.

Read my recap and check out the photos

So many great photos, so here's 1 Finally getting around to posting my chase highlights from this day. This was the 2nd day of my chase trip. Funny enough, originally my chase partner and I were going to chase the day before in Wyoming, head home that evening and not chase this day and then possibly chase the next couple of days. In the end this ended up being my favorite chase of the trip and my all time favorite non-tornado chase day.
Got on the first cell by Syracuse but missed the landspouts. Still got in on some golf ball sized hail as it slowly moved east.
Adjusted east with the storm and was right there when it went tornado warned between Lakin and Ulysses. Saw an area of interest back in the rain at the front of the collar, but hard to say if there was a tornado or not.
We left that storm and went east. We stopped at one point to watch the absolutely insane CG barage by a wind farm. In fact didn't want to get out of the vehicle to even snap pics.
We made it to Hwy 83 and started dropping south towards the 2(!) LP cells that were close to each other near Sublette and Moscow. Turning south we ran into the intense easterly winds probably gusting over 50 mph and drove through near zero visibility in blowing dust.
We ended up just south of Sublette and set up our cameras facing the gorgeous storm near Moscow/Satanta. Here we were able to sit and take pics for almost 45 minutes as the storm put on the best show I've seen in years.
The storm went tornado warned and once it moved closer and we lost the structure we drove west towards Moscow along the southern edge of the complex of storms. Here we ran into probably 60-70 mph cross winds with torrential rain and tumbleweeds blowing across the road.
At this point we decided to call it a night and head south towards the next day's chase target.
This one chase gave us top notch structure, large hail, landspouts, severe winds, zero visibility in blowing dust, tornado warnings, some of the best CG lightning displays we've seen in a long time, LP cells, HP cells, nearly stationary storms. The day had everything!!
Here's a video of some of our highlights: 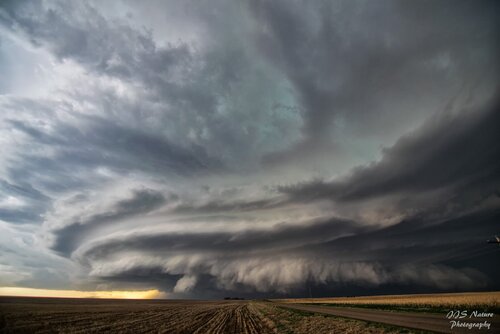 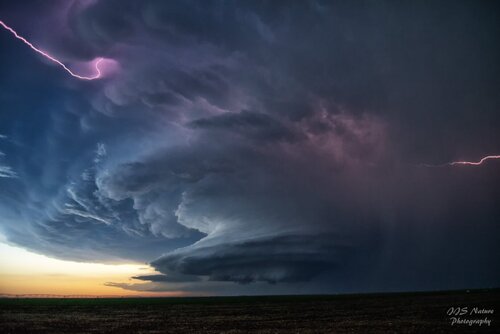 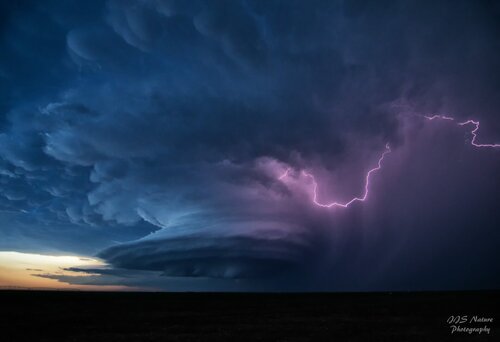 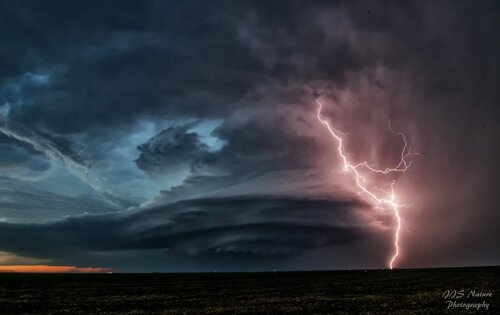 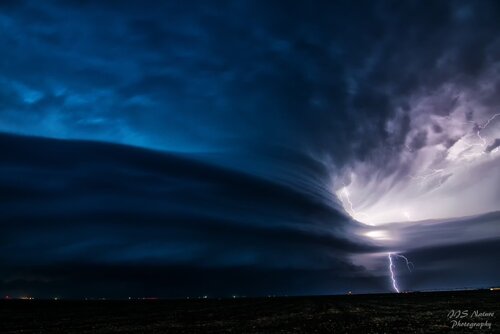 I made a 10x speed video of the amazing storm and uploaded it to YouTube. Make sure to watch in 4k if you can!
It says 5x at the beginning bc that's what I was originally going to do, but ended up doing 10k instead.