Today's target area was Fort Stockton, TX and two storms developed around the city by mid-afternoon. Convection seemed to struggle a bit at first, probably due in part to weak forcing and somewhat large T/Td spreads in the boundary layer.

The northern storm gradually started to evolve into a supercell, to the northeast of Fort Stockton. After drifting north, it started to make a turn toward the east as it displayed more classic supercellular characteristics, as a right-mover. The road network was a bit limited and at one point I found myself driving down a series of plant roads with dead ends and blockades... The best solution I could come up with was checking out the storm from the backside, rather than driving out of my way to go around to the south/southeast.

There was a vivid rainbow, which appeared as a double rainbow at times, behind the storm. With the hail core ahead, I took my time to allow the storm to push forward. The relatively slow storm motion gave me plenty of time to take in the views and move at a leisurely pace. 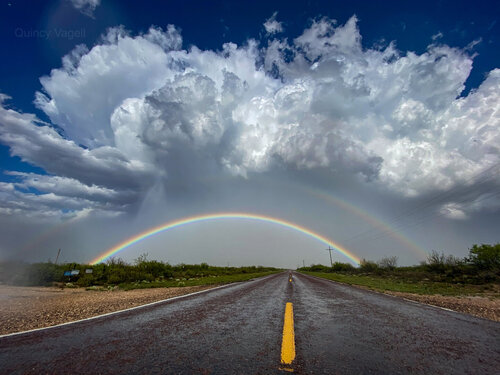 As I pulled off the road to finish my WxChallenge forecast shortly before 00z, Reed pulled up beside me and chatted for a bit (at a >6 foot distance). Although the storm was somewhat elevated to that point, it looked like it was attempting to become more surface-based over McCamey. We split ways and he core punched the storm, while I preferred to stay ahead of the storm to view its structure. Aside from Reed, I only saw about three or four other chasers around the area.

With a somewhat limited road network, I dropped down to US-190 and then back north on TX-349. The other option would have been to continue on US-190 east, but I was curious to see what kind of hail this storm had put down. By this point, it was nearing sunset and the storm didn't look like it had much low-level rotation, so I was no longer chasing the storm. Maybe hail chasing? 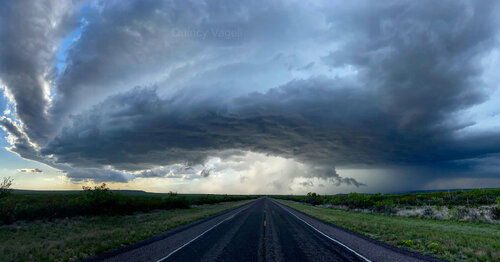 I moved north and the roadway was turning into a bed of hail. About six miles SW of Rankin, TX, the hail appeared the most impressive. There was as much as 4-5 inches of hail on the road in spots and hail stones on the ground averaged about quarter sized. There were a few stones as large as golf balls.

https://twitter.com/i/web/status/1248780703891968001
That's about it for this storm chase. Chasing a bonafide supercell near Fort Stockton has been up there on my bucket list and I guess I experienced that today. The storm I chased is only just now starting to fall apart, south of San Angelo. It tracked about 140 miles and left a blanket of white (hail) across much of that path.