I started the day with a target of northeastern Arkansas. I did not feel it was worth it to go up into Illinois for a variety of reasons. The southern play would have a more conditional threat, but a better environment to work with.

By the time I got to Searcy, AR, I decided to head northeast toward southeastern Missouri, as an increasingly agitated cumulus field caught my eye. A few semi-discrete storms developed in the area, but the storms were struggling to organize. As this was happening, a storm developed over far northern Arkansas, near the central part of the AR/MO border. At first, I had doubts about this storm maintaining itself, but as it moved ESE and split, the right split was beginning to tap into the northwestern fringe of a plume of rich boundary layer moisture.

Even though larger low-level CAPE was tugging part of me to hang with the southeastern Missouri storms, I could not help but favor a more discrete storm that would eventually move into an area with dew-points near 70F and stronger near-surface winds. The low-level moisture field farther north was a bit fragmented, with dews generally in the low to mid-60s. It was also going to make the drive back after the storm chase several hours shorter.

I finally broke away and circled around back into Arkansas. Even though it would take about 90 minutes to finally catch up to the storm, it would be moving toward me and pushing off from the hilly, forest area, into the more chaser-friendly part of northeastern Arkansas.

As I looped around and got out of the direct path of the sun, a well-organized supercell could be seen near Swifton. In terms of storm structure, this was probably one of my best storms in Arkansas to-date. I wanted to keep back just far enough to see the structure, but with sunset approaching, the low-level jet strengthening and signs of better organization on radar, it was time to get a closer look. Placement was lucky in terms of chaser-friendly terrain, as if the storm had been just 15-20 miles farther west, it would have been much harder to see. 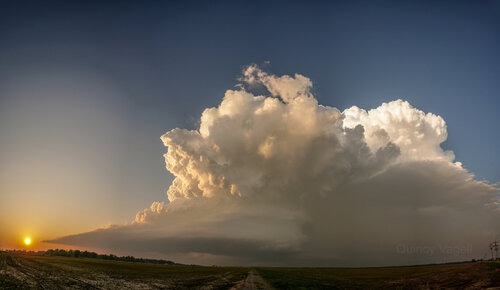 The two options would be to drop south into Grubbs and then turn back around to the northeast toward Cash, or head east directly into Cash. The latter option would be close to core punching and I generally favor a route with a better view of the storm. The only issue was that once in the Grubbs area, there is no reliable road east, as there's a wildlife area filled with marshes and trees. With daylight fading, it was time to dart south into Grubbs.

I turned northeast on AR-18 from Grubbs and had a visual on a low hanging, grungy wall cloud. This beefy structure led me to believe there was a relatively high probability of this storm producing a tornado, imminently. I stopped just south of Cash, as I was close to the storm and there was a funnel cloud lowering.

I went about one block east on a dirt road before it came to an end. It ended up being a good place to stop, as the storm went on to produce about a 2-3 minute tornado just moments after I stopped. The time was around 7:50 p.m., so it was after sunset and light was fading. I started an Instagram live broadcast as the tornado was forming and that footage would have been good if the resolution was better, but it will do:

https://twitter.com/i/web/status/1248055193524109313
Most of the footage I got is a bit on the grainy side, due to poor lighting and a lot of blowing dust. I've only seen a few tornadoes in Arkansas, but this was the most photogenic by far, even if I wasn't able to get the clearest footage. Either way, I'd say it's probably the best tornado chase I've had since at least 2017 and possibly 2016, considering how close I was able to get. 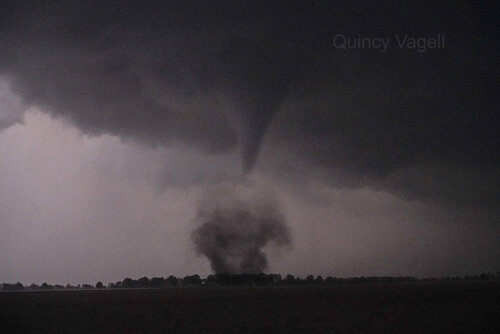 Once the tornado appeared to dissipate, I decided to bail and get ready for the long drive ahead. The storm did produce another tornado a short time later, to the south of Jonesboro, but I did not see the second tornado.

I did not get far before I saw the distant supercell lit up in the night sky to the east. I stopped for a few more photos before, once and for all, calling the chase off. 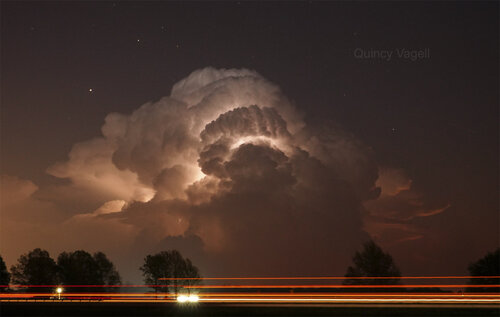 Quincy: As I frequently communicate with a couple of TV stations behind the scenes during severe weather, I wanted to let you know how much your reports/photos/videos were appreciated Wednesday evening. They definitely helped with coverage of the event and undoubtedly helped raise public awareness before the more destructive tornado struck Harrisburg, Arkansas, later in the evening.

HRRR depicted a significant storm carving across the I-72 corridor in Central Illinois that verified. I started a little further north than I should have at Elkhart (1st pic) so then worked to re-position further south near Mt. Auburn (2nd - 4th). Skirting the core from just south of Illiopolis (not too far from where a barn was leveled), got into some proper wind that reminded me to tell you not to buy a Jeep Patriot for their poor aerodynamics (inside view is terrible too j.s.). For being particularly intense, storms weren't exactly photogenic and in hindsight, to have worn a mask would've been helpful not for anything pandemic but rather the blowing dust. On passage after things settled down, I stopped by a local state park that although closed (yes, every SP in Illinois is off limits lest you receive a $195 fine) has a circumnavigating county labeled service road leading to an open area for sunset. Moments after getting the partial rainbow (5th pic) thinking I was going to next get an ongoing mammatus display, a shot rang out from the forest on adjacent private land. I suspect it was a turkey hunter irritated by my presence that under normal circumstances wouldn't be a problem. I wasn't trespassing but they've been given the shaft this year with virtually nowhere to hunt and no refunds given on permit sales so I'd be annoyed too. Why anyone would be in the woods before/during/after the storm that went through is beyond me but then again I suppose we're not that much different? Either way, a lot of folks are on edge right now so I left. Illinois is a mess, particularly with the broad brush heavy handed uncompromising restrictions on downstate or rural public natural area usage (worth noting should you choose this season to visit the People's Republic of Chicago). Meteorological summary c/o NWS Lincoln HERE (also contains the mammatus scene I was denied). 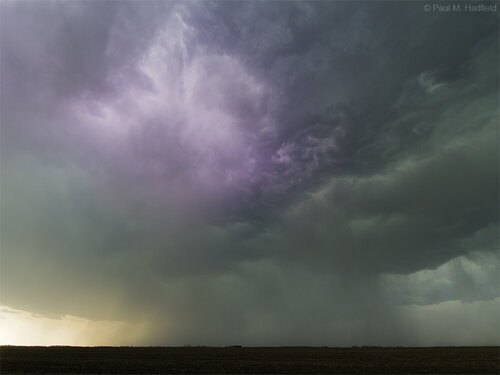 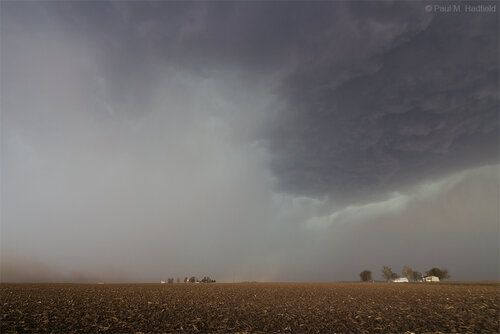 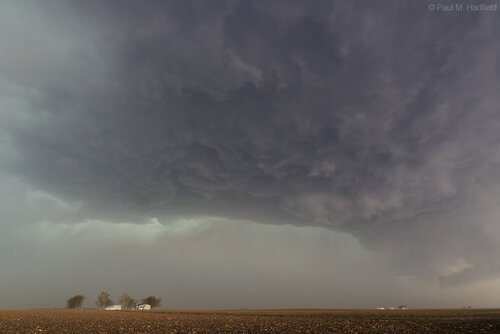 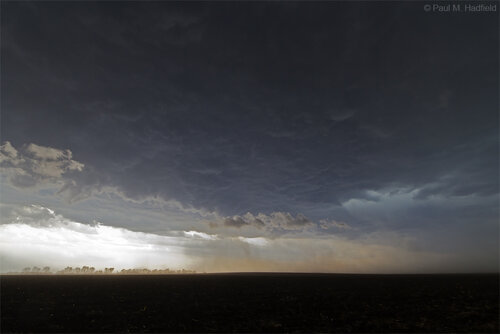 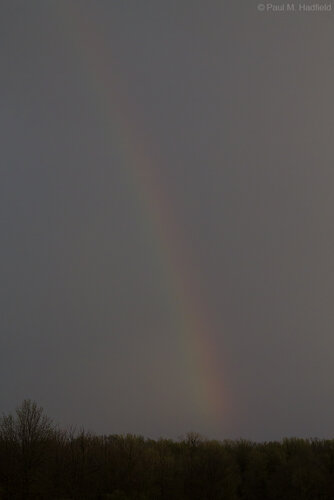 I had a low-stress, no-hassle backyard chase, literally not leaving my backyard about 50 miles southeast of Springfield IL. While Springfield and Fecatur areas were being pummeled by hail and high wind, I watched this lone storm cell grow until cloud cover from the storms to my north impinged on the view.
Right before sunset and shortly after the storm front had dropped temps nearly 20 degrees I was treated to a private showing of yellow and pink mammatus directly over my farm. These were some of the crispest, most well-defined mammatus I’ve seen for some time. I tried to take some time lapse but the winds were far too strong to keep a steady camera. I even tried bracing against my windmill tower but the wind had it chattering like an out of balance washing machine.
Video and stills directly off iPhone X with no edits. And it appears that my balky rural internet is going to force me to post my time lapse separately from my stills.
Linda Kimbrel 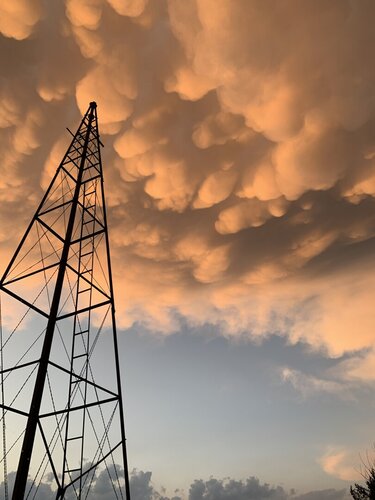 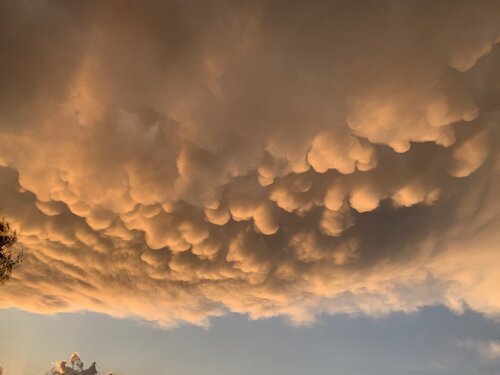 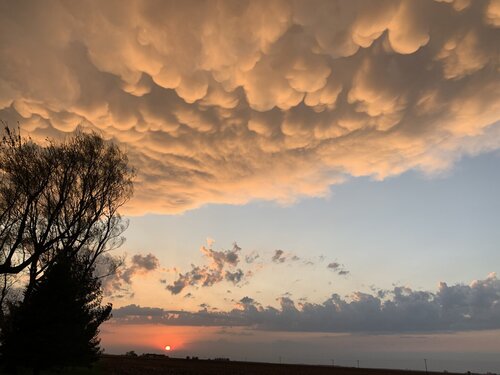