With the COVID-19 restrictions in place, I didn't have a proper target on this day that was within the range I felt was appropriate to drive. Instead I opted to simply observe any storms that affected the St. Louis region, though I didn't have any good options available by noon. The entire region was socked in with clouds, precip and embedded convection.

I left home at 1PM to intercept the first marginal supercell of the day moving across the river into Illinois from near Farmington, MO. It was heading toward a small area of clearing that had managed to materialize in southwestern IL. Despite briefly prompting a tornado warning from a transient couplet lasting only a single scan, the cell collided with a patch of stratiform rain and merged with it, meeting its demise. I then headed west to Wentzville, MO (western STL metro) to position at the edge of the cloud deck and wait for the expected dryline/frontal activity. Despite about an hour of sunlight, the low levels failed to achieve any appreciable destabilization before the skies became overcast again for the rest of the evening.

By 6PM, there was no agitated cumulus field upstream of my home region, and it was obvious there would be no further activity within my pandemic-constrained range. I was tempted to drive to Evansville to observe likely tornadic supercells there after dark, but the prospect of crossing a state line in which both were under non-essential travel bans ruled that out. So, I called it a day and made it home by 7pm. I saw one visible CG the entire day. I also didn't shoot any photos or video.
Reactions: JeremyS, Chris Demeniuk, Nate M. and 3 others

I played around with several early cells that popped up in Northeast Missouri and moved into Western Illinois. I did get on a couple of tornado warned cells. The most interesting cell tracked up the US 34 corridor and developed a wall cloud with tight rotation and a notable wet RFD as it tracked over Galesburg. I repositioned between Wataga and Oneida. It had a noticeable clear slot and the storm seemed to slow down substantially, which indicated to me that it may have been interacting with the warm front. When it did it developed very tight and concentrated circulation in the rain-free base and had a very well-defined cone funnel. I was certain that it was going to put down a tornado, but I could not confirm any circulation on the ground.

Eventually it ended up moving into more stable air, so I backtracked to another cell that follow the same trajectory, albeit 15 mi west. It exhibited the same difficulty doing anything more than showing rotation with a well-defined lowering until it got near the warm front and apparently produced a brief tornado near Cambridge, IL right about dusk. This was one of those situations where every time I got out to start taking video, by the time I had my tripod set up there really wasn't much of anything to shoot anymore, so I don't have anything to share digitally.
Reactions: Paul Hadfield, James Wilson, JeremyS and 4 others

I chased around the Galesburg/Monmouth area with Kholby Martin and Jesse Risley yesterday. We observed a couple tornado warned cells in the area, but fell short on observing any tornadoes due to storm speed. Here are a few captures that I took yesterday evening:

I targeted Waterloo, IA. I knew storms would likely initiate farther south/southwest but I wanted to make sure I was downstream and not get behind storms that would be moving at 50+ mph. I got to Waterloo and decided to head farther south to Toledo, IA. Not long after arriving storms started to go up to my west and southwest, just east of Des Moines. I intercepted my target storm near Melbourne, IA after it went tornado warned but I never saw the tornado it produced. Terrain in this area had just enough hills to make it tough to have a consistently good view. After it produced the tornado the storms really struggled to do much. Not sure if there was a capping issue or what happened, but after an hour of tracking the storms northeast I was ready to call it a day and head back home.

At this point I was on highway 63 heading back towards Waterloo to go home when the VIL started to spike on a couple of the cells just to my east/northeast. I was behind them at this point so I was playing catch up in case something happened. As I get close to Waterloo I swear I saw it produce a tornado but the hills cut off my view so I couldn't confirm it. As I get to the southern outskirts of Waterloo the storm puts down a weak, odd looking tornado. Power was out in parts of Waterloo so something got hit. There may have been a larger tornado before I got into view of the one I saw. I am curious how things unfolded in this area as I only got a glimpse of what happened.

I followed the line all the way up to damn near Wisconsin, staying on the west side of the line. For some reason the visibility was way better on the backside of the line than where you would normally want to be. Not sure why. I got one more tornado northeast of Maynard, IA with a thin, almost horizontal rope tornado. It was almost like I saw the rope out stage of a larger tornado. I know there were reports of a large tornado south of where I saw this so it is possible I caught the end of that tornado's life. The hills again cut off my view of the tornado when I tried to get it on video. I do have some video but it's mediocre at best. I'll see if it's worth posting to YT.

Anyway, after 14 years of chasing I FINALLY got my first Iowa tornadoes. Also got my first March tornadoes. Can't believe it took so long to knock either one of those off my chasing bucket list.

Here is a pic of the Waterloo tornado from my video camera.

Played western IL. Was not excited at the prospects of the day given the morning convection that ruined the moisture return, but gave it a shot anyways given the synoptics that were in place. Ended up on the Supercell that would eventually produce a tornado after dark near Cambridge, IL. Managed to stick with the storm all the way to Cambridge and caught initially a small funnel, and then the Cambridge tornado shortly afterwards. First March tornado for me, immensely frustrating day. Still felt good to get out and chase again though!

I wasn’t going to go chasing this day but once Iowa looked better I was suckered into going out. I packed all the food and drinks I hoped I would need and with the great gas mileage my Nissan gets I figured I’d only have to fill up once. In the end I ended up being reminded why I don’t chase when storm motions are 50 to 60 mph.
Was just south of the brief tornado near Baxter northeast of Des Moines, but of course due to storm motions I never came close to catching that cell before it died. Thereafter I stayed near the south end of that same line of storms that was slowly developing and followed those northeast for a bit, but I stayed just too far south before they produced the tornadoes around Waterloo. Of course thanks to super fast storm motions, I could never catch that section of storms again if I wanted to. Looking at surface observations I figured by that point the storms would be too far north to produce.
Looking back, the tornadoes in Iowa all developed just northeast of the surface low. In the end I was always just a bit too far south and I stayed basically due east of the surface low.
Finally, having chased the group of cells that produced the Waterloo tornado, but always being behind them to the south, I was in position to be in front of the last good cell in Iowa right before sunset.
I positioned myself just south of Langworthy north of Cedar Rapids and had the tornado warned storm pass just to my west by less than a 1/4 mile. There was a pretty interesting lowering that came by me accompanied by a rapid change in wind speed and direction as it flew off to the north. I followed it for a few miles before losing it into the darkness and then started the 4 hour drive home straight into 30-45 mph west winds. 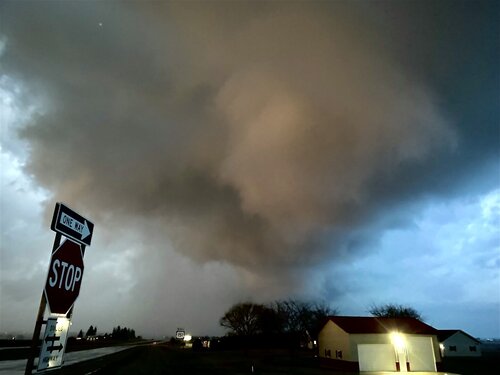 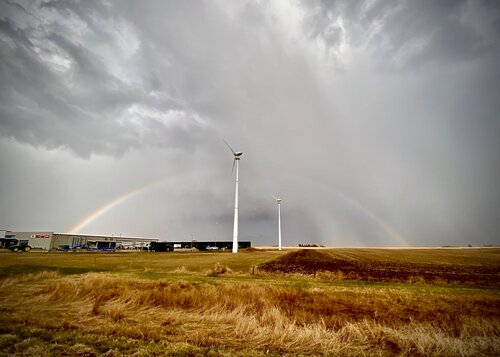 I targeted the same areas as most and since I was alone it was hard to keep up with the storms and document everything. I have not reviewed dash cams as of yet so I hope I can pull better stills later. Funnels dropped a few times and it was hard to tell when or if anything touched the ground as they quickly went back up in all cases. Here are a few very boring photos but I post them to show how hard it was to get a good shot while driving on fast movers with quick drops. The favorite and probably my best photo of a the day was a weird one taken while driving which turned out to show a weird face looking thing. There was a crescent moon in between two cells but for some reason my phone took it as shown below. LOL! 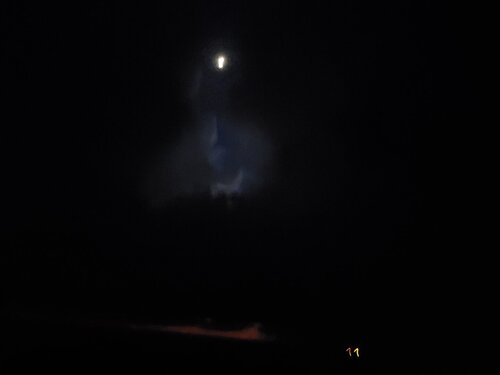 Midday severe thunderstorm moving across Christian and Macon (IL) counties that reportedly dropped golf balls at various points along the way. I however, didn’t encounter any hail for maintaining proper social distance. End of day PDS (particularly delightful sunset) was a nice reprieve for being cooped up as we’ve been. 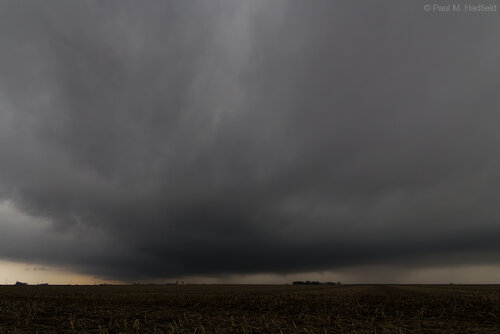 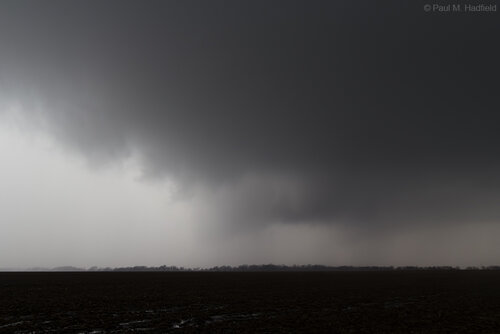 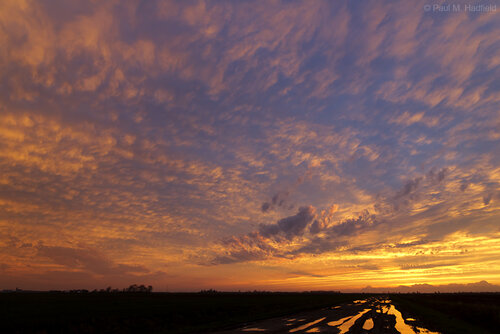 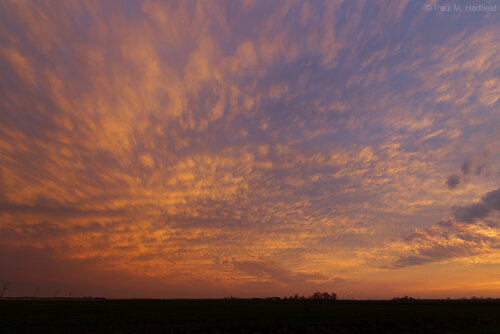 Made the trek to Illinois with an initial target around Galesburg. Ended up being suckered into Lieowa but made it back in time to catch the supercells that blew up near Macomb. Got the tornado near Cambridge at dark.