I chased yesterday in Southeast Missouri targeting the bootheel ahead of a cold front for the development of supercells and possibly a few tornadoes. We arrived down in Poplar Bluff around 4 oclock and immediately had storms fire to our west near the town of Ellsinore, MO. One storm became dominant producing rotation in the mid levels on radar and prompting a tornado warning. We followed this storm for roughly an hour or more as it cycled and eventually became outflow dominant and died off. The storm looked healthiest early on near Ellsinore where it had a pronounced wall cloud with pretty good rotation. After that, it seemed to run into some stabler air and caused the storm to die off. I noticed that 0-3km CAPE was significantly weaker the further east and southeast you got, so I'm guessing this is the culprit that led to the demise of our storm. Not an awful first chase of the season, but could have been better for a 6 1/2 hour drive. Your typical early season March supercells. Here are a few shots I took:

https://flic.kr/p/2iDWz4M
Above: Panoramic of supercell thunderstorm near Ellsinore, MO. This was taken from the same road that an EF-3 tornado crossed back on May 25 2011.
Reactions: Paul Hadfield, Nikola Pavlovic, Jeff House and 4 others

My day was similar to Ethan's. I had chased in this exact area on March 2nd, and found the terrain west/north of Poplar Bluff (hills and trees) to be very difficult for storm visibility. My plan then was to wait on the edge of the better terrain east of Poplar Bluff for storms to come out of the Ozarks. As I made the turn west at Sikeston, my hopes for the day fell due to the solid overcast and cool, stable low levels extending nearly all the way to the edge of the better terrain. Storms would have a very narrow axis of surface-based instability to work with and might not even make it out of the hills, so I continued to the US 60/67 split north of Poplar Bluff to wait for the storm.

Despite a rapid intensification and hard right turn just northwest of town, the storm rapidly fell apart as it moved into the metro area. A good thing, as a tornado at this point would have gone right through the northern part of town had the storm continued deviating right and maintaining intensity. The RFD still had a bit of a punch, however, and the wind was roaring in the trees just north of town. I also heard sheet metal clanging in the mix, but didn't see the source of the noise.

As the storm hit the cooler air, it quickly fell apart. I called the chase and went home, opting not to go back for the newer development to the west. Arrived home at 8:30pm.
Reactions: Todd Lemery

Here’s one from the other side of the Mississippi River. I had been watching this event for a dew days prior. Originally on the fence about chasing, I committed after reviewing 00z model guidance. With impressive wind profiles and sufficient moisture, the key ingredient I felt this event was going to hinge on was instability, but with 500-1000J/kg SBCAPE bubbling northward, I pulled the trigger.

Left home at approx. 6:00 am local time. Originally targeted the warm frontal boundary near the developing surface low/triple point, choosing Evansville, IN as an initial staging area, but that location was conditional on the location of the boundaries once I got there, as well as storm motion. I was fully prepared that I would likely need to move south into KY to (a) avoid large hail, (b) get into the better parameter space should the frontal boundary not pan out, and (c) not get pinched against the Ohio River network by advancing storms.

Initial storms within the warm sector appeared disorganized and messy as they moved east, leaving me to focus on a trailing linear segment that looked better organized than anything else out there at the time. I projected its forward path into a pool of decent CAPE atop a ridge of low level Theta-E, so I allowed it to lure me into the questionable chase terrain and road network of western KY, right in the middle of the SPC 10% hatched area.

I drove down to Madisonville, KY. Any further south would have put me in densely forested areas with even poorer road options, and a relatively clear area extending to the NW of town was going to give me my only shot of decent visibility as the storm approached down that very path.

The tail end was starting to look a little more organized at this point, generating its own MD, where forecasters predicted it would become more surface-based and mature into an honest-to-goodness supercell as it moved into Kentucky. Fantastic.

And in the words of my friend Mr. Daughtry, “I was chasing, but nothing was all I found.” 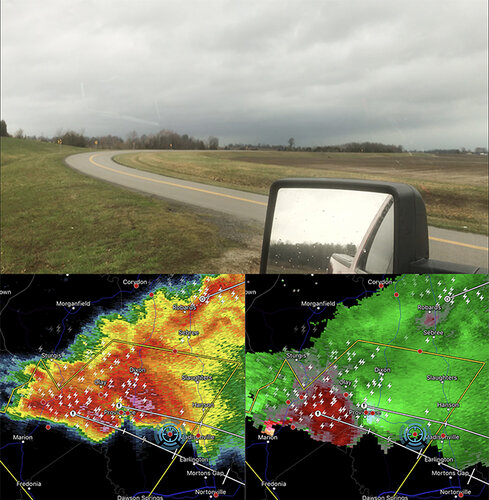 The grungy, hazy environment reminded me a lot of the May 20, 2019 OK event, and visibility was pretty not great. Surface winds were backing as the storm approached, with warm inflow rushing in from the southeast. As the updraft region came into view, I remember thinking, “that’s it?” Low-contrast, junky base with no features of interest. The storm was organized enough to produce large hail, gusty wind, and some brilliant CGs, but little else. I stuck around just a little longer, but eventually had to move east, then south to stay ahead of it (specifically ahead of the hail). I calculated my departure time on having to drive back through town, where sirens were wailing.

A large chunk of Highway 70 was closed in both directions south of town, forcing me to take the Interstate to move around the storm, but it still got away from me as it moved into the hilly forests to the east. I believe it got its act together and picked up a Tornado Warning a few counties to the east, somewhere near Mammoth Cave National park, but I don’t know if it ever produced.

At this point I headed west a bit, thinking outflow from the storm may set up a boundary and provide some lift (it didn’t), or that the remainder of the trailing cold front would kick up some additional activity in the area (nope). As it turned out, that frontal boundary was further west than I thought it was. An isolated storm along it west of the Mississippi picked up a Tornado Warning west of Poplar Bluff, MO, and it became clear that said storm was going to be the only remaining play. I started heading that way, along with most others in the area. Eventually I stopped and did a reality check: I was over 90 minutes away, and even if the storm held together that long, it’d be dark by the time I got there. LE reported a tornado, but I haven’t seen any other reports. If someone was on that storm, maybe they can add a post on this thread. You guys beat me to it.

Positive Takeaways: I was able to shake off the rust from the winter, scratch the chasing itch, didn’t get blasted with supersized hail, and I got to experience 70 degree temps for the first time this year.
Reactions: Nate M. and Dan Robinson

Once again, glad to be a member here. This was a semi-local chase for me, and a great way to dust the cobwebs off. I left Joplin shortly after 11am. Arrived in Poplar Bluff at 3pm and waited on storms to initiate. I had just enough time to fuel before things began happening as storms fired just east of West Plains. I blasted west on 60 to catch the dominant storm as it turned right and was producing an impressive wall cloud near Ellsinore. As usual for this area, visibility was pretty poor due to the Ozark terrain. The storm basically followed 60 southeast all the way to Poplar Bluff. PB is a heavily populated area so I was thrilled when the storm spared them. Although RFD in town was quite intense. NWS Paducah has confirmed 2 EF-0 tornadoes associated with this storm. Alas, here's my very unimpressive results from the chase. I just wish things had been more visible, maybe next time. All in all I was so glad to get my mind on other things and have a great day chasing. Plus, I was home in my own bed by midnight. 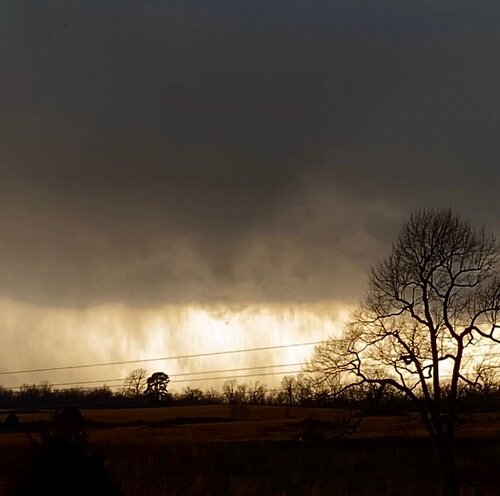 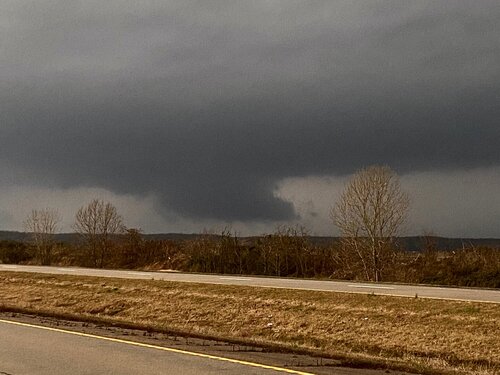