Arrived at Sikeston, MO at around 3PM. Was originally intending to head west for development CAMs insisted would begin at 21z between Springfield and Poplar Bluff. However, an agitated cumulus field just west of Sikeston signalled initiation right where I was, so I held position there. This quickly developed into a supercell right over I-55 that tracked east-northeast. At Cairo, IL, the storm developed a strong RFD surge with a pronounced hook on radar. This was the view at Cairo while crossing the I-57 Mississippi River bridge, first image is to the north and second to the northeast, showing a panorama of the inflow notch from within the RFD. The lowerings visible in these views had weak motion, and were severely undercut. 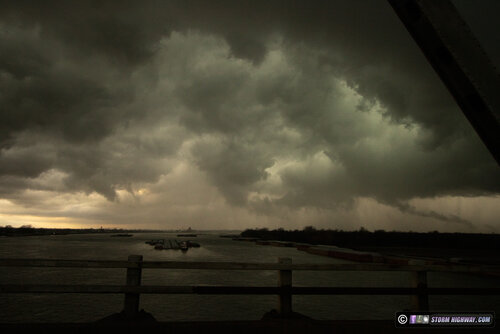 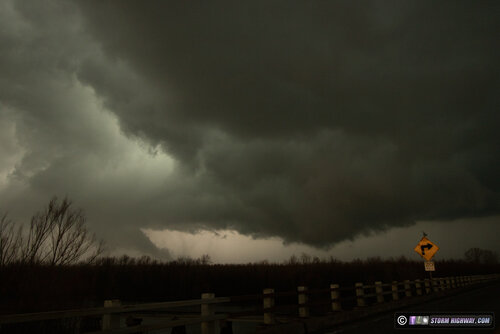 I stayed within visual range of these features to Barlow, KY. With terrain and roads worsening with eastern extent, the diminishing instabilty available to the east and later development to the west in better terrain and slightly more favorable surface winds, I decided to break off and head back to Poplar Bluff.

The expected development west of Poplar Bluff did not get going until after dark, and was in nearly impossible-to-chase terrain of the Ozarks. I decided to try and see what I could on Highway 67 near Williamsville - but the horrid terrain was unworkable. I returned back through Poplar Bluff to Highway 60 to jump back ahead, accomplishing this at Bell City. A strong circulation spun up just west of there, but buried deep in the rain - I had no visual. This was repeated at Benton along I-55 with another stronger radar-indicated circulation and RFD surge.

After that string of rain-shrouded mesos and diminishing lightning quality, I broke off the chase at Benton and headed home. I encountered a deluge of pea-sized hail north of Benton that covered the road.
Reactions: James Wilson, Jeff House, Rob Wadsworth and 4 others
You must log in or register to reply here.
Share:
Facebook Twitter Reddit Email Link
Top Bottom