In an attempt to rejuvenate this board, I'm starting a season long thread. We can keep general tropical discussion here, and I (or whoever) can start a new thread for each storm once we have a depression/named storm. 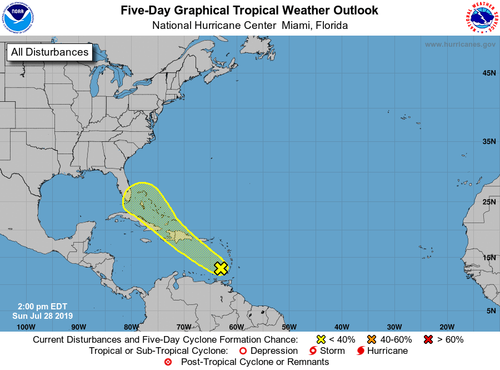 For the North Atlantic...Caribbean Sea and the Gulf of Mexico:

1. A persistent area of cloudiness and thunderstorms located over the
eastern Caribbean Sea is associated with a tropical wave. This
disturbance is expected to move west-northwestward to northwestward
across the north-central Caribbean Sea during the next few days,
producing locally heavy rainfall and possibly some flooding across
Puerto Rico and Hispaniola. Little development of the disturbance is
expected due to interaction with land. However, the system is
forecast to emerge over the Straits of Florida by the end of the
week where environmental conditions could be a little more conducive
for development to occur.
* Formation chance through 48 hours...low...10 percent.
* Formation chance through 5 days...low...20 percent.

Another one coming off the coast of Africa, this will be the one to watch. 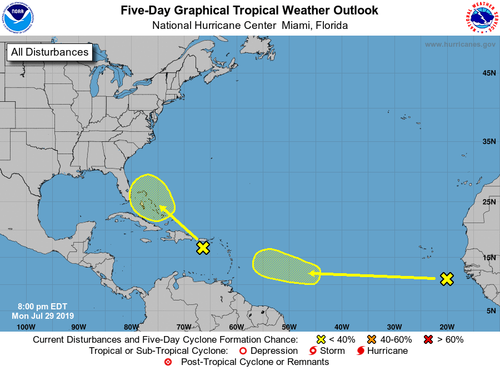 2. A tropical wave accompanied by a broad low pressure system is
producing a large area of cloudiness and disorganized shower
activity over the far eastern tropical Atlantic a few hundred miles
southeast of Cabo Verde. Upper-level winds are expected to be
unfavorable for any significant development of this disturbance
during the next few days. However, environmental conditions are
forecast to become a little more conducive for development over the
weekend.
* Formation chance through 48 hours...low...near 0 percent.
* Formation chance through 5 days...low...20 percent.

Justin Allen said:
Another one coming off the coast of Africa, this will be the one to watch.
Click to expand...

I honestly don't know about how hurricanes & all that works,
But the same thought of 'one to watch' crossed my mind when I saw this while looking at the NHC's postings this evening. .lol.
Last edited: Jul 30, 2019

Up to a medium: 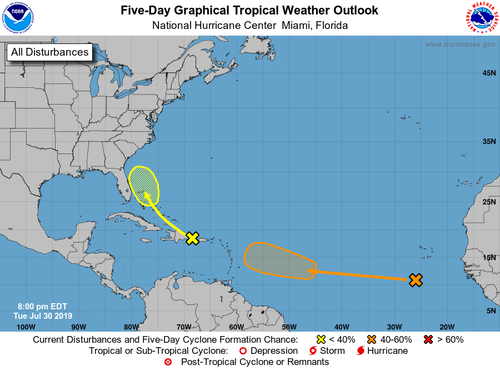 2. A tropical wave located over the eastern tropical Atlantic, a few
hundred miles south-southwest of the Cabo Verde Islands, continues
to produce a broad area of disorganized showers and thunderstorms.
No significant development of this system is expected for the next
few days while it moves westward at about 15 mph. Thereafter,
upper-level winds are forecast to gradually become more conducive,
and a tropical depression could form over the weekend several
hundred miles east of the Lesser Antilles.
* Formation chance through 48 hours...low...near 0 percent.
* Formation chance through 5 days...medium...40 percent.

2. A broad area of shower and thunderstorm activity is associated with
a tropical wave located several hundred miles southwest of the Cabo
Verde Islands. Little to no development of the wave is expected for
the next few days while it moves westward across the eastern and
central tropical Atlantic Ocean at about 15 mph. Environmental
conditions are forecast to become more conducive for development
over the weekend and a tropical depression could form by early next
week several hundred miles east of the Lesser Antilles.
* Formation chance through 48 hours...low...near 0 percent.
* Formation chance through 5 days...medium...60 percent.

Models have it fishing after ~120 hrs, which is common this far out, but we should watch as it approaches the Lesser Antilles.

2. A broad low pressure system is producing a large area of cloudiness
and shower activity several hundred miles west-southwest of the Cabo
Verde Islands. Environmental conditions are not expected to be
conducive for significant development of this disturbance during
the next couple of days while it moves westward at about 15 mph
across the central tropical Atlantic Ocean. However, conditions are
forecast to become more conducive for development over the weekend,
and a tropical depression is likely to form by early next week
several hundred miles east of the Lesser Antilles.
* Formation chance through 48 hours...low...near 0 percent.
* Formation chance through 5 days...high...70 percent. 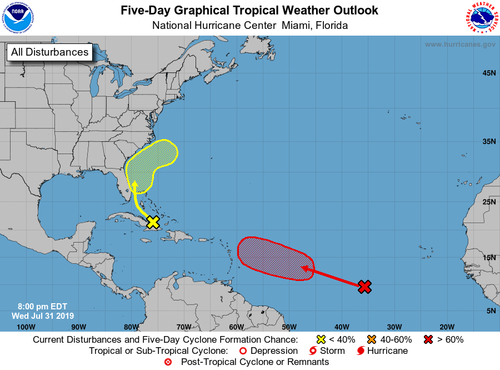 Moderate confidence exists for a tropical cyclone to possibly form over the western Gulf of Mexico between August 21st and 27th. 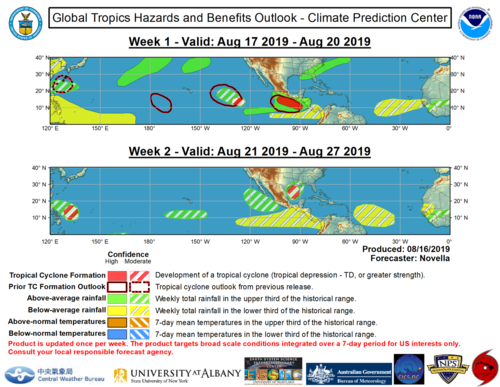 1. Surface and radar data, along with satellite imagery, indicate that
the low pressure area just east of the coast of southeastern Florida
is becoming better organized. The low is forecast to move generally
northwestward near or over the eastern Florida peninsula through
tonight, and then move northward to northeastward over the Atlantic
near the east coast of the central Florida peninsula on Saturday.
After that, the system is expected to move northeastward offshore of
the southeastern United States coast. If the current trend
continues, a tropical depression is likely to form by Saturday
night. Regardless of development, locally heavy rains are possible
over the northwestern Bahamas and the southern and central Florida
peninsula through the weekend. Interests in the northwestern
Bahamas, the Florida peninsula, and the southeast coast of the
United States should monitor the progress of this system. An Air
Force Reserve Hurricane Hunter aircraft is scheduled to investigate
the system on Saturday, if necessary.
* Formation chance through 48 hours...high...70 percent.
* Formation chance through 5 days...high...90 percent.

2. Recent satellite wind data indicate that a low pressure area has
formed in association with a tropical wave located about 1300
miles east-southeast of the Windward Islands. Additional
development of this system is possible during the next few days, and
a tropical depression could form late this weekend or early next
week as it moves generally westward to west-northwestward near 15
mph.
* Formation chance through 48 hours...medium...40 percent.
* Formation chance through 5 days...medium...50 percent. 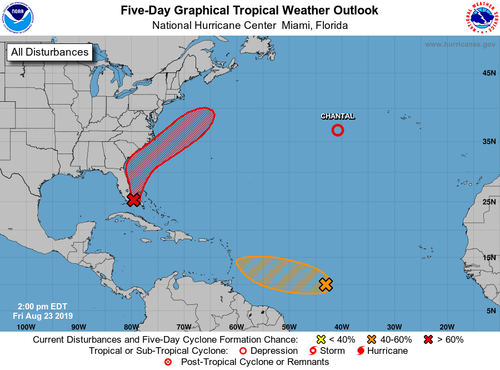 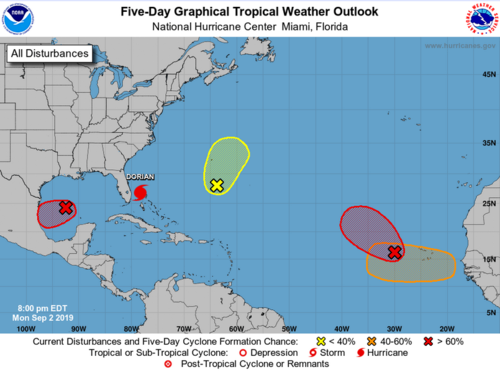 With Hurricane Dorian bearing down on the coast of Florida and possibly moving up towards Georgia and the Carolinas over the course of this week, seeing these other disturbances is nothing less than disquieting. What is especially concerning is the probabilities for Disturbances 1 and 4, both located off Cabo Verde, which have the highest probabilities for further development and intensification. As it would seem, the season has kicked into high gear. The only question I have now is whether we're ready for what has been let out of the box.

I’m no tropical weather expert, but based on pattern recognition I don’t see the Cape Verde system being a threat to the islands or the US mainland. The system is already moving northwestward, so if its latitude increases north while it’s that far out east in the Atlantic, its path shouldn’t be much of a threat. But others can correct me if I’m wrong.

We are inside the climatological peak period right now, and the activity has certainly increased accordingly, with a total of four systems of interest on the NHC site this morning. I would venture a guess that this is *the* peak right now, and we will already start on the “downhill” side of this peak as we go through the rest of this week. Of course, that doesn’t mean there won’t be more named storms, and as we all know, it only takes one...

James,Tues. 8-27, the NHC had Dorian reaching Florida as a 70mph Tropical Storm, on 8-31...
Sat.,it was a Cat 5 just east of the Bahamas.
Still, at this present time, numerical models run 'poor' this far out,w/ tropical entities.
Reactions: Justin Z.

Looking at the latest, That one by Mexico is now a tropical storm (Fernand), but they don't show it reaching hurricane strength.
And the red X sorta near Africa - now labeled as Eight(why don't they just keep numbers instead of names? lol numbering would make more sense to me), they're showing that becoming a TS wednesday (to be named Gabrielle?. doesn't look like it'll be anything to worry about if the track they show actually happens). .... but still thats be 2 more named storms.
The other red area off Africa, they say has a 70% chance of becoming a tropical cyclone within 5 days. Maybe that one could be one that bears watching?

Reviewing the model runs, the GFS has the future Humberto/Imelda doing virtually the same thing as Dorian, which seems kinda fishy to me. While, the Euro model has it dissipating at 120 Hours, wonder why?

Kevin R Burgess said:
James,Tues. 8-27, the NHC had Dorian reaching Florida as a 70mph Tropical Storm, on 8-31...
Sat.,it was a Cat 5 just east of the Bahamas.
Still, at this present time, numerical models run 'poor' this far out,w/ tropical entities.
Click to expand...

I agree Kevin but my post at the time was really based not so much on forecast but on the fact that the disturbance was already moving NW. I felt it was going to be at a latitude that was too far north, while the storm was still too close to Africa, to ever be on a typical Cape Verde hurricane path that threatens the islands or US.

As a sidebar note.... The models are showing Invest 94 (AL94) moving in a favorable direction over the next 10 day. The GFS shows it becoming a tropical cyclone and the NHC discussion calls for a 70% chance of formation over the next five days. Looks like this will be the next possible chase, though a long way out. I believe we will see at least one major Gulf event over the next 30 days.
Reactions: Andy Wehrle

The GFS has a wicked sense of humor. Fantasy land at over 300 hours, but something to watch. 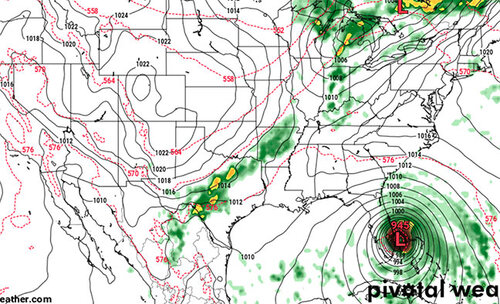