My uncle in Murfreesboro, North Carolina passed away on Saturday, and my trip to attend the funeral services would take me through West Virginia - on a severe weather day in the state, as it turned out. The setup actually wasn't that bad - a decent compact shortwave with 40-50 knots of southwest flow, clear skies ahead of the wave, MLCape north of 1,500 and CAMs agreeing on at least transient supercells in eastern Kentucky and Western WV by late afternoon. The main limiting factor was meager surface flow, not uncommon with any event in the Appalachians.

I started the on-the-way chase in the Lexington, Kentucky area as a few supercells spun up south of the city and tracked east just south of I-64. The terrain and roads here get progressively worse the farther east you go, and I had no good options to intercept. By the time I made it to the lead storm, it was dissipating - continuing my monthlong chasing trend. I jumped back on I-64 ahead of a messy cluster of disorganized storms, noting an outflow boundary left by an earlier afternoon storm in the vicinity of the interstate. As I pulled ahead of these cells coming into Charleston, the northernmost one rapidly intensified.

I came around the Fort Hill Bridge - the one I spent many winter weather events shooting icy road footage - as my phone went off with the tornado warning. Sirens began sounding downtown - something I had never heard in all my years I lived here. As the storm came into view, storm structure that will likely not be seen at this location for another 50 years or more came over the hills. And right under the meso, an ominous bowl lowering showed something was going on under it! The RFD precip raced into the valley in dramatic fashion.

Not being able to stay very long thanks to the long drive to NC still to go, I spent the next hour doing a quick survey of the damage on the east side of town, which appeared to be RFD related. The worst damage I saw was in Shadowlawn, my old neighborhood, right on the street where I used to live. Half of a large sycamore tree crashed down onto a car right in front of my old house. 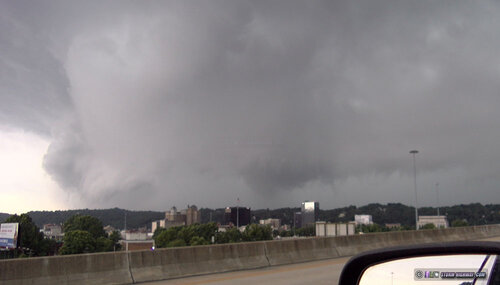 RFD precip racing over the ridgetops down into the Kanawha valley: 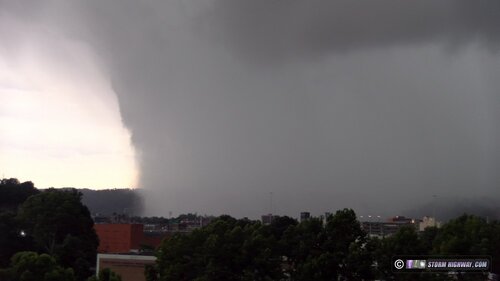 Video of the storm and the aftermath:

Update: I finally had some time to sit down and pull radar images, maps and my position on this day, and it appears that the feature in my photos above is NOT the tornado shown in the NWS survey. The tornado look-alike feature was at least a half mile east of the tornado track surveyed by the NWS.
You must log in or register to reply here.
Share:
Facebook Twitter Reddit Email Link
Top Bottom