I caught a couple lightning bolts this afternoon that occurred in a winter thunderstorm in which the main precipitation types were graupel (snow pellets) and snow. Not too often you can catch the bolt even when you do get such storms, but I was positioned just outside the heavy precipitation area and was lucky enough to catch these. Temperature was in the mid-to-upper 30s. Here are pics of the bolts: 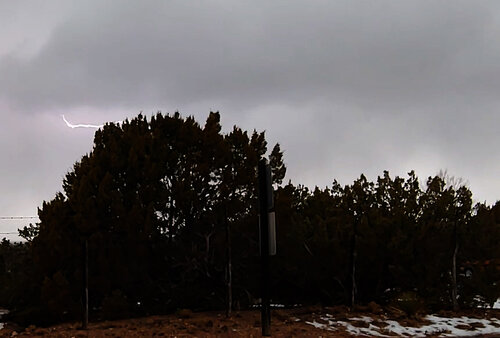 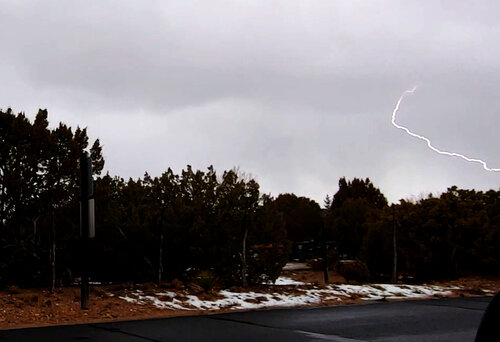 I got these on the northern fringes of Santa Fe near route 599 around or a little after noon. Then another storm moved right over the central part of the city around 1 p.m. with more graupel and snow accompanied by thunder and lightning. I got video of that second storm, too. Both storms were in narow, fast-moving lines so not much accumulation, although there was just enough to make the roads slippery for a little while. Video coming when I get time to do the necessary editing, but that won't be for a while. Will post again when it is available.
Reactions: Marc R. O'Leary, Jason Boggs, Ethan Schisler and 3 others

After considerable delay due to holiday travel and other competing commitments, I have finally completed my write-up on my observations of these storms. Hopefully, I have somewhat made up for the delay in getting it done with the degree of detail in the write-up. It includes video, photos, radar images and a radar loop, and discussion of the setup that led to these storms, as well as discussion of how winter thunderstorms and thundersnow tend to occur in different forms in mountainous areas like New Mexico and Colorado from other parts of the country. You can see my write-up and the related images at: