My original plan for this day was to drive to Sedalia junction, MO then drive east just ahead of the line of eventual storms and watch individual updrafts as they crossed Interstate 70. I was dissuaded from this by 3 things: all models holding off convection until after dark, the insane Thanksgiving traffic already making the roads crazy at midday, and CAMs persisting about a lead line of supercells potentially peaking in the St. Louis metro sometime between 10pm and midnight. By the time I left for my chase at 8PM, traffic was starting to calm down. I drove up to Wentzville, MO to watch the first storms in the metro area, but they stopped producing lightning about 30 minutes before arriving. After that, a strengthening line of storms was taking shape south of I-44, appearing to align with the activity the CAMs had been hinting at. I ended up a mile from my apartment just after 10pm watching this approach. It too stopped producing lightning as it got to within 30 miles of me. About 15 minutes later, a supercell structure on radar emerged (more impressive on reflectivity than velocity). That was the only thing you could call successful about this chase, that I managed to be in a tornado warning. With the storm about 10 miles out, lightning started up again to provide a partial view of what was going on - but no structure of interest was visible in the flashes.

This was my lightning-illuminated view of the tornado-warned storm at New Baden, looking in the general area the circulation was on radar. 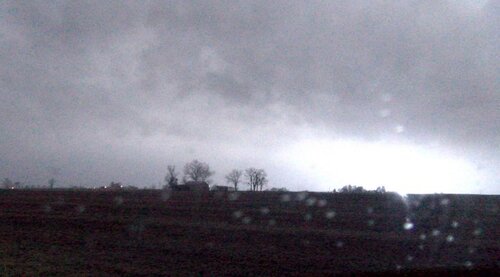 I had zero plans to chase this day, but was on my way back home from Springfield on business when the southeast portion of my county got a tornado warning for a discreet cell south of Joplin. I had to drive a whole 5 minutes out of my way to end up underneath the storm but it had really taken a beating by that point and the warning was cancelled shortly after I got there. All I had to show for it was a great view of some Christmas lights. We will do anything to chase this time of year. ha
You must log in or register to reply here.
Share:
Facebook Twitter Reddit Email Link
Top Bottom