(Hoped a thread for this event would already exist)

Sunday September 29th was a low key marginal risk and yet as Illinois events sometimes go, it ended up being much more. While arm-chairing conditions with a couple chasers, a supercell in western Illinois wasted no time getting that 'look' for which we wondered if/when it would be warned. Eventually it was so be that it was en route for an easy intercept, I headed out of Decatur into Logan County. For being stale by the time I was close, I figured it would be gusting out and cold but near Emden it displayed an impressive hook despite it's own surging rfd. As such, a weak tornado (later rated EF0) was observed that as my luck would have it, shriveled away right as I was in position to shoot. The rest of the afternoon was spent surfing this storm through picturesque bean fields located along 136 into Mclean and Dewitt counties. A highlight was having the opportunity to meet a few other legit chasers amidst the throngs of muggles that is simply a sign of the times. Makes one appreciate the days when no one cared about Illinois weather 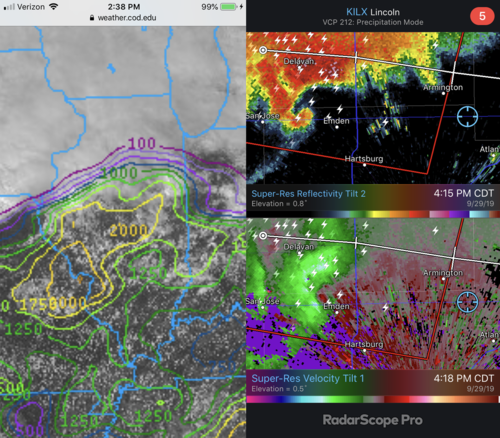 Last few seconds of rope out 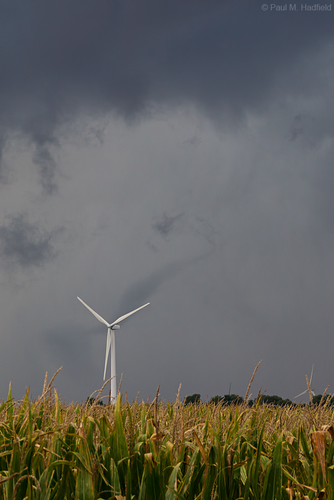 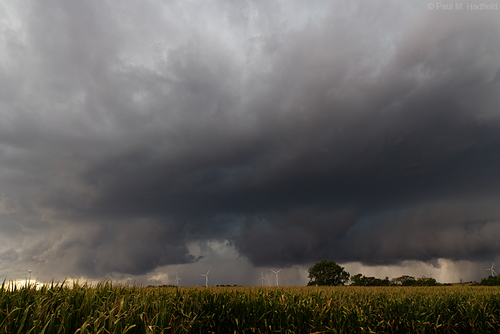 Left side tried wrapping up but was rudely undercut 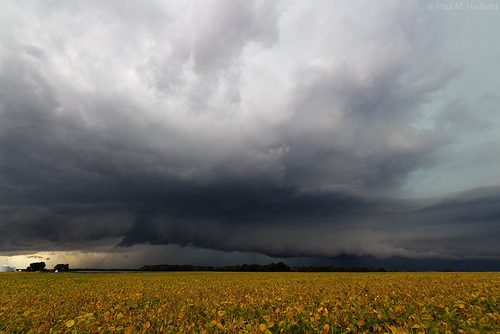 Outflow dominate from here on 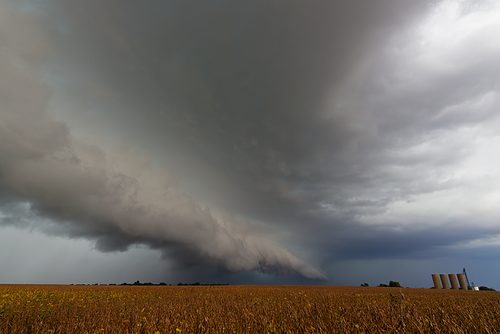 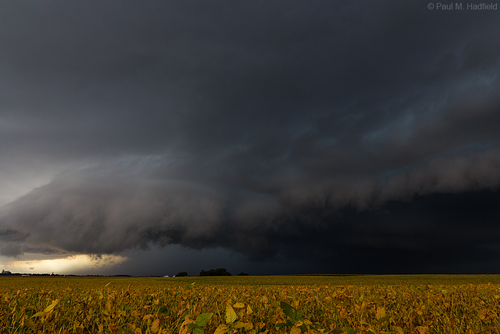 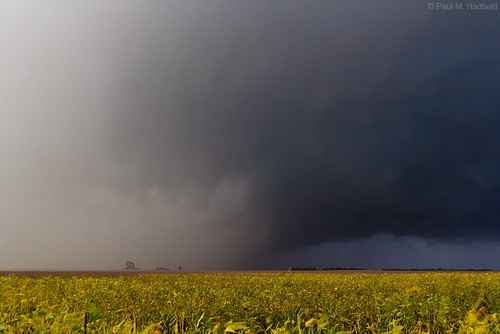 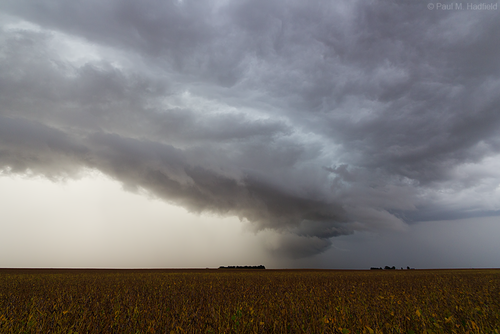 It took me a month to notice this thread. I'll post some of my results from my chase with Nick Krietz.

Nick drove to my place north of Chicago from Michigan expecting to head to South Dakota for an event that, had it initiated, would have been a pretty epic fall day. As it turned out to be hot garbage (pun intended), we instead headed to western Illinois, stopping in Macomb for a cheeseburger and considering our options. Given that elevated storms had pushed off an outflow boundary that was shoving the warm front, which would later prove to be the focus for supercells, further south, one option was to head home, and that's what we did. It was the earliest I had ever called off a chase and as we drove through rain and thunder back toward I-80, I reminded myself that my biggest cardinal rule of chasing is never to do exactly what I was deciding to do. Thus, we turned around, and as I considered whether it would be worthwhile to chase a gust front further away from home all day from behind, the early morning LLJ began to weaken and the boundary began to slow its southward propagation. I realized just how shortsighted I had been.

On radar, I noted exactly what the HRW suite had pegged 48 hours leading up to the event - a line of storms with a sharp southern cutoff. It took a solid hour to correct our positioning, but we got back in front of the line, now a severe storm. The tail end of this line was elevated, but it was developing supercellular characteristics. Seeing the storm approaching the boundary, the NWS in Lincoln prematurely tornado warned it as it passed through Lewistown, but despite the fact it was ugly and not yet surface based, we were there for the thunder and sirens. Finding a rare clearing along the river, I took this photo to reassure friends of mine in central Illinois that no, they were not yet missing the show. 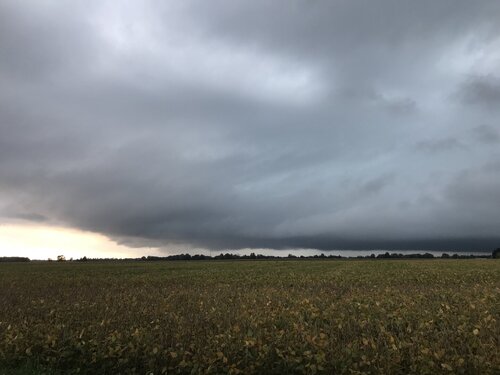 We crossed the Illinois River and entered the heavenly chasing grounds of central Illinois. The storm's southeastward motion allowed it to find the boundary east of Havana, and I reported that this storm was now, in fact, drawing in surface based inflow. Within about a half hour, this blobby, barely surface based HP supercell had turned into a classic storm with a good looking SVC, suggesting that moisture and vorticity was streaming into this storm and things were ramping up. 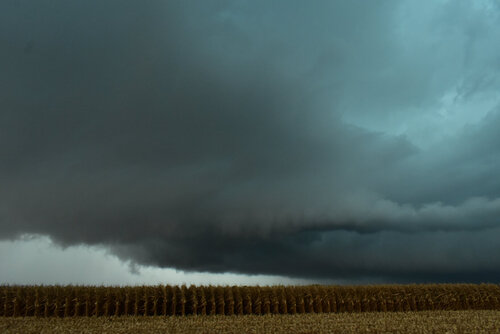 It was around this time that this storm tightened up and the rotating wall cloud that had developed in front of us spun into what I am convinced was an extremely brief, weak, and inconsequential tornado within about a quarter mile of where we had pulled up looking south. Put on your spectacles for this one. I didn't even notice it until reviewing video later. 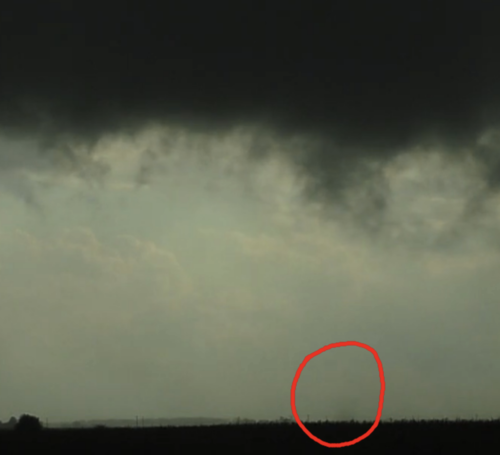 As we stayed ahead of the storm, we noted at least one more funnel. 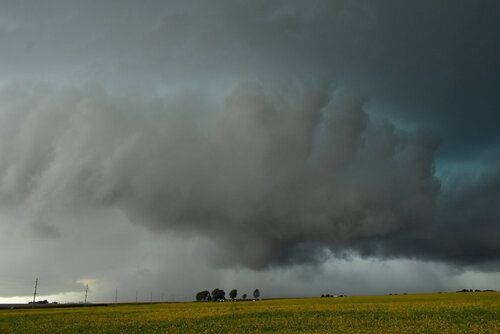 This storm that developed in the early morning in Missouri as an elevated rain shower had now been surface based for over an hour, but it hadn't produced. It had, however, begun to produce some of the strongest positive lightning that I have ever been around in the midwest, an experience that I think parallels June 22 of 2015 and 2016. It was remarkably loud and all around us, and this was one of those chases where standing the car was downright dangerous. This kind of storm is the most exciting and most fun out there.

After another cycle, the storm was ready to go. We took advantage of one of the gifts of chasing in the midwest - paved roads everywhere - to stay within hundreds of yards of the rotation, moving forward about a mile at a time before stopping and waiting. The rotation was strengthening each time we stopped and I knew that a tornado was imminent, and finally the RFD clear slot opened to reveal that the rotating meso we had been focused on was in fact a shapeshifting trunk tornado. 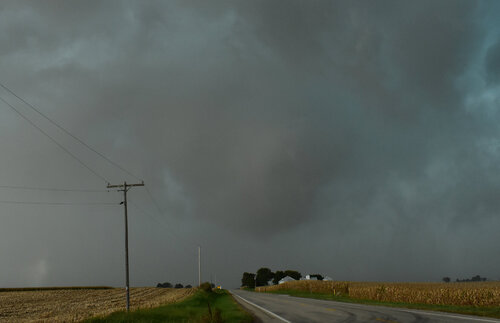 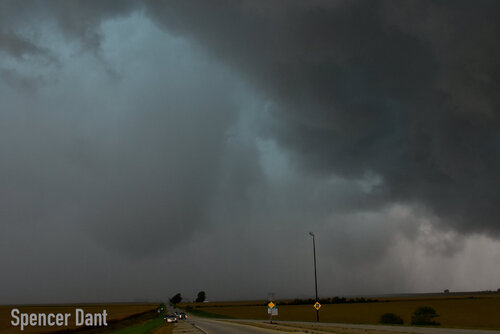 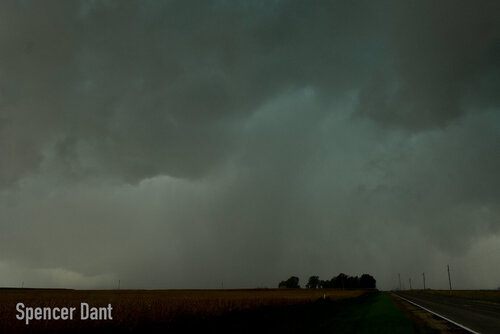 The occlusion of this tornado seemed to tear the connection between the boundary and this storm. It went outflow dominant, and we hung out with it for another hour or so as it tried and failed to reestablish itself before heading back home, running into Paul and a few others on our way out. 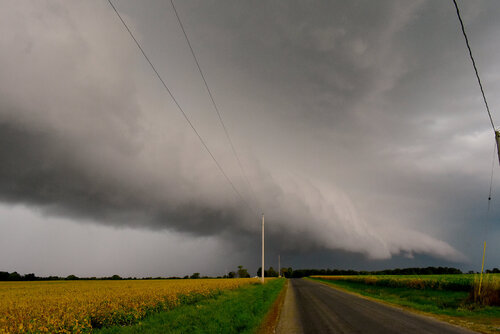 Video from the day:
Note: as it turned out, we chased for about 3 hours. Our drive home was about 2.5 hours. Had we gone home from Macomb, our drive home would have been about 4.5 hours. All in all, even if nothing had happened, chasing only cost us an hour.
Reactions: Paul Hadfield
You must log in or register to reply here.
Share:
Facebook Twitter Reddit Email Link
Top Bottom