Figured I'd make a thread for this day since I had a pretty good chase in Iowa. I left around 2p from Omaha and headed up I-29. A little after 3p initiation occurred in northeast Nebraska just to my west with a broken line forming pretty quickly. I stayed ahead of the line into northwest Iowa and eventually the northern most cell broke off from the line so I chose that one. Found a gravel road just northwest of Anthon and watched a nice rain free base on the storm. The storm moved slowly to the northeast to my north. Eventually a pretty nice wall cloud formed with some decent rotation to it to my north by about 1/2 mile. It looked like it was really going to try to drop a tornado, but new development came in from the southwest and both blocked my view with heavy rain and seemed to choke off the rotation.
I repositioned back to Hwy S31 and headed northeast towards Correctionville.
The storm seemed to recycle and now I had a view of a nice base to my southeast with a lowering developing. I pulled over just south of Correctionville and had to wait for some pea sized hail to pass over before being able to get out and observe the base to my southeast. First thing I noticed was something pretty odd. Looking to my east was a very thick cover of trees. Under the base of the storm was an area of interest with a lowering that was slowly moving north. Out ahead of this lowering to the north I noticed "scud" rising right out of the trees at ground level. It didn't seem to be rotating or connected to anything above at the base of the storm. This area drifted north and dissipated. Any idea what this would be/cause of something like this? It made me think of the video I saw from earlier this year in Oklahoma from the high risk day of the newscopter footage of this happening as well.
At any rate the storm was moving off to the east so I needed to catch back up to it. I took Hwy 20 east while watching a really nice wall cloud form. This wall cloud was very beefy and had rapid rising motion on the left side. It looked like it could have dropped a big tornado at any moment.
I dropped south near Cushing on a paved road with the idea I would find a road a few miles down the way to head east on. Unfortunately for me the county roads in this area seemed to take on a lot of rain from this storm and I just didn't trust them enough to take them in my little Nissan Altima. The last thing I wanted to do was have my trip end early because of getting stuck.
So I ended up backtracking to Hwy 20 to go east putting me out of position for a while unfortunately. About this time the storm dropped a confirmed brief tornado near Ida Grove which I could barely see off in the distance. A couple of other cells further south were tornado warned now as well and one dropped a confirmed tornado relatively close to Omaha in western Iowa. Oh well, can't be everywhere at once I guess.
I met up with another cell near Cherokee, IA that wasn't too impressive so I started driving home. It was now after sunset and I was treated to a great light show from the ongoing storms. It was pretty awesome as the skies around the storms were completely clear so I had a great shot of a night sky filled with stars and the towers of the storms lit up with near constant lightning. I stopped and took some pictures of this and then on the way home driving down I-29 I did something I've never done before. I stopped on a few of the overpasses over the interstate and took some long exposure shots of traffic on the interstate with the storms/lightning in the distance.
Didn't see any of the brief tornadoes, but it was nice to get out in September for a chase. Now I need to decide if tomorrow (9/29) is worth the chance....

Here's a short video of my chase. Please chime in if you can tell me what the feature is that is rising out of the trees! 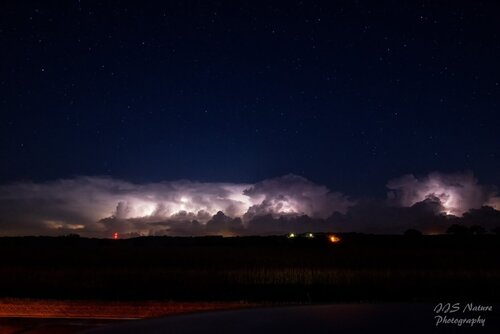 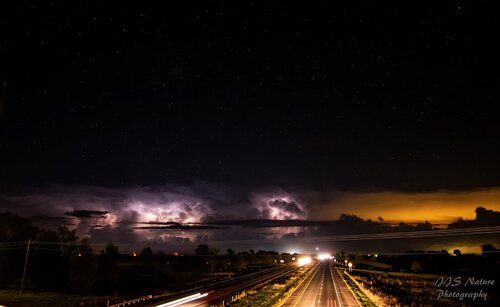 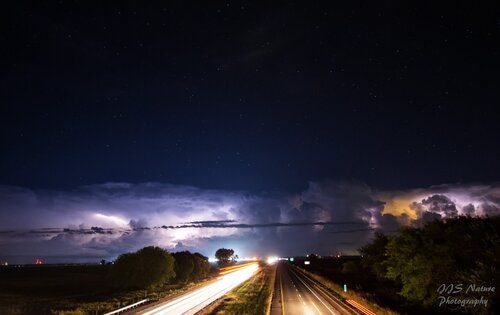 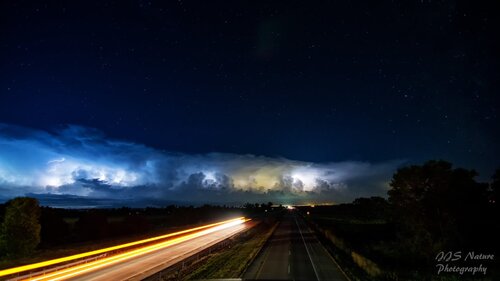