An incredibly marginal day that was seemingly massacred throughout the warm sector by widespread morning convection and poor recovery ended up cranking out one of my favorite tornado sequences ever, and I chased it in work clothes.

Ahead of the meandering cold front, a capping inversion kept convection to a minimum. I targeted the Illinois-Wisconsin border where some sort of differential heating zone had set itself up. This pseudo-boundary had a north-to-south component to it but nosed further west of Lake Michigan around here, so I thought a storm had the best chance to go up, mature, and briefly produce before heading out over Lake Michigan and obviously out of my range. The first storm to go up was closer to Milwaukee, so I drove northward, watching from a distance of about 20 miles southeast with it moving toward me. It was powerless and generally looked pretty sad, but the low levels were okay and it had a fair shot before it swept out over the lake. 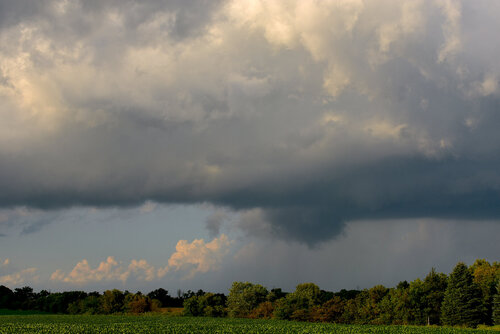 In the meanwhile, I had been watching an updraft grow and fizzle in the ballpark of my initial target in far southern Wisconsin. I headed south to meet it, conveniently narrowing my distance to home if it failed to blossom. It took its time, and as the path of the storm crossed with mine it was only worth following out of sheer boredom and the fact that I was at most 10 minutes from home if it didn't turn out to be worth it.

The storm slowed to a slightly closer to reasonable 40-45 knots as it neared Lake Michigan and I noticed that the base had some shape to it. I've lived here in northeastern Illinois long enough to know what the lake breeze can do - storms interact with cool surface air in the nearshore environment, begin to spin, and take on some cool structural shapes. That said, they're usually harmless. I was going to follow it - if nothing else, it was directly ahead of the cold front, so I could watch it over the lake for some quick waterspouts. This one skipped that phase and instead quickly formed a bowl shaped meso over land, taking on classic supercell characteristics in the lowest kilometer. Within minutes, I had reported this rotating meso to the NWS in Chicago via Twitter, a report that I'm sure fell on reasonably deaf ears given the nonexistent radar returns and generally anemic nature of the "storms" that day to that point. The storm, though, had come together. 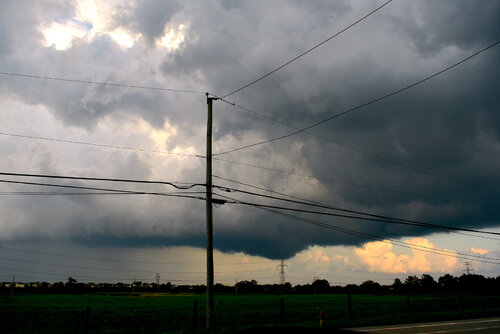 The clearing I found in order to take this photo turned out to be where my chase ended as I never moved again. There was no need. 60+ knot 500s kept the base clear of precip, and the prospect of taking on a town of 60,000 during rush hour in order to position closer was just not worth it. With the lake three miles to my east, I knew I would see anything that happened, provided it happened within the next 15 minutes before the storm was gone from view.

Video from a resident of Waukegan, Illinois showed an uncondensed tornado crossing a busy intersection at approximately 6:42 PM. One video showed it flipping a car; another showed it hitting someone in their car. I took this photo at 6:41 PM. This is likely the exact moment this tornado touched down. 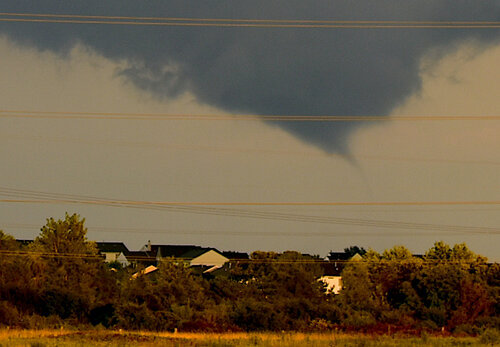 Fortunately, this tornado took about 3 minutes to complete the remaining 2 miles of its march to Lake Michigan. Were the following sequence to occur on shore on the north side of Waukegan and into Beach Park, we would be discussing a significant, potentially violent, yet unwarned tornado in a heavily populated area not built to withstand such an event during the rush hour on a weekday. These photos were all taken between 6:46 PM and 6:49 PM. 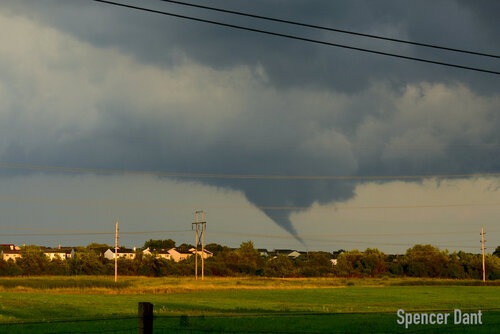 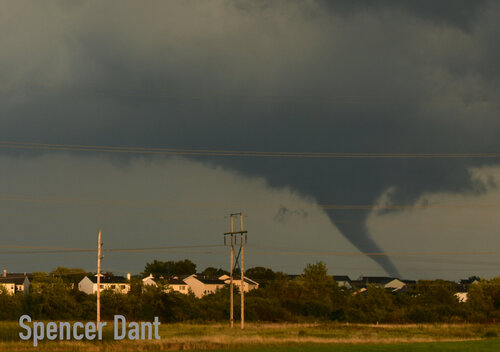 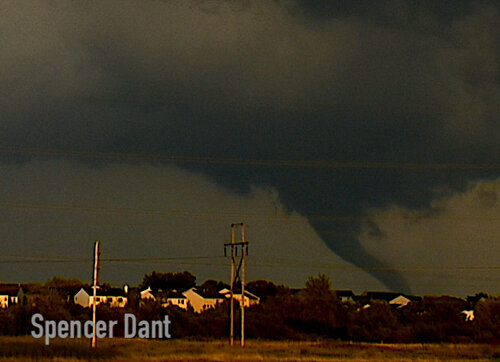 Despite being a tornadic waterspout, this tornado was mean. The motion was intense, far more than the low-end EF1 rating on land would suggest. Instead of roping out and dissolving, it simply developed an anticyclonic sister, which briefly condensed and then died. While it looked as if that was the end of that, it did not manage to take down the cyclonic twin. Instead, a new mesocyclone began to develop on the back side of the older tornado. Both grew fairly large, and while my view of the horizon was cut off and the distance between myself and the storm was pushing 10 miles, I honestly think that this photo might be my favorite of the day simply because it shows the raw ferocity of this storm that barely warranted a radar return just 20 minutes ago. 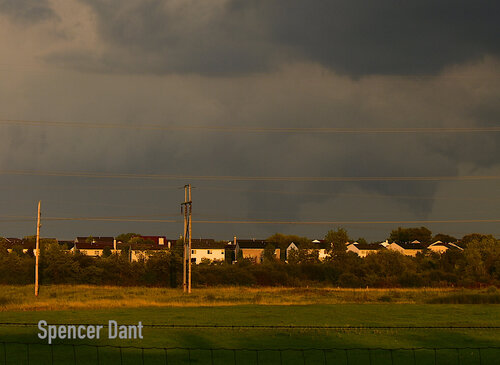 I have no doubt that this storm continued to cycle as it went out over the lake. I need to buy a boat.

The tornado that traversed along the Waukegan-Beach Park edge officially touched down under 3 miles from my apartment. My drive home from where I sat and watched this transpire was 6 minutes, and that was while seemingly hitting only red lights. I don't think I could beat that mark, and I certainly don't want to anyway.

Here is one wide shot for the road, showing a fairly weak updraft with at best barely healthy cumulus but a big RFD cut and a classic tornado. 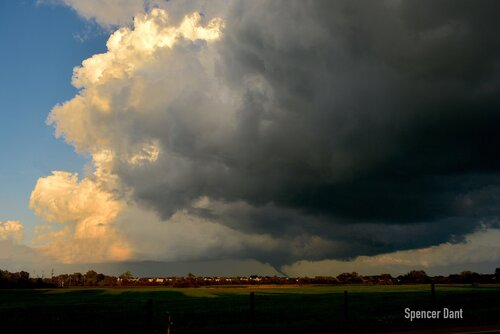 Do you know why the SPC storm reports shows nothing for that day? I was in southern Michigan waiting on what was a weird day as far as figuring out if anything was going to transform and it got pushed way late. It seemed to look like I would get a rare chase day in Michigan, then it would look unlikely, then things would start to show promise again. Storms just wouldn't initiate ahead of the front and even along the front that seemed to come way later than I expected to start the day, so later that night I gave up, went to spend time with my grandfather. I don't really chase at dark anyway, even as one last sliver of hope came about as it was getting late. I was sitting at my grandfather's, watching the two main cells coming over the lake from our phones, the one you saw must have been the one that came on shore around St. Joseph/Benton Harbor on the Michigan side. It stayed strong over Lake Michigan and had tons of lightning as they moved on after dark.

When it came on shore it took a minute before they put it under a severe thunderstorm warning. I wish I would have snapped the picture, but I had a radar shot on a really crappy radar that never shows any supercell characteristics or anything, and on the Michigan side it was an extremely impressive looking cell with what looked like a hefty hail core and the perfect classic supercell with the hook. No tornado warning was ever issued and I was a few counties away from the storm and didn't have any quality weather accessories available where I was. But I was amazed at what a radar that will show a tornadic supercell as a circular blob, showing a storm that looked like the ideal, classic supercell. I was equally amazed at how quickly it dissipated after moving 40 or 50 miles onshore.

It was heading directly at where I was located and it went from impressive looking and severe warned a couple times, to literally nothing well before it got to where I was, at about the halfway point between Lake Michigan and Lake Erie. I was expecting to see tornado reports the next day and the day on the SPC page shows no tornado reports for anywhere in the nation that day. Clearly you have shown that the cell produced before it even got to the lake.

Why is there no tornado report? All it has is some wind reports from the storm where it came on shore and held up for probably no more than an hour. I am also curious as to why some storms seemed to instantly die or never get going and in other parts further north and even one just south of the Michigan line started ramping up a little after midnight. I know there was some left over storm and cloud coverage from the night before and it never warmed up to where it was supposed to, but where I was, we missed out on the overnight storms and didn't get all that much cloud coverage. It just was a day that was predicted and played out in a way I hadn't really seen before. I am used to days busting while chasing in the southern Michigan area though lol. And the few times I pinpointed the right area, I bailed on it early and didn't trust my assessment to keep going further from home, missing out on my chances to see a tornado. I need better resources and/or a chase partner that knows what to do, because I can't stand not driving.
Last edited: Sep 10, 2019

I remember thinking maybe there would be some action in SW Michigan that day as well. I was excited considering how the storms on the 29th over-performed. Nothing got anywhere near producing a tornado that day, but there were a couple nice slightly-elevated HP supercells north of GR at one point. Storm initiation/maintenance is always unpredictable near Lake Michigan though. I don't know if the shortwave that was supposed to trigger convection over Wisconsin really verified on the 3rd. I think there was model discrepancies on coverage and SPC was hedging because with the kind of shear and instability parameters that day anything that did go could potentially go bonkers. There was so much shear around, yet nothing really held together for long. Not having a dryline or up-slope flow to initiate convection makes things more difficult. A cold front alone is almost never enough in the Great Lakes.
Last edited: Sep 30, 2019
You must log in or register to reply here.
Share:
Facebook Twitter Reddit Email Link
Top Bottom