The first in a series of days that will likely produce severe thunderstorms and isolated tornadoes across the Central Plains vicinity began in eastern Colorado.

Today looked like a marginal chase day with deep layer shear that was borderline supportive of a few transient supercells. The original plan was to see if a robust storm could push off of the higher terrain and sustain itself. One storm looked like it might do that, just west of Simla. I dropped south for a look at the storm, but it appeared to be a bit outflow dominant and did not have much noteworthy structure after its initial stages. 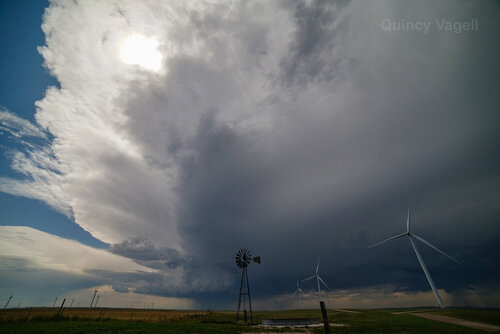 I meandered to Punkin Center, where I finally regained cell phone data (radar and internet access). I was tempted to bail east, but wanted to be sure I was making the right decision before I darted away. I noticed to the east-southeast that there was some agitated cumulus. Mesoanalysis showed that there was a swath from far east-central Colorado toward southwestern Kansas/Oklahoma panhandle that was conditionally favorable for severe storms, perhaps even a tornado or two.

I go to Eads as one cell (I'm not sure I'd call it a true supercell) began to split. One cell turned left (north), while the other seemed to be nearly stationary, just north of Eads. This storm threw out some marginally severe hail and showed some mid-level rotation, but despite a tornado warning, it never looked like it was going to produce.

I started to head south toward a hotel in Lamar, when new storms pulsed up again. I went up close to inspect hail, which was as large as 1.25 inches in diameter. I toyed with rushing back north toward Kit Carson to investigate a new, more intense supercell, but with daylight fading and not wanting to continue to drive back and forth, I went back south. It turns out that a brief tornado was observed with that storm.

https://twitter.com/i/web/status/1165074861036728320
Farther southeast, a supercell in the eastern Oklahoma panhandle triggered multiple tornado warnings. This storm, along with others from eastern Colorado toward northwestern Oklahoma, appeared to form near and/or interact with outflow from earlier storms.

Much farther northwest, a brief tornado was also reported in central Wyoming. As of this time yesterday, I was leaning toward targeting northeastern Wyoming, but the setup kept slowing down and pushed the target area too far west into more rugged, mountainous terrain.

The coming days should feature at least localized severe potential across the northern/central Plains, as a seasonably strong upper level jet translates from the Pacific Northwest to the Northern Rockies and eventually impinges on the Plains. As far as my chase year is concerned, this will likely be my last multi-day trip, so with prospects of chaseable setups in the Plains in late August, there is no way I will pass this opportunity up.
Reactions: Jeff House, Bob Schafer, Rocky Rascovich and 2 others
You must log in or register to reply here.
Share:
Facebook Twitter Reddit Email Link
Top Bottom