What a day. I forced myself to go to sleep early last night, but in anticipation of today, I was up by 2 a.m. I ended up leaving Oklahoma City by 4:30 and that gave me enough time to get to northeastern Colorado with about an hour to spare. With prospects of 3000+ CAPE with 40+ knots of shear in Colorado, I was cautiously optimistic about what the day would have in store.

I watched the first few echoes go up in Yuma County early in the afternoon and decided it was best to stay put, even though I toyed with the idea of possibly targeting the cluster coming out of Nebraska. Needless to say, I did not do that.

A pair of cells evolved into supercell structures with prominent wall clouds, to the southwest of Wray. At first, the northern cell looked dominant, but it suddenly started withering away, giving way to a more classic-looking supercell to the south. I managed to get back to US-385 just in time to dart south and then west on US-36 for a closer look. I watched a tornado from start to finish, even though I was not particularly close. The rough estimate was that the tornado lasted about 7-8 minutes or so and toward the end, there was about a minute with two tornadoes side-by-side. (Low resolution screenshot below) 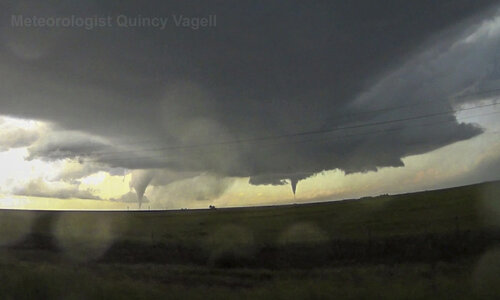 The initial (main) tornado began to rope out shortly after its twin lifted. I did not manage to stop for any photos, as I was getting rained on pretty hard, power lines were in the way and I was hoping to intercept the storm as it moved south. I have some video (not the best quality), but it does cover the vast majority of the life cycles of the tornadoes.

I chased the storms for a while, but after the initial tornadoes, the setup was generally messy. I closed in on a rain-wrapped, occluding mesocyclone north of Bethune, but with questionable road conditions and very large hail, I got back south to avoid getting stuck or a busted windshield.

It wasn't much later that the storms were throwing out quite a bit of outflow and the tornado potential decreased. I didn't get much footage worth sharing, but I noted several gustnados and/or quasi-landspouts along surging outflow, but most of these features were relatively short-lived.

The day ended in Sharon Springs, just in time for a mammatus-filled sunset. 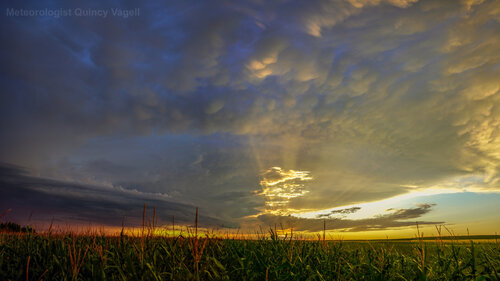 For the first time since late May, I saw a tornado and even though I was not particularly close, I cannot pass up a tornado in August. I've had better luck chasing in Colorado lately, but I think part of that is from learning from past mistakes. Convection often initiates earlier than guidance suggests and that was the case again today. Even though the CAPE/shear parameter space was very impressive for Colorado, as often happens when there's large CAPE in Colorado, storm modes became messy fairly quickly.

All in all, it was an exciting chase and the setup for tomorrow, August 14th, looks very similar. Consider this round one of two.
Reactions: Jeff House, GPhillips, JamesCaruso and 7 others

I saw the forecasts for today, and in particular noted the CAPE/shear values & mention of a dryline.
I'd brought my tablet along to work & brought up the radar in the afternoon to see multiple storms & warnings. (storms were way to far for me to go see in the evening when I got off). After I got home I checked in on the radar every so often. (find it interesting to watch storms progress).
- certainly was an active afternoon/evening out there.

The forecast discussion said there would be an outflow boundary that could create more storms when it hit the mountains. (That I was anticipating, being pretty near the mountains). I sorta watched the outflow boundary make its way across on radar. There was one storm that fired up not far from me before the boundary got here, and it passed right overhead (not severe) so I got some rain & alittle thunder. After it passed, I watched it on radar. it was headed northeast & the boundary was headed west...I thought "this is going to be interesting to see what happens when they meet". Turnes out that it wasn't, the storm basically died & that segment of boundary just kinda disappeared.
Don't know if the pic's I took turned out, but it was a cool looking storm at sunset after it passed!

A few storms did fire up later on farther north where the boundary met the mountains (just like the forecast said) One got severe-warned (& still is, but the storms are shrinking now).
There is some pretty good lightning north of me (too far to hear any thunder). I just went out & tried videoing (a smaller/closer storm). Hard to say ofcourse if it'll even turn out.

Atleast I got to see some bit of stormy weather today. Hoping for more tomorrow.
Reactions: Dan Robinson

The decision to chase came very suddenly. I was on my throne at 8:30 am looking at the day's high res stuff (y'all do that too, right?) I'm always a fan of upslope flow in the High Plains, and that's exactly what this was. By 9:15 I was leaving my house in Amarillo and drove straight north. If I could've shaved an extra 15 minutes, I would've had front row seats to the tornadoes near Joes, CO. But I was fashionably late coming north out of Seibert. Saw the first white tornado from Cope, CO looking northeast. Stopped to take a couple of photos and record video. 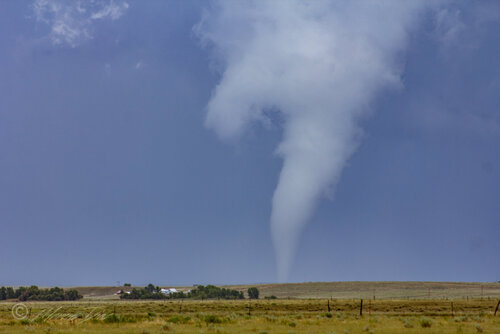 I did see the second tornado come down but my contrast from the west was terrible, and I could barely see the second tornado as the first was in progress. I got just outside of Joes when tornado number 2 made a full return. I watched it for a few minutes as it roped out with a spectacular backdrop of the updrafts and anvil of the storms further northeast. 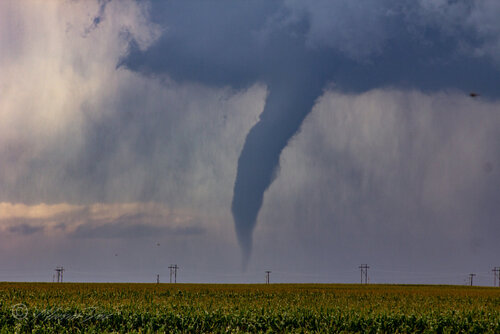 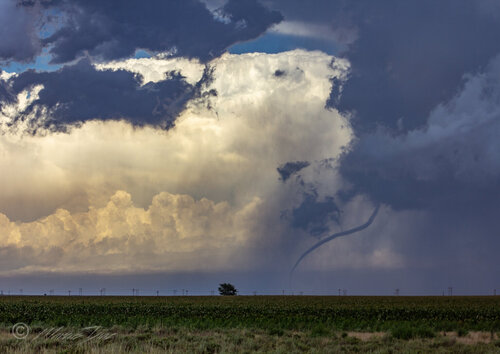 After watching the tornado roped, I continued to follow the storm south. Saw a 3rd multi-vortex tornado north of Stratton, CO with a rapidly rotating wall cloud and small vortices dancing on the ground underneath it. Finally got down to Cheyenne Wells, where it was pretty evident the entire complex was outflow dominant, so I made my way home. Very impromptu but successful chase.
Reactions: Jeff House, GPhillips, JamesCaruso and 12 others

James K said:
Don't know if the pic's I took turned out, but was a cool looking storm at sunset after it passed!
---
lightning north of me. I just went out & tried videoing. Hard to say ofcourse if it'll even turn out.
Click to expand...

The evening storm pic's turned came out good to me (note that I just have a general camera, nothing fancy/expensive, so 'good' bay differ in other's views)..I'm attaching one here
Also attaching a frame-grab from video of the one of the night storms cloud lit by lightning (didn't turn out great, I'm not sure if there's settings on the camcorder I can change to do better at night/lightning)

I could not bring myself to head for the primary warm front target between Peoria and Davenport, partially because models had been hinting all along for a lead storm to get going farther south around Decatur. This was reinforced more and more by each model run, and with cumulus fields up north looking meager, I saw no reason to leave home. I needed a nap anyway due to being out for near-constant storms and flooding since 10pm the previous night (Monday). Finally at 7pm storms initiated along I-72 from Hannibal through Springfield, and I headed north on I-55 just before sunset.

A lone storm went up to the west near Troy, Missouri, producing a nice crepuscular ray display: 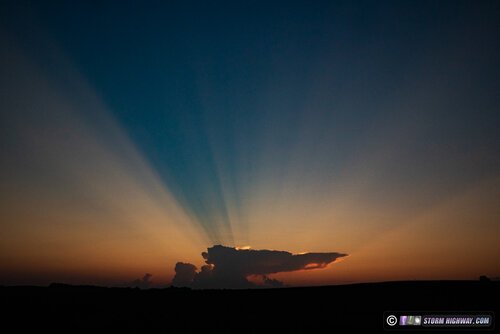 The storm just east of Springfield was slightly south of the rest of the cells on I-72, and looked like the best candidate to produce a tornado along the warm frontal zone. I diverted northeast to Pana to get ahead of this, but thanks to the high corn and trees, I never had a visual on the base when it produced its tornadoes near Assumption. I arrived on the storm at Shelbyville, but by then it was lining out. CG lightning was intense, but none cooperated for my cameras.

I headed back home, but only briefly as even more storms were heading for St. Louis. I caught this bolt at 4AM at the Arch: 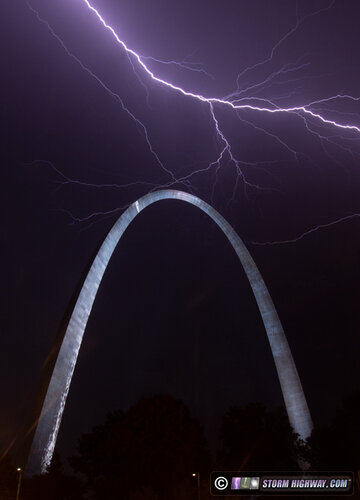 I returned home, but not for long, as yet again another round of storms was approaching at daybreak. I didn't see anything with this round, and ended my nearly 36-hour chase (with a couple of short naps in between) at 10AM Wednesday.
Last edited: Aug 15, 2019
Reactions: Paul Hadfield, Jeff House, James K and 5 others
You must log in or register to reply here.
Share:
Facebook Twitter Reddit Email Link
Top Bottom