With a SPC 5% chance of tornados in Colorado in August, it seemed to me to be a great setup, especially since it was close to my house and a weekend!

I've been waiting for an opportunity like this to take my 5 year old boys storm chasing again. All of the decent setups in July occurred during the week, and I didn't have any vacation time left after my chasecation in May. Because one of them had already been out with me twice (Jeremiah), and the other one had only been once (Jaydon), I decided to make it fair by only taking Jaydon. So Jaydon and I jumped in the car around noon, while my wife took Jeremiah to a movie.

I left from my house near Colorado Springs around noon, with an initial target of Sterling, CO. When I got to Limon, I took time to get a radar update and chase via radar from there. There was a tornado warned storm northwest of Limon, near southeast Denver. It was tempting, but it was in the wrong area. All of the other chasers were on it (based upon spotter network). I told my son they were all wrong, and we needed to head northeast instead (where the shear was). I saw a tiny cell just starting to form near Akron, so I put Akron in my GPS and off we went.

While we were driving, the storm southeast of Denver lost its tornado warning, and eventually its severe warning. Meanwhile, the Akron storm went severe warned, and when we were about 30 minutes away, it went tornado warned. Suddenly a long line of red dots was following me east along 36 and north on 63. My son and I were so excited to be at the head of pack - in the lead - a good 30 minutes ahead of anybody else.

When we got to Akron, I decided to go east along 34 and follow the tornado warned storm. Unfortunately the pitfalls of chasing with a 5 year old in the back seat caught up to me, and we had to stop for a rather long potty break. By the time his potty break was done and we were gassed up, we were now in the middle of the pack. Luckily the chaser convergence wasn't too bad, but there police were out in full force, slowing everybody down. It's frustrating driving 30 mph in a 65 because there's a cop with its lights on ahead of you swerving to keep anybody from passing. I really thought he was going to block the road, but luckily this was Colorado and not Kansas. So we continued onward, although slowly. The good news is we were really close to area of rotation and the storm was moving slowly, so the 30 mph wasn't too bad.

Since the storm was moving so slow, I decided to stop and take about 2 minutes of video of really convincing looking RFD scud. There were 3 amateur storm chasers or possibly locals in the same area where I was taking video. They all got excited when they saw a "professional" show up... until I started saying quite loudly to my son, "No son, that isn't a funnel cloud. It's just scud that looks like a funnel." Everyone got sad looks on their faces and got back in their vehicles and drove east.

Alright... so a few minutes later I'm back on the road driving east along 34 and looking for rotation. I felt like I might have been getting ahead of it a little bit, so I decided to pull off to the side of the road near Otis, CO and stop to look around (since my view was limited to mostly the front of my vehicle while I was driving). As soon as I stopped and looked around, I saw this just behind me:


Once the tornado dissipated, I decided to focus on the rotation ahead of me. I drove to Yuma, and then took 59 north. OOPS! I was so used to the fast moving storms from May, that I totally overshot it and ended up in between two cells. The cell to my west had just dropped a tornado, but my view was now blocked by rain - that was approaching me. And the cell to my right was looking good, but wasn't quite well enough formed yet. I watched the cell to my right for as long as I could, but eventually the rain from the western cell started hitting us.

I initially decided to continue driving north and pull in behind the storm again as it passed to my south and east. But again... I forgot that this was August and the storms were moving slowly. I realized that I was going to end up on the northern edge of the storm. So I stopped to re-access, and noticed some large hail on the ground. That's when I got this great photo of my 5 year old holding a 2" hail stone. 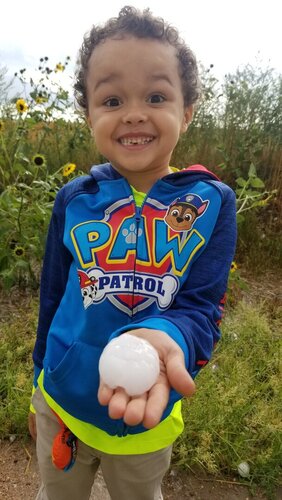 Eventually I decided to head back down to Yuma and go east along 34 to Wray, and then north on 385 to get back into position to see the storm that was still tornado warned. Once we got to Wray, it was time for another bathroom break. Once we were done with that, another look a the radar showed the storms starting to fall apart. To make matters worse, it was now 6pm, and I had to get home to go to work the next day. So at that point our chase was over, and we headed home.

Overall it was a great day, and I'm so happy that Jaydon got to see his first tornado. He had trouble seeing it, and at the end of video he explains why... "But I thought tornados were supposed to be BROWN!"

I got suckered into that first warned storm, mostly because it was 10 minutes from my house...but i sat on it too long. My original target was Yuma, but once the wife decided to come along, the logistics change. Solo I can go where and whenever after a storm, but with my new chase partner, the range and mobility gets limited.

In any case, we had fun and saw some great structure for an August chase here in CO.

I was out on a non-chase vacation last week. I started out the day in Alamosa and headed out in time to see the Denver storm from a distance.
After I crossed into KS, I stopped at the rest area near Kanorado. Something was going up to my west, so I went into Goodland and headed north on 27. I hung out at 27 and County Road B for a while, and then the lightning increased significantly. After a few more minutes I headed back to Goodland and east to Brewster, then heading north before stopping about 15 miles out of Brewster. At this point the storm had been tornado warned for Bird City, and I think it had expired. There was some nice structure that reminded me of the Imperial NE storm on 5/27. Made it worth the trip; 700 miles on the day and got into Salina just after midnight. 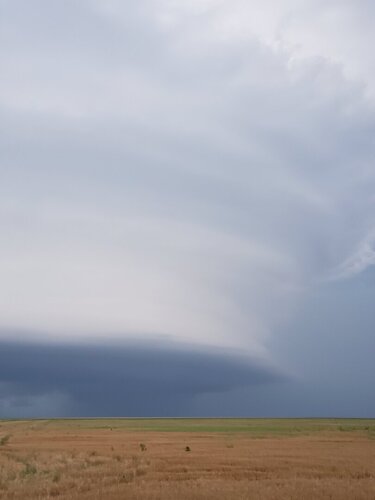