Had a fairly nice chase yesterday evening, when I wasn't expecting to chase at all. Was able to photograph two separate severe storms SE of Macomb, IL both producing prolific lightning and wind gusts over 70 mph at times. I watched part of the topping of a large machine shed blow off with the first storm, which power then went out afterwards promptly. The second storm had awesome structure for being outflow dominant, although it did make an attempt at producing in a kink in the line, assuming when it interacting with a boundary from the first storm. A wall cloud developed, but became quickly undercut. Lots of flooding and cars in ditches from the high winds later ensued, which made for a chaotic drive home Here are a few of my captures: 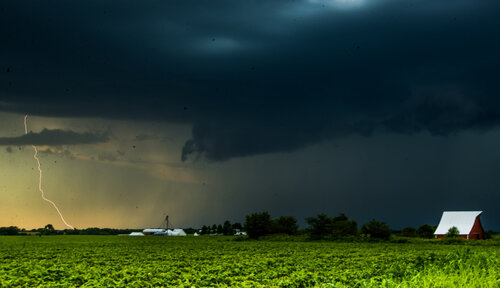 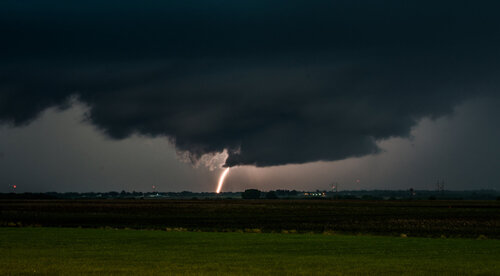 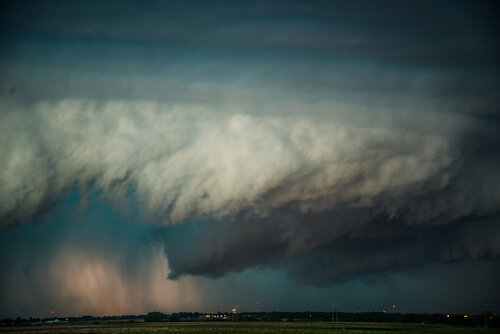 Second storm with a developing wall cloud, there was a rotational couplet to my NW by about 4 miles at this time, so it definitely gave it the 'ole college try 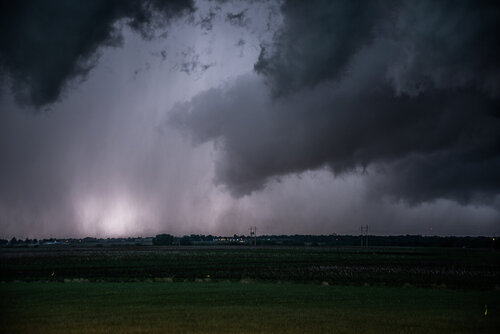 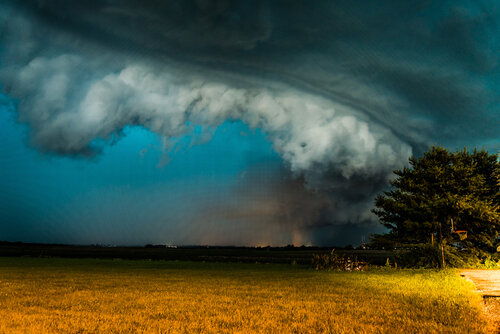 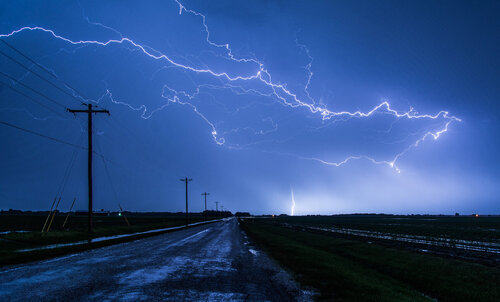 Mods may want to add NE/KS to the title and possibly IA, WY as well.

I had an initial target of north-central Kansas, where the southern fringe of favorable upper level flow was expected to juxtapose with large buoyancy. I did not have high expectations going into the chase, but a window opened up for me to chase and without such openings in my schedule for a while, it was hard to say no.

Initially, I sat near Bennington, KS to keep both the northern target (closer to I-80, where low-level flow was backed) and the southern target (better low-level moisture in northern Kansas). Convective initiation started early in the afternoon, as expected, in south-central Nebraska, so I adjusted north. A cluster of initial storms briefly intensified, but they were moving farther east that I could afford to go and I was fairly certain that new storms would develop farther west, eventually.

New storms did fire close to the WFO for Hastings. One storm pulsed up and briefly evolved into a bona fide supercell. I closed in on a relatively narrow, rotating updraft, but the updraft was quickly being overtaken by surrounding convection. 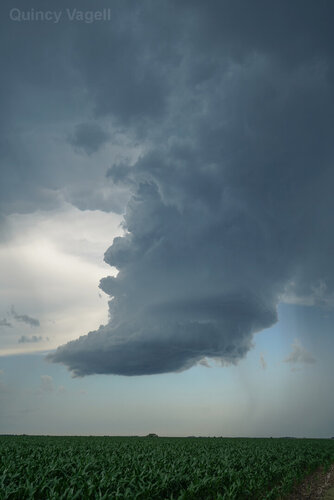 I did not realize it at first, but a much more intense updraft had formed to the west. Based on radar data, it appeared as if it was an outflow-dominant cluster of storms, rather than a true supercell. Satellite imagery highlighted that an intense updraft was evident, even if ground observations were a bit muddled from nearby convection and other mid-level clouds.

I watched the storm approach in a field, just north of the Kansas border. Mammatus could be seen all around the storm, making for quite a scene. The mammatus wasn't particularly high contrast, but there were a few photo opportunities before the accelerating convection approached.

The next move was to drop south into north-central Kansas. I decided to get ahead of the storm and pick a place to stop for photos. I felt that I handled this chase really well, especially compared to some other chases this year. Knowing this was a one off (after having a day off following an 8-day stretch of chasing), I had to give it my all. I could tell from the start that the tornado threat was relatively low. This allowed me to take a step back from the storms to have what I consider to be some of my better photo opportunities in my chase year, to-date.

Courtland, Kansas was going to be my "home" for the bulk of the chase with the outflow-dominant convective cluster. I found a spot near some train tracks and watched the storm approach. There was some lightning, but nothing particularly vivid or noteworthy to share any footage of. I wasn't paying close attention to radar, instead, just enjoying being one with the environment. 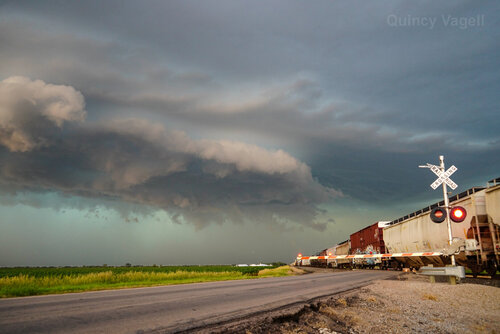 What I did not know was that the convection had, briefly, evolved into a robust supercell. Just as this was happening, a train was approaching from the southeast. The timing was just about as good as possible, as the train crossed the roadway, just as the supercell, which was showing some better low-level rotation, approached. The train stopped shortly thereafter and as the cars stopped, I briefly thought the train might be reversing direction from the storm, but it is more likely that the it was just the cars bouncing back in the opposite direction. The storm was producing large hail, so I wouldn't want to be any vehicle, including a train, driving into it.

I dropped south ahead of the storm, but almost as quickly as it morphed into a supercell, it was once again taking on more of a quasi-linear, outflow-dominant structure. I attempted to stop for a few photos once back in Bennington, but it was getting dark the the storm structure was becoming increasingly low contrast.

Overall, this was one of my favorite chases of this year. I chased in two states, tracked storms for several hours and had good photo opportunities with two different storms, in two different. It's also true that I only saw maybe three or four other chasers during the other chase, so I largely had the storms to myself.

As much as I have expressed some disappointment in this chase season, I have to be thankful that I have had quite a few photogenic storms to track. Sure, there have not been a lot of high contrast supercells in open country without hoards of chasers around, but there has been no shortage of photo opportunities. My big thing going into this year was getting use out of my new camera (a7iii) and even though I've struggled to find photogenic tornadoes in 2019, I've had quality photo opps in the vast majority of chases this year.

I will chase again this year, but it's likely that this will go down as my last storm chase in June 2019.