Chase Summary: June 19 was yet another interesting chase day in northeastern Texas, with a tornado warned supercell intercepted late in the day. The area being targeted was from northeast of Dallas and east / northeast towards Paris north of the I-30 corridor. The SPC had an enhanced area for a large portion of Texas, with a 10% tornado probability in northeastern Texas, and larger area of 30% wind and hail probabilities (both hatched for significant) on their 1630z and 20z outlooks. I left Oklahoma City via I-40 / I-44 to I-240 east to I-35 south into Texas, and east on Highway 82 out of Gainesville towards Sherman, Texas, stopping there for lunch and to change out a broken turn signal light. I continued east towards Highway 69, and south and east on there into the target area for initiation north of Farmersville and Highway 380. The forecasted target area was spot-on, as well as the SPC issuing Mesoscale Discussion 1136 and subsequent tornado watch box 401 for a large area valid until 12 AM CDT the following day. A large supercell storm was tracked from near Merit and into Hunt County, and across Greensville with a possible rain-wrapped tornado there observed at close range. I continued south and east on Highway 380 to Highway 69, finally bailing on the storm northwest of Emory, Texas. Roads and terrain became too challenging there, as well as the supercell evolving to HP mode. I backed down and headed up FM 275 to I-30, then west on there back towards the northeastern side of the Dallas metroplex. I took I-635 to Highway 75 north out of Richardson, and spent the night in Plano, Texas.

Storm Interception Details Are Below

June 19, 5:30 PM - Observation and indirect penetration of a very severe and possibly tornadic thunderstorm over Hunt County, Texas from north of Farmersville near Merit, and near Highways 380 and 69, and past Greensville to near Emory. The storm was an HP supercell storm, that was observed from near its point of initiation, and the majority of its life cycle. This storm had a powerful mesocylone, with strong rotation with wall clouds / funnels, especially early in its life cycle before becoming more outflow dominated and / or "rain wrapped" HP. Tree and sign damage was observed with this storm, and part of the weak tornado may have been penetrated on the southeast side of Greenville along Highway 69, with airborne tree debris observed and "tagging" rain curtains. Other conditions were winds over 75 MPH, heavy rains, frequent lightning with some close hits, and hail to 2". The main core, with baseball sized hail, was not directly penetrated. Documentation was digital stills and HD video. Conditions causing the storms were surface heating, an outflow boundary, a low pressure trough, and upper trough. A 2016 Jeep Wrangler was used to chase the storms. A tornado watch was also in effect for the area until 12 AM CDT the following day. 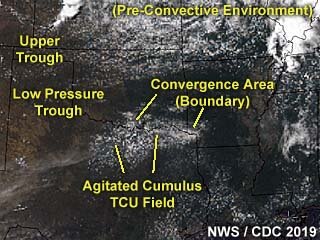 Above: This is a visible satellite image of the pre-convective environment near the target area during the 18z time frame on June 19, 2019. The annotated image shows the synoptic features of the setup, with a developing field of agitated / towering cumulus along a convergence area / boundary in north-central to NE Texas. 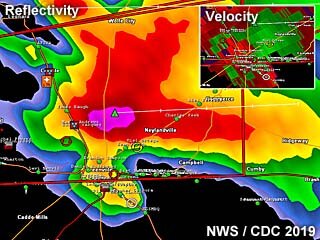 Above: Base reflectivity radar image of a tornadic HP supercell storm as it neared Greenville, Texas late in the day on June 19. The storm has a prominent "hook echo" forming on its SE side and a velocity couplet in the upper-right inset. 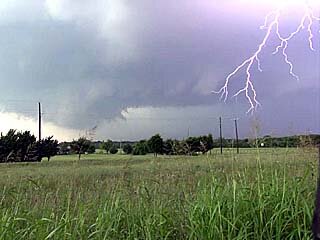 Above: Intense lightning and rotating wall cloud as the storm intensifies and begins rotating west of Greenville, Texas on June 19. 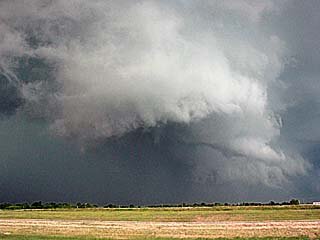 Above: View of a funnel cloud on a rotating wall cloud to the west of Greenville, Texas during the afternoon of June 19. 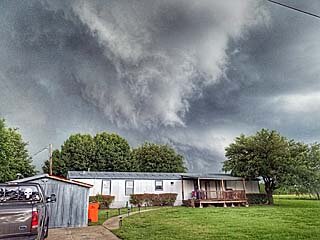 Above: A rotating wall cloud / funnel can be seen here as it passes menacingly close to a trailer home west of Greenville, Texas during the afternoon of June 19. 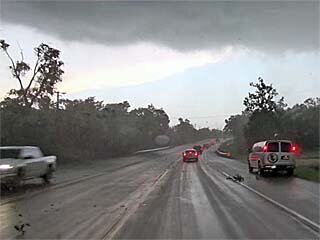 Above: View of flying tree debris and strong winds associated with the eastern side of a possible rain-wrapped tornado while racing southeast out of Greenville, Texas during the afternoon of June 19. The view is to the southeast. Note the chase tour van stopped to the right. Winds are gusting over 70 MPH here. 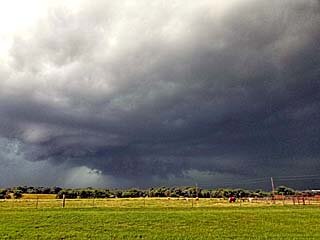 Above: Looking back west into the "notch" of the HP supercell where a large wall cloud can be seen. A brief view of a possible large rain-wrapped tornado was also spotted by Roger Hill's tour group from this location late on June 19.

Note: For DETAILS on this storm / setup as well as others in June 2019 … Please visit the link BELOW for more information!