I targeted the San Angelo, TX area for the potential for a few supercells near a bit of a dryline bulge. There were a few early day (midday) supercells farther northeast, but those storms quickly merged into a line and weakened before I even seriously considered perusing them.

One semi-discrete storm later developed near Sterling City. It pulsed up and briefly showed some supercellular structure with a bit of a wall cloud, but it weakened relatively quickly. On its southwest flank, another storm developed. This one struggled to intensify at first, but then also evolved into a supercell. This storm showed more mid to low-level rotation than the previous storm, even if that was relatively brief. 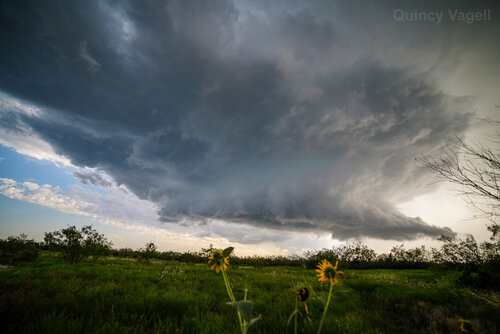 I stayed with the storm as it dropped southeast, but as soon as it crossed over TX-163, I headed back north. The plan was to get into position for chasing (today) and perhaps I would see some noteworthy storm structure on the back side. I stopped when I saw a rainbow in the distance with a horse on a small farm and felt that was a good place to stop for a few photos. As I got out of my car, I noticed stray hailstones on the ground, generally golf ball-sized, but a few were a bit larger. The horse seemed okay. 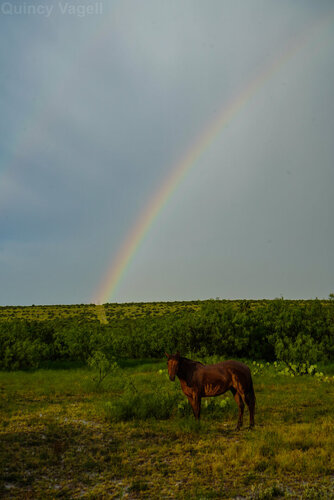 This was a case of large buoyancy making up for a lack of both deep layer shear and stronger low-level flow. CAPEs were analyzed in the 3000-4500 J/kg range where the storms developed. Deep layer shear was barely marginal, around roughly 25-30 knots. Multiple storms fired up in the large buoyancy reservoir, but tended to weaken/cluster fairly quickly. A few storms that persisted into early evening farther southeast, near I-10, did further intensify as the low-level jet increased. I could have stuck around, but I wanted to keep Colorado in play for today, so I opted out.