I had my eye on Tuesday for a while, debating on whether or not it would be a setup worth chasing. Leading up to the event, it was clear that a narrow axis of favorable shear/instability would be in place and that any supercell threat would be fairly conditional. (This post will discuss the mesoscale environment and subtleties that led to my decision/target areas, so you might want to skip down to the bottom of the post for photos and the actual storm chase itself. One thing I am trying to do this year is spend more time analyzing borderline/marginal/conditional setups, in order to hopefully have better success rates in the future)

Tuesday morning, I stayed in Oklahoma City, reviewing data and waited to make a move. The HRRR, which initially showed isolated storm development in south-central Kansas, wavered back and forth between convective initiation (CI) and a cap bust. The 3km NAM, on the other hand, was fairly consistent with convection up and down an axis from central Kansas to the Texas panhandle.

A deeper dive into the surface analysis by mid to late Tuesday morning suggested to me that the end result would likely be somewhere between the two solutions and favoring at least isolated CI. While the NAM was fairly aggressive with pushing dew-points up to around 60F, the HRRR was about 5F lower. When I saw that dew-points were quickly rebounding into the mid and upper 50s, it was clear to me that there was a good potential for CI, most likely between the eastern Oklahoma panhandle and southern Kansas.

https://twitter.com/i/web/status/1138560188171149314
My initial target was unclear. I went to Woodward, OK to keep an array of targets open. I was intrigued by the eastern Texas panhandle for a time, where there was some moisture pooling and temperatures were quickly rising into the 80s. The issue here was that stronger upper level forcing would be coming in last minute from the northwest and initiation south of the Oklahoma panhandle was highly questionable.

I review an array of model data leading up to a chase and could not totally discount the NCAR ensemble, which showed a clustering of rotating storms in the eastern Texas panhandle. The highest confidence for storms was farther northeast into southern Kansas, but here I was mildly concerned that storms would form on the fringe of a narrow axis of favorable instability, leaving uncertainty. With storm movement expected to be fairly slow at first (<25 knots), I had time to wait.

By mid-afternoon, temperatures were rising into the mid to upper 80s from the eastern Oklahoma panhandle to the Meade/Clark County, KS vicinity, which based on near-term forecast soundings, was at or very close to the forecast convective temperatures. Agitated cumulus was noted by 5:30 p.m. along a broad axis from central Kansas into the Texas panhandle. I watched several updrafts attempt to take off to the west of Ashland, KS, but over time I became less and less confident that these updrafts would amount to anything. I strongly favored the southern most storms to fire and although a storm initially went up near Spearville, to the north, I figured I had time to wait.

With time ticking and the storm near Spearville taking on supercellular structure, it was time to adjust east and north. It was just about 7 p.m. by this time and if I was going to have a legitimate shot at chasing a storm for any length of time prior to sunset, I needed to move, quick. I approached the storm and had a visual on a relatively low contrast, elevated cloud base to the north of Greensburg. I watched the storm for some time and lightning activity began to increase, but at the same time, a few other cells started to pop up to its immediate southwest. 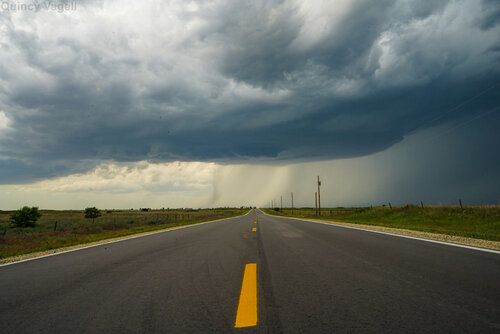 Just as the Greensburg (initial) supercell looked to be getting its act together, visibility of the storm base was becoming obscured by other storms on its southwest flank. I almost decided to blast east to get closer to the Greensburg storm, but time was running short and I figured I would probably have better photo opportunities if I went south. By this time, sunset was quickly approaching, so there was not a lot of time left for daytime photography.

Near Coldwater, the southwesternmost storm produced a quasi-LP updraft. This was timed nicely with mammatus in the distance, so when I found a place to pull off the road, I took out my camera. After chasing and essentially losing the initial, more dominant supercell, I was encouraged by this turn of events. The storm, which probably wasn't even a true supercell, was enough to leave me satisfied with a conditional and almost busted storm chase. 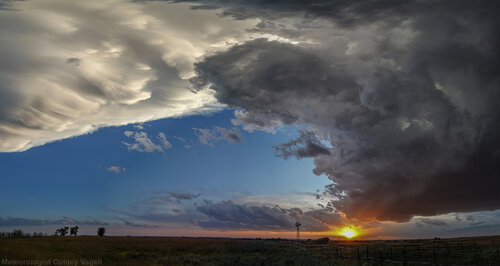 I continued south toward the Oklahoma border as the sun went down. There were a few more photo opportunities near Buttermilk, just north of the border.

I moved south with the intention of heading home, but the initially lackluster (although visually appealing) storm started to show some signs of lower level rotation. I briefly had a visual on a ragged wall cloud near Lookout, OK, shortly after sunset. It was too little, too late, as despite lowering LCLs and an increasing LLJ, the storm never really became fully rooted at the surface. It was quickly evolving into an elevated convective cluster. I followed this cluster just about to I-40, before turning east to head home to Oklahoma City. 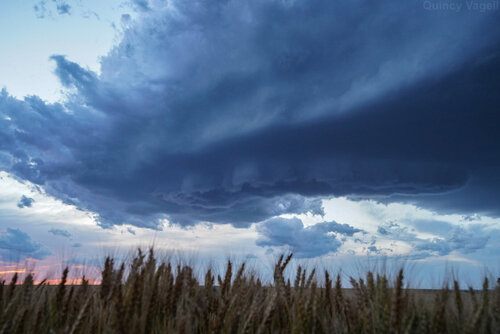 From a high resolution modeling standpoint, the end solution was indeed somewhere between the array of scenarios being portrayed. The waffling HRRR was too pessimistic with boundary layer moisture/heating, which the NAM was too aggressive. The NCAR ensemble did not pick up on the maximum of storms in southern Kansas, but there was a last minute storm that fired around sunset in the Texas panhandle. The HREF was also biased a bit to the southwest as well. It was a rare time in which the 18z 3km NAM arguably outperformed the HRRR in the short-range. This is a good lesson of not getting too hung up on one model solution. It is always good to review the various models and compare their outputs/initializations to what is actually happening. I enjoy nuanced chase setups like these, as they are great opportunities to to study, watch, observe and hopefully learn.
Last edited: Jun 12, 2019
Reactions: Jeff House, JeremyS and Dan Robinson
You must log in or register to reply here.
Share:
Facebook Twitter Reddit Email Link
Top Bottom