Finally getting around to posting this, just to complete my chase vacation documentation for posterity’s sake...

My chase partner had gone back home to take care of some business during the lull, the theory being that if he did so he could extend his trip longer at the back end beyond his originally scheduled time away. I had been hanging around in Wichita (caught a great 80s hair metal cover band the night before!). My chase partner’s flight to Wichita was delayed and he had not arrived at the hotel until 3am. For the long trip to NM, leaving Wichita at 8am was about the best we could do.

Not only because of the time, but just to keep the total number of hours’ driving within some realm of reasonableness, I figured we would just try to make it to northeastern NM and take our chances there, even though southeastern NM was the real target area. It was already 5pm MDT and we were somewhere around Wheatland in NE NM. There was a storm out near Vaughn; I’m pretty sure it had a TOR warning at some point and maybe even a TOR report. Although it was already late and we had said NE NM was about the furthest we could (or would) go, I knew this storm would move east into an environment of veered winds. Meanwhile, there was another storm down near Roswell that would be moving into an environment of better moisture and backed winds. Despite having been in the car for 10 hours already, we decided to head south.

By the time we got down to Lovington, it was already 5:47 MDT. 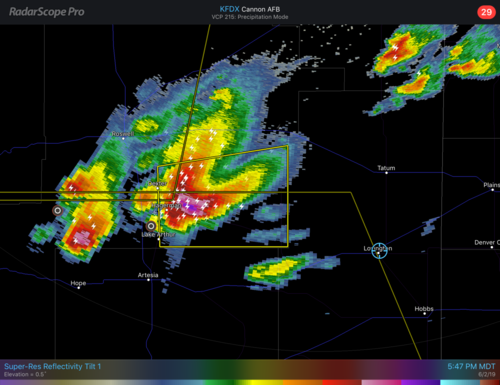 As we continued west to intercept, what had been an isolated storm began to be surrounded and enveloped by new convection. 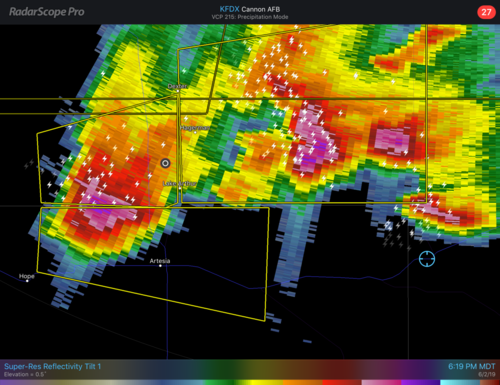 We decided to target the westernmost cell near Artesia. It was a nice view of the updraft as we drove; love the “rainbow” up in the anvil blow-off! 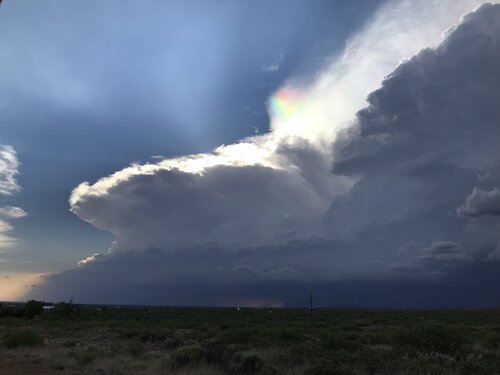 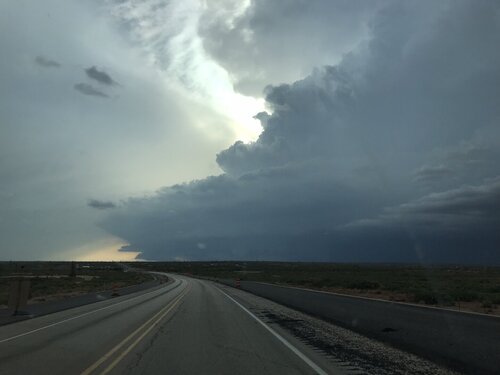 Knowing tornado chances were slim, we stayed at a distance, east of Artesia, for structure, photographing from an oil field. As the storm approached, it became outflow dominant and we played cat and mouse with the gust front for a while, staying with it until dark. 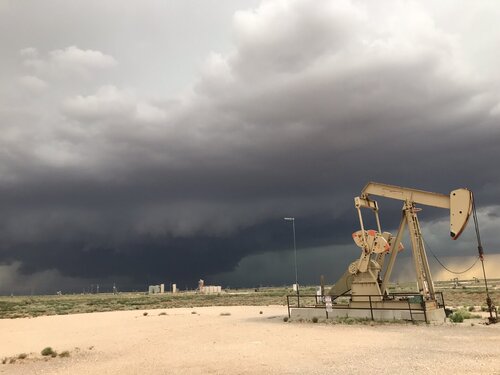 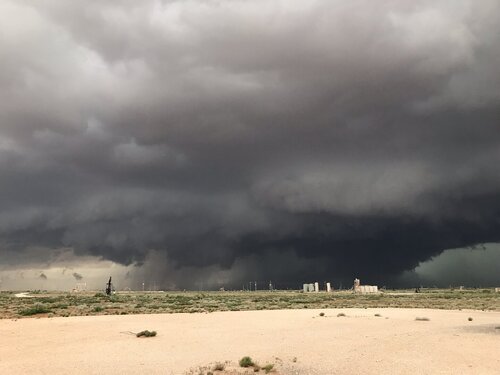 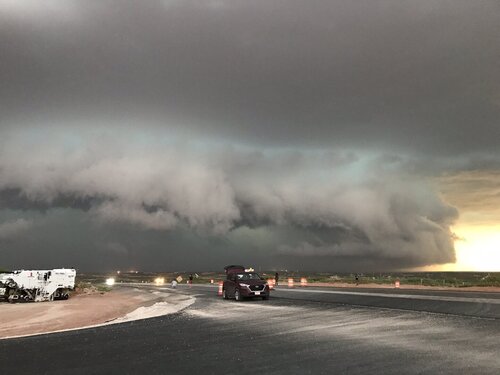 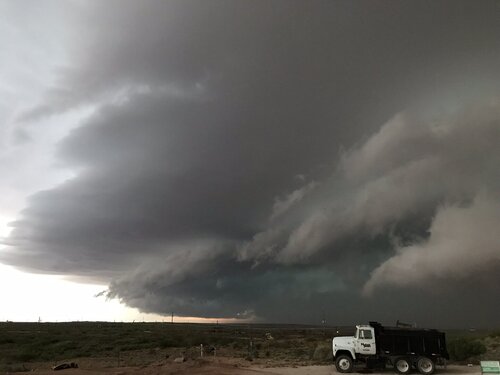 We ended the night in Hobbs. I love chase days when you can stay in a town not too far away and have the storm roll over you after you check into the hotel. I crawled into the back of our rented SUV, kept the hatch open, and watched the action while eating cheese and crackers and drinking a beer.

As an epilogue to my overall chase vacation, the only reason we made such a long drive from Wichita on this Sunday was because the action was to be down in SE NM for a couple more days. However, when we woke up on Monday, it didn’t look that great. There was a slight risk but no tornado risk. And the next day, Tuesday, mid level flow was going to be even weaker. Nearing two weeks on the Plains, with a ton of work issues piling up back home, I just couldn’t justify staying out for marginal risks and lost my motivation to continue with more high effort / low reward days like the previous one. So we decided to take our chances in CO on Monday the 3rd (which looked better, and at least had a 2% TOR risk, though nothing much happened), continuing up to Denver on Tuesday the 4th and flying home on the 5th. Of course, we kicked ourselves watching repeated TOR warnings near Roswell on the 3rd, and then on the 4th despite the weaker flow there was a 2% TOR risk (even though there hadn’t been one Monday, go figure) and a confirmed tornado near Alamogordo. I guess that’s the way it goes. But I still think it was the right thing to do, I was able to get back to work without pushing it with time away, and we were able to break up the long drive to Denver across two days instead of one.
Last edited: Jun 16, 2019
Reactions: James Taylor, GPhillips, David Petri and 6 others
You must log in or register to reply here.
Share:
Facebook Twitter Reddit Email Link
Top Bottom