After chasing Southwest Texas the previous day, I decided to hang around and chase again on May 31st. Although some parameters, such as deep layer shear and large scale forcing appeared less favorable than May 30th, there was more destabilization on this day and it was another setup with substantial directional shear. The end result was the potential for at least a few supercells once again.

I started around Fort Stockton and waited for storms to mature a bit after developing off the higher terrain. I headed southwest once a pair of storms started to show supercellular characteristics.

Near Alpine, the western of two main storms was showing some low-level rotation and a fairly well-developed wall cloud. The storm passed almost directly overhead, but it ultimately did not produce. There were some appendages and scud that vaguely resembled a funnel, but there was no reason for me to believe that this was a true funnel cloud. 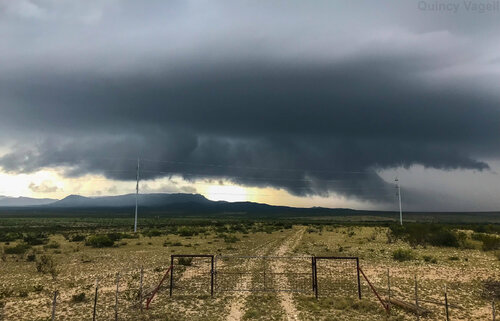 I next went south and then east. Due to a limited road network and poor cell service, I ended up wandering off course, rushing east toward a storm that was weakening by the time I made it to Sanderson. As a reference point, this is only about 20 miles away from the Mexico border. My initial plan was to just bail this storm chase entirely at this point, as if I wanted to chase Kansas the following day, I was already about 12 hours away.

By the time I had radar data again, I opted to head back west and keep chasing, as I didn't want to go all the way down to nearly Mexico, only to bail out with a few more hours left of daylight. I made it back to the Marathon area, just in time for a slow-moving supercell that was drifting along, just to the north. I watched this storm for a while and the only thing of much note was that a brief landspout formed. I don't count it as a tornado, for my chase stats, especially since the dust swirl was clearly disconnected from the storm or any cloud base.

https://twitter.com/i/web/status/1134663813821796353
The next move was west, as another supercell was moving directly toward Marathon. I toyed with the idea of finding a place in town to park safely to watch the hail come in, but the only few overhangs I found did not seem very safe and since I was not certain how large the hail might be, I moved south a few miles.

I watched the hail core pass over town and there was some hail, approaching golf ball size, on the southern fringe of the storm. 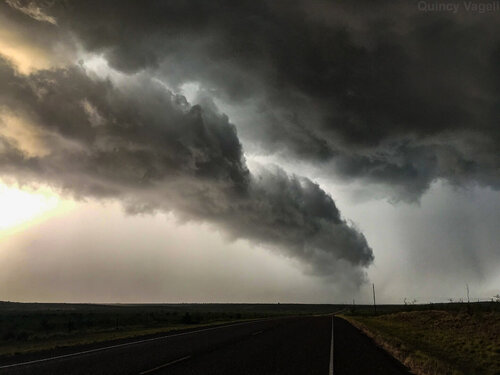 Once I went back into town, there was quite a bit of hail, but large amounts of generally 1.00" or less in diameter. There roads downtown were covered in a blanket of white and although it was tough to drive through, roads weren't completely impassible. On my way back north to Fort Stockton, I barely made it, as excessive rainfall/melting hail was causing some roadways to be washed out. Luckily, I was able to get north, as this would have been a major setback for the next day if I wanted to chase again.